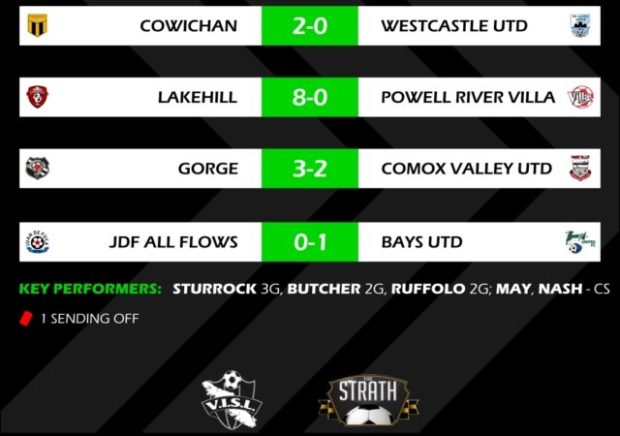 As the Province takes a turn with recent COVID spikes on the mainland, we are fortunate to be doing well presently through Island Health, allowing the Week 6 Vancouver Island Soccer League (VISL) action to be fully completed.

And what a week of action it was in the top flight, with the four Division 1 games producing 16 goals between them, three clean sheets, and a sending off. Here’s how things played out.

The only match on Friday saw with friendships being renewed between Cowichan FC and Westcastle United. While some of the personnel has changed, memories have not.
Cowichan earned their first points of the season with a 2-0 win over the boys from Westshore thanks to a Travis Brown goal and Thompson Nelson adding one in the last moments of the game. Earning the shutout for the bumblebees was Braeden Nash.

Saturday saw Lakehill host Powell River Villa at Braefoot Park, and it did not go well for the Powell River team, who found themselves on the wrong end of an 8-0 shellacking. Blair Sturrock hit a hat-trick for Lakehill, who also saw goals from Jon Shah, Dorian Colopisis, Andres Algarin, Simon Norgrove, and Jake Dziwenka. Daniel Zadravec had the shutout.

Saturday also saw Saanich based team Gorge FC defeat Comox Valley United by score of 3-2. Matteo Ruffolo grabbed a pair for Gorge, with Chase Haagensen getting their other goal, while Joe Butcher scored a brace for Comox.

Saturday finished up with league leaders Bays United blanking Juan de Fuca Allflows 1-0 thanks to a Salem Almardy goal, extending their league at the top of the division to six points. Notching the shutout was keeper Ethan May.

The Highlanders and Nanaimo had the weekend off, leaving the VISL Division 1 standings as follows after Week 6: 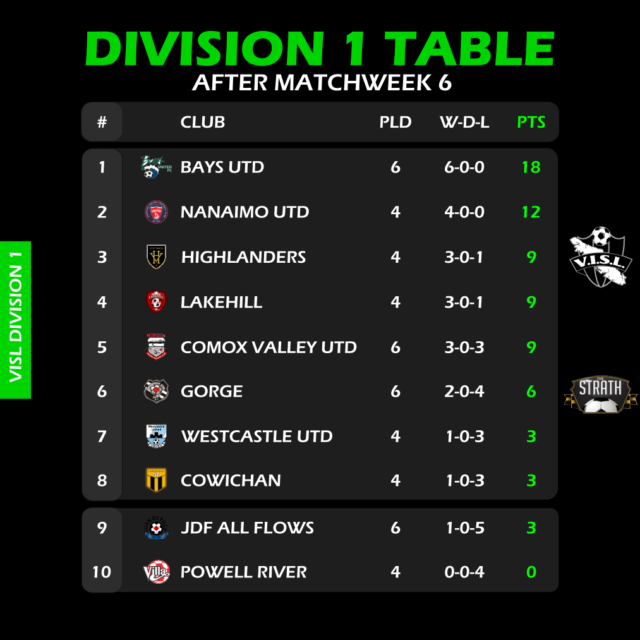 Bays still lead the way at the top of the division and, along with Nanaimo, remain the last two teams to have not dropped any points yet this season. Nanaimo now have tow games in hand on Bays.

Both the Highlanders and Lakehill are very close behind, losing just the one game each.

A couple of results really made the next part of the division tighten up as Comox, Gorge, and Cowichan have become close. Rounding out the bottom of the division is Juan de Fuca and Powell River.

Goal wise, Blair Sturrock of Lakehill had a good showing, and that creeps him up the leaderboard. But leading the way is still Grayson Chalifoux of Comox and Ian Whibley of Bays. 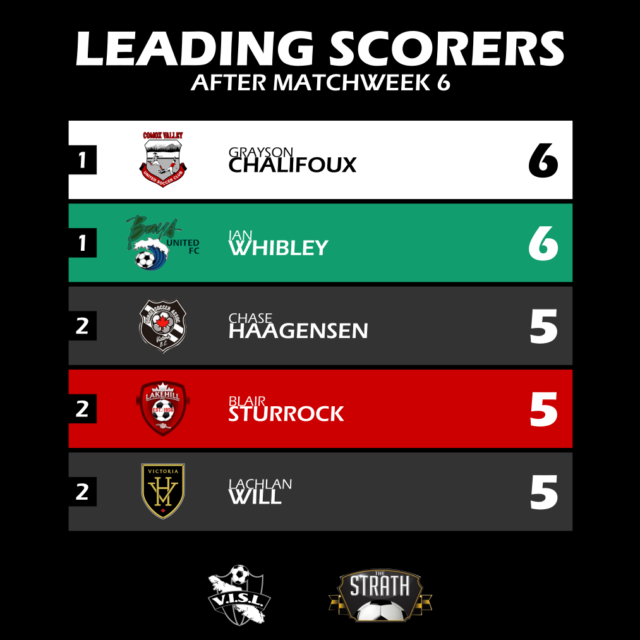 As far as the defenders of the goal, the leaderboard does change a bit. Joining his Bays partner Andrew Flello in the top five is Ethan May, while Geoff Hackett of Nanaimo still leads the way.

We’re all happy to have reached a third of the season completed. Knocking on wood; hoping we all remain healthy and are able to continue playing soccer in a safe manner.

After a day of remembering and being thankful for all we have, the VISL top flight is ready to get back on the field in Division 1 League play. Barring any further announcements that may have restrictions on our regional games, here is what we have in store for the weekend. 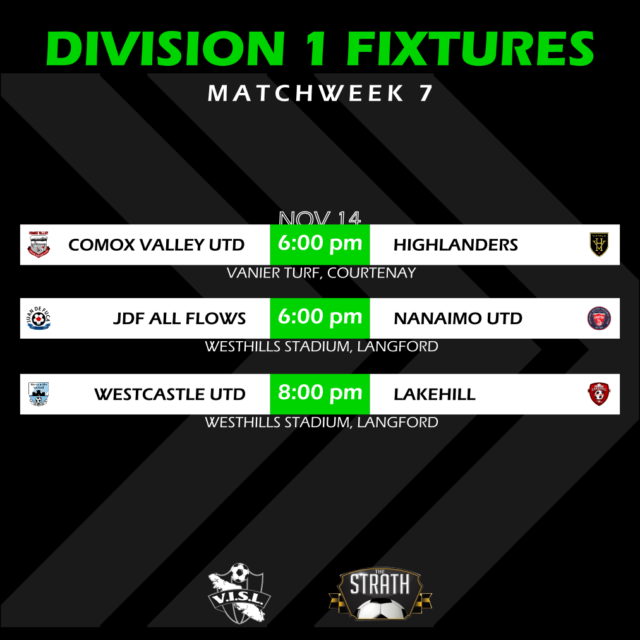 Thanks for supporting your local community, and grassroots soccer!