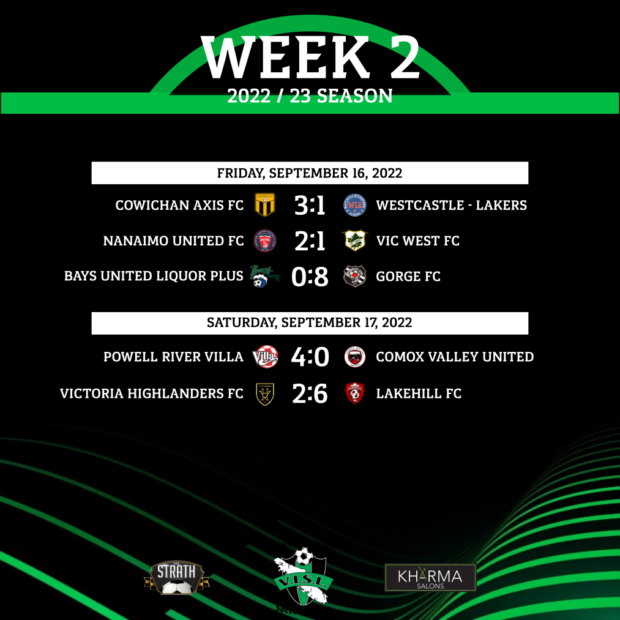 A stunning weekend up and down Vancouver Island saw all top flight amateur men’s games played in glorious conditions. Here is a quick snapshot of what took place in Division 1, some of which was close and pretty, some not so much.

Friday saw a very tight affair in Nanaimo as the defending Jackson Cup Champions Nanaimo United rebounded after last week’s shutout loss to slip by Vic West 2-1. Marcus Cramb and Paddy Greig were on target for Nanaimo, while Vic West’s goal was scored by Kaelan Cooke.

Saturday started out with a match at Timberlane Park in Powell River, with the hosts Villa defeating Comox 4-0 after goals from James Timothy, Jake Kenmuir, and a Niko Cristante brace. Supplying the clean sheet for Villa was keeper Matt Liknes.

Saturday wrapped up with an interesting game at Starlight Stadium as Lakehill defeated the Victoria Highlanders 6-2. The opening half was completed with a scoreline of 1-1, then things opened up in the second half. Lakehill had goals from Craig Gorman, Parm Johal, Jack Hill, and an Isaac Koch hat-trick, while Jameson Kiezik and Elijah Bean got on the scoresheet for the Highlanders. 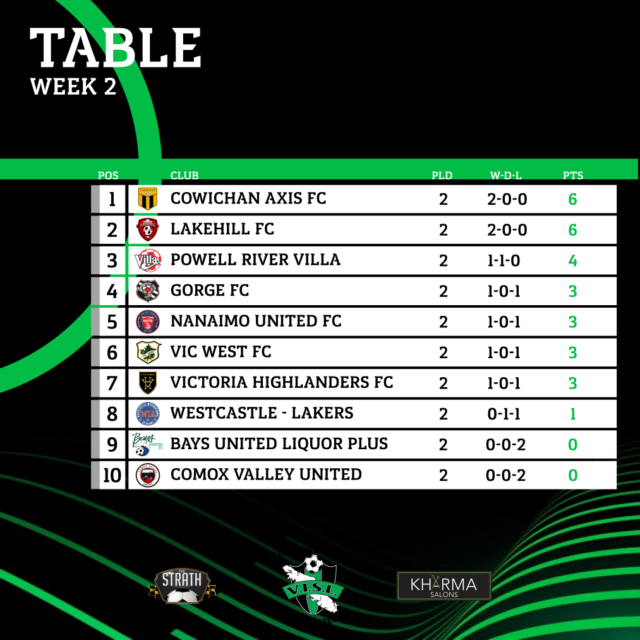 No surprise seeing defending Garrison Cup champions Lakehill at the top of the table, but a few eyebrows lifted seeing Cowichan Axis up there.

The Golden Boot leaderboard had plenty of adjustments and here is what it looks like after a couple weeks gone by. 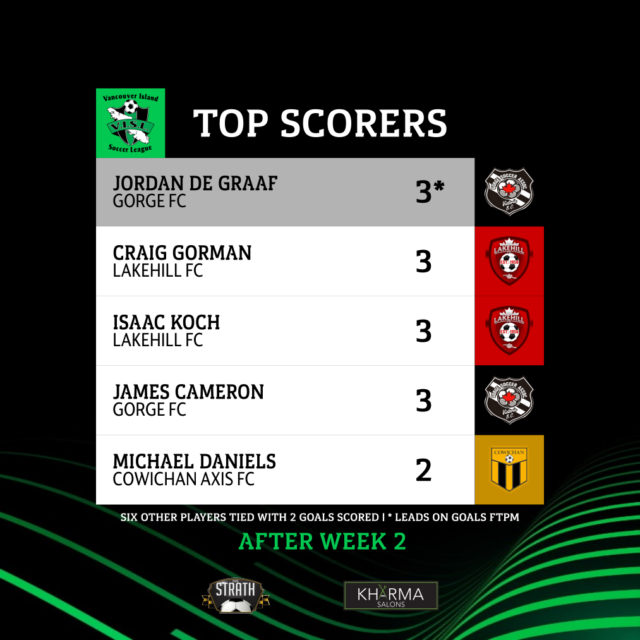 A great weekend of local grassroots soccer on the Island. Here’s hoping the decent weather continues as we look forward to week three.

Friday gets started with what might be the most interesting match of the weekend as Gorge hosts Nanaimo at Hampton Turf. Both teams are coming off wins this past weekend as they opened up the year with losses. Gorge will be in tough, but do have home field advantage. Should be an interesting score line.

Friday also sees Vic West hosting the Victoria Highlanders. Both teams are coming off losses and will be hungry for full points. Look for the Highlanders to use their youth and speed to out run the Vic West team.

The final game of the night has Bays United hosting Cowichan at Oak Bay High. Cowichan is hot and will look to take advantage of a struggling Bays squad. This will be a tough game for the hosts as they look to get their first points of the season.

Saturday sees Powell River Villa come down Island and play Lakehill at Braefoot. While the Villa squad is enjoying a great start, they will be in tough to take down a Lakehill team who is looking strong.

Saturday wraps up with a game in Comox as Comox Valley hosts Westcastle. Westcastle will look to use their youth and pace up against the more experienced Comox team. This should prove to be a good battle at Vanier turf.

Here’s the full breakdown of what’s on the slate for this coming weekend: 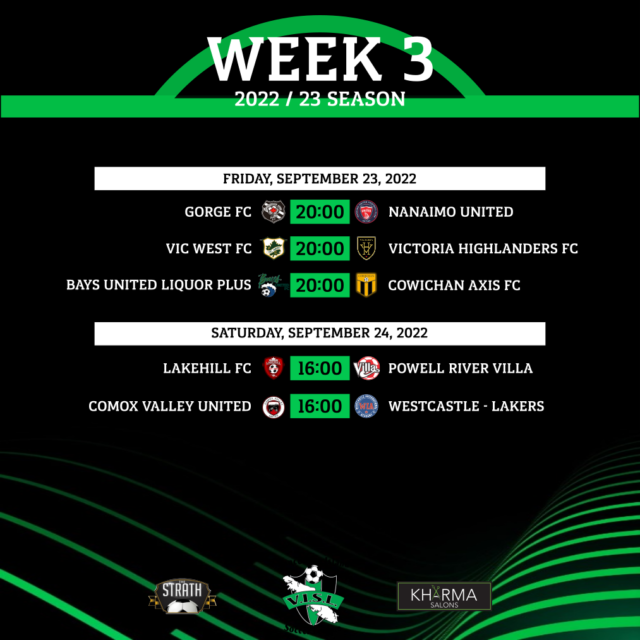 Most will think that Cowichan and Lakehill will stay undefeated after the weekend is said and done. There’s some other interesting games on tap, and those will clearly give an indication of where teams are heading at the early stage of the year.

Hope to see you out at a match, enjoying local amateur men’s soccer, and supporting people in your community.