Amazingly, the weather cooperated Friday and Saturday, so all games were played in very good conditions.

The top flight in the Vancouver Island Soccer League (VISL) had several key Week 3 matchups this past weekend, and by the end of it, three teams remain undefeated to start the new season, with two still maintaining 100% records.

There was a running away theme for the weekend, and it started off on Friday night as the Highlanders defeated Gorge 5-2. The game was all even in the first half, then the young academy kids ran away with the game in the second. Isaac Irwin, Wyatt Davis, Matthew Plaath, Leonard Enekegho, and Godwin Babu scored for the Highlanders, with Gorge’s goals were scored by Dominic Colantonio and Nic Fusick.

The Game of the Week was next up, and it had Lakehill defeating Nanaimo 3-1. It looked like Lakehill were going to run away with the game in the second half, after a brace from Blair Sturrock and a Jon Shah goal had put them three up, but Nanaimo were able to sneak in a goal from Declan Brown near the final whistle.

Over across town, at Oak Bay High, Westcastle and Bays Utd battled to a 2-2 draw. Bays had the opening goals from Kiyoshi Croke and Patrick Nelson, before Westcastle scored two second half goals from Yassin Guitouni and Norbert Cedric.

Saturday saw Powell River make their first roadtrip of the year, and Vic West defeated them 3-0 at Finlayson. The home side carried the majority of play, and surprisingly did not run away with the game. Scoring for the Greens was Isaac Agyeman, Derek deGroot, and Jordan De Graaf, while earning the shutout was Vic West keeper Cameron Griffin.

The final game of the weekend saw Cowichan take down Juan De Fuca Allflows 3-2. JDF had the opportunity to run away with the game, but some determined and persistent defence allowed the bumblebees just enough time to slot a late game winning goal. A Dan Citra double and one from Ole Mackay saw Cowichan come away with all three points, while Devon Austin and Kane Johnson were on target for JDF.

So after all of that, here are what the standings look like after three weeks of VISL Division 1 action: 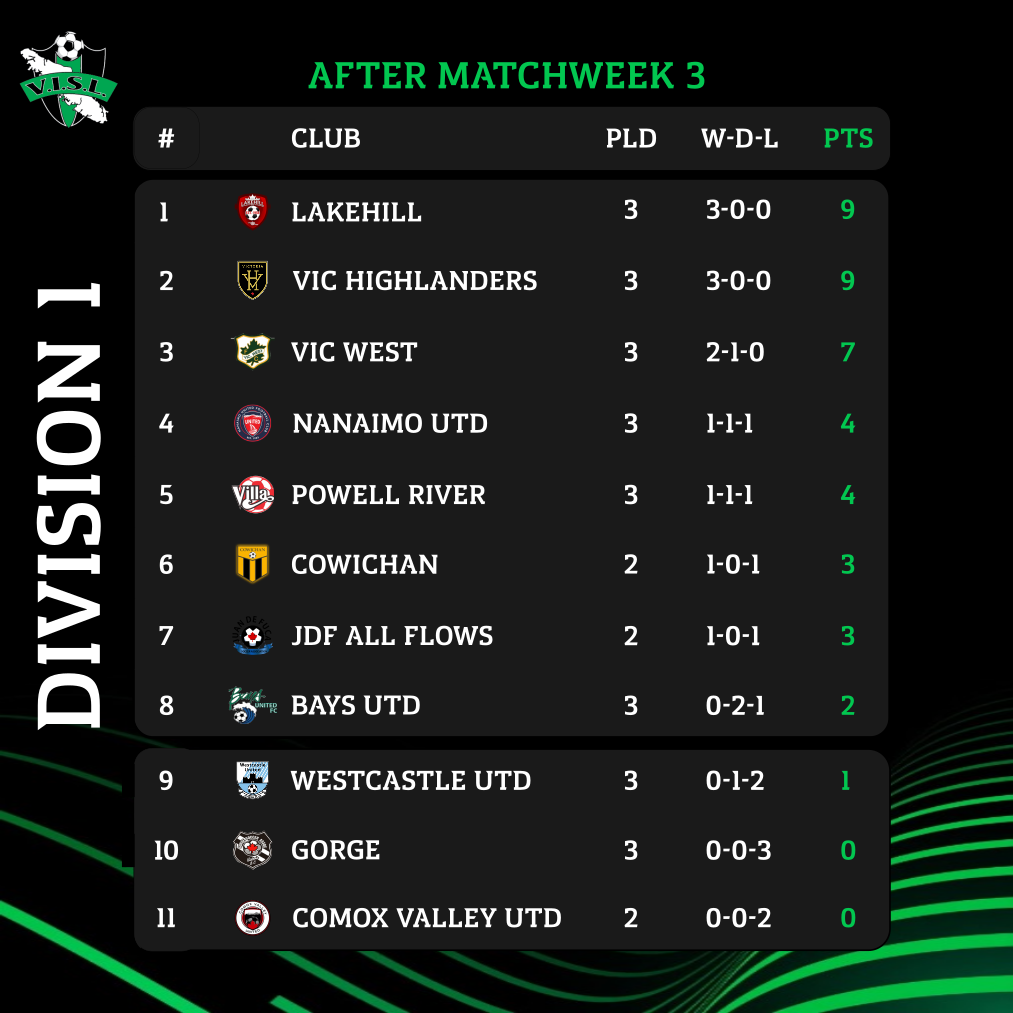 As it stands right now, Lakehill and the Highlanders are undefeated at the top with full points, and Vic West are just behind. Comox, Gorge, and Westcastle are all in the relegation zone looking for their first win of the season.

Just the one clean sheet on the weekend, so Cam Griffin joins Hardeep Gahunia at the top of the Golden Gloves listing. And on the goal scoring side of things, Matthew Plaath leads the way as he adds another goal, but the seasoned veteran Blair Sturrock is right there with him after a strong brace on the weekend. The top flight of amateur soccer on the Island has another full slate of games for the upcoming weekend.

As October hits, we are happy to have turf fields so games can be played as apposed to cancelled because of all the rain.

Here is what the weekend brings: 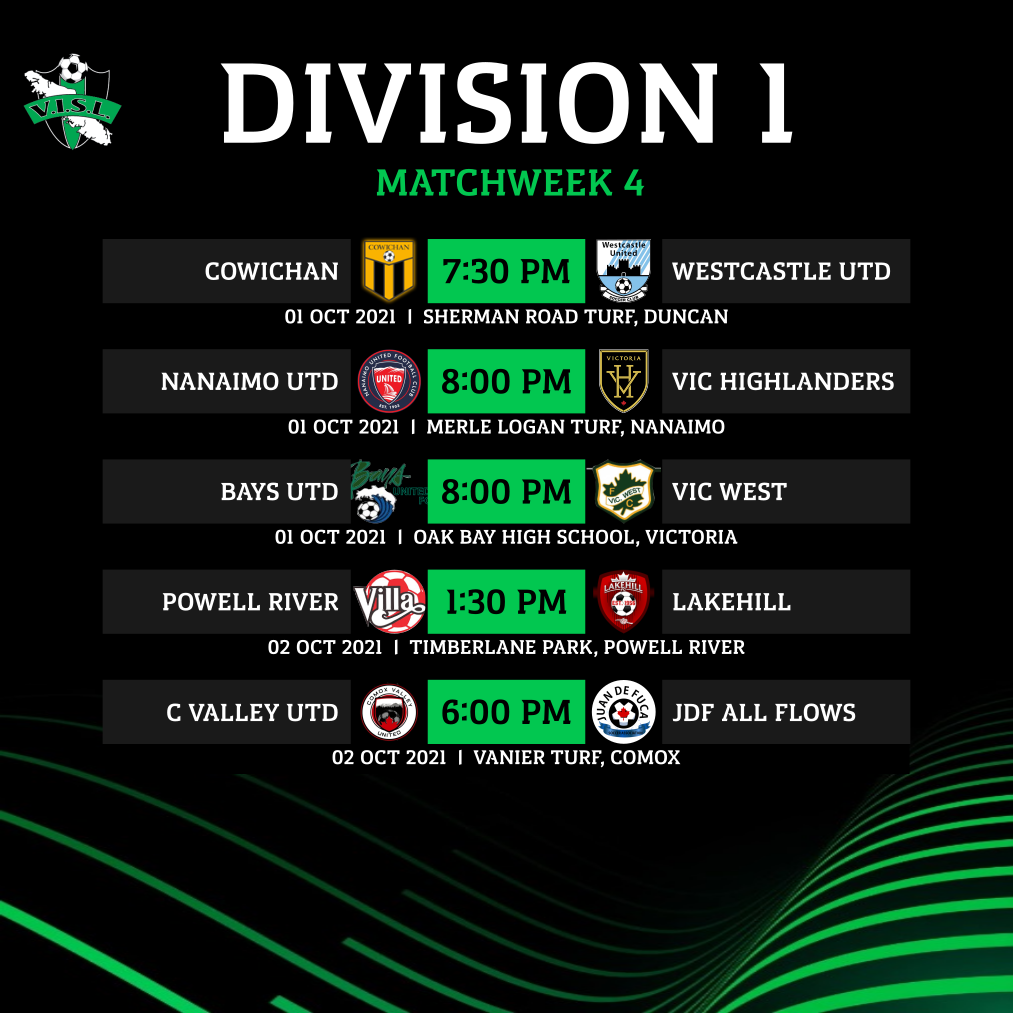 Finally, the VISL was very proud to finally award the latest President’s Award to the person thought to be the most dedicated within the VISL.

Typically done at the Strathcona Hotel on banquet night, past regulations did not allow for this, so field side on Friday night with some family and friends present was next best.

Our newest member to what is considered the VISL Hall of Fame is Bill Merriman of Mid Island. Bill joins a long list of people on the trophy who have given many years to the betterment of soccer here on the Island. Hope to see you at the park this weekend, enjoying local grass roots soccer, and supporting those who live and work in our community.