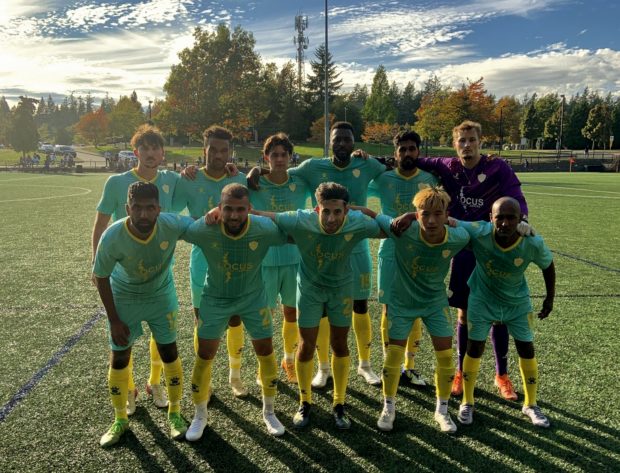 Just three points separate the top eight teams in the VMSL Premier Division after three weeks of competitive action of the new season.

There were a couple of shocks along the way in Week 3, with table toppers Coquitlam Metro Ford and Inter EDC both losing and the division’s last two unbeaten teams taking their place at the top of the standings.

Coquitlam Metro Ford Wolves had started their season with two impressive victories, scoring eight times along the way and giving up just a solitary goal. They headed up to UBC on Sunday afternoon to take on the also unbeaten VUFC Hibernian and it was the Thunderbirds boys that turned on the style, coming away with a big 3-0 victory thanks to a brace from Liam Robinson and an own goal.

That win sent Hibernian to the top of the table on seven points, one ahead of the Wolves, and they’re joined there by BB5 United CCB (pictured above), who were big 4-0 winners at Rino’s VSC Coastal on Saturday afternoon.

There were four different scorers for BB5 in this one with Caleb Clarke taking his Golden Boot leading tally to four goals, with the third of the game. Elie Gindo, Nic Morello, and Mason James.

Inter EDC stayed on six points after a 5-2 defeat to Burnaby Selects White Eagles on Sunday night at Burnaby Lake. Serhii Akuliinov hit a hat-trick for the White Eagles in this one, with Mladen Ljumovic and Vladyslav Matlash also getting on the scoresheet. Andres Rodriguez hit a double for Inter.

Croatia SC complete the teams on six points after a big 4-1 win over West Van at Ambleside on Friday night. Mario Kovacevic, David Malamura, Graham Meers, and Shea Wilson goals gave Croatia the win, with a third of the season from Alan McIndoe being all West Van had to show for their efforts.

Friday night also saw former champs BCT Rovers Hurricanes’ troubles continue as they went down to a heavy 4-1 defeat as well to Surrey rivals SFC Pegasus at Newton Athletic Park, leaving them pointless at the foot of the table and having shipped 11 goals through their first three matches.

Rafael Domingoes, Gurmaan Jhaj, Shabaz Khattra, and Sahil Sandhu got the Horsemen’s first goals of the new season, with Akash Sharma getting Rovers only goal of the game.

The weekend’s other match saw MAFC Elite come away with a 2-1 win at NVFC Norvan on Saturday afternoon. MAFC got their first win and first goals of the new campaign thanks to Alham Nazaryar and Kareem Shouhdy. Khalifa Fanne scored for Norvan, who are still looking for their first win of the season.

So with all of that, here’s how the VMSL Premier Division standings look after all the Week 3 action: 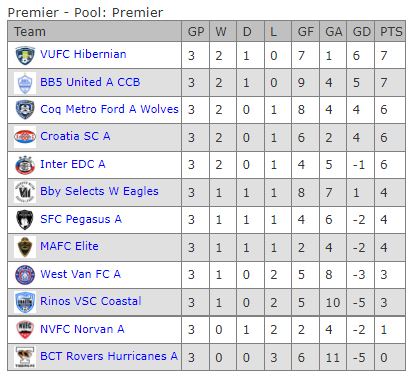 Some exciting games so far to kick off the new season and that is sure to continue this weekend.

Here’s what on the slate over the next three days in the VMSL Premier.