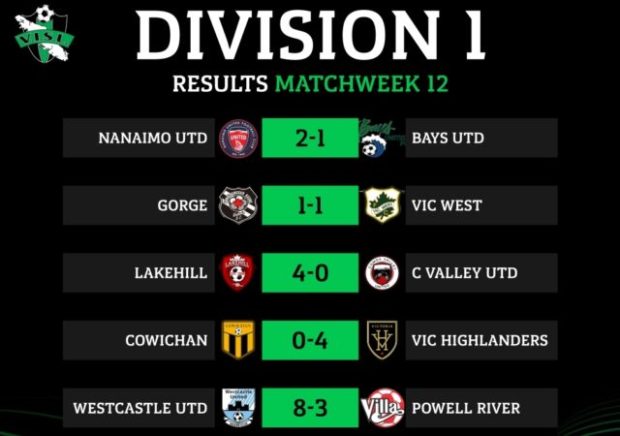 As predicted, the weekend results for the top flight of the Vancouver Island Soccer League (VISL) have caused a shift in the standings.

Division 1 was able to play all the games from the weekend, and here is what went down in another wet weekend on Vancouver Island.

Bays United made the trip north of the Malahat on Friday night, and they were defeated 2-1 at the hands of Nanaimo United. Hagon Kim and Hector Valdez did the damage for Nanaimo, while scoring the lone goal for Bays was Patrick Nelson.

Friday saw a great battle at Hampton as Gorge and Vic West fought to a 1-1 draw. Vic West’s goal was scored by Marcus Campanile, with Gorge’s goal scored by Dominic Colantonio.

Saturday had an early kickoff at Braefoot as Lakehill blanked Comox 4-0. Blair Sturrock had two goals for Lakehill, while Craig Gorman and Mark Kaiser added singles. Earning the shutout for Lakehill was goalkeeper Hardeep Gahunia.

So after all of that action, the VISL Division 1 standings look as follows at end of week 12: 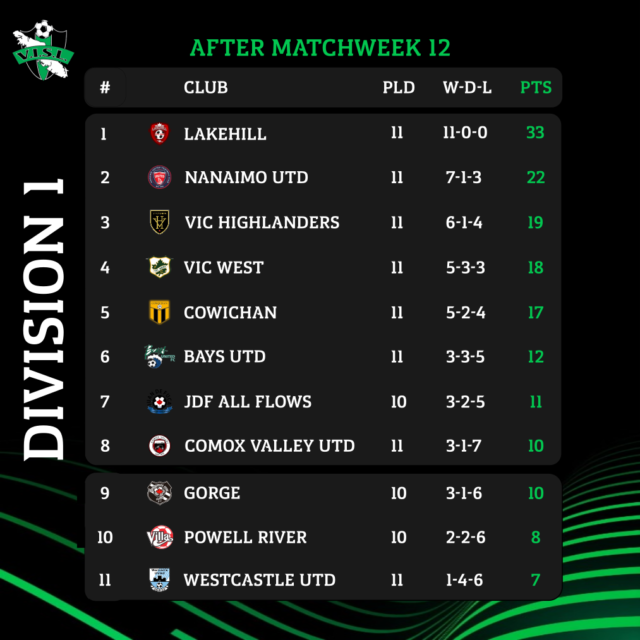 A Nanaimo win, coupled with a Vic West draw now has Nanaimo moving into second place. The Highlanders are alone in third now as a result of them blanking Cowichan.

A Gorge tie now has them level with Comox right at the bubble of the relegation zone. And the cellar dweller spot just got really stuffy as Westcastle punished Powell River.

The Lakehill win still has them atop the division, running away with things, undefeated.

Goalkeeping-wise, another shutout for Hardeep Gahunia of Lakehill has him atop the leaderboard with four clean sheets this season, two ahead of the competition in the race for the Golden Gloves trophy.

The Golden Boot leaderboard sees Blair Sturrock continue his drive for 25, adding a couple more goals this past weekend, creating some distance from the closest guys. Here’s how that race is shaping up: 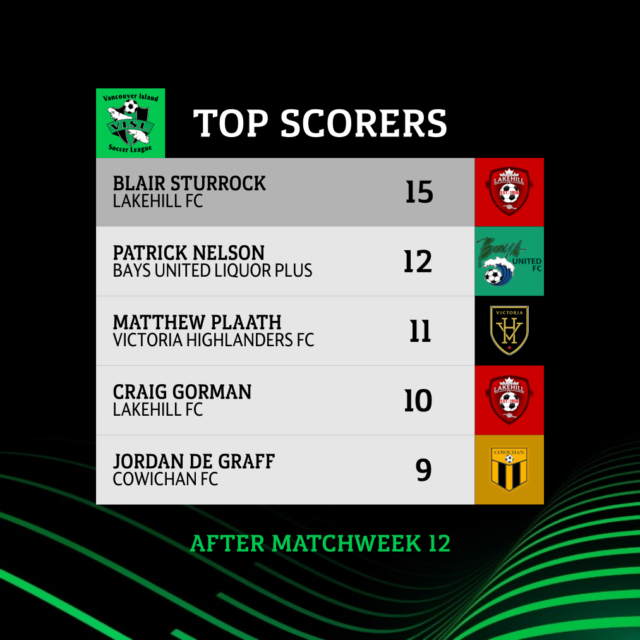 We were pleasantly surprised and happy to get in all our scheduled games for the division, even though a few others needed to be cancelled or rescheduled last minute. Along with other Leagues in the Province, we are happy to be playing the game we love.

With the weekend fast approaching, a full slot of games are ready to go. With any luck, the storms will stay away and we play some top flight amateur soccer on the Island. Here is what Match Week 13 has lined up.

There is only oone game on Friday night and it will be the battle of Saanich as undefeated Lakehill host Gorge FC at Braefoot Park on McKenzie Avenue. Everybody wants to take down the top dog, but it will be a challenge for the Black and White squad from the Tillicum area. They will have to deal with the Dynamic Duo of Sturrock & Gorman, and will need to stop them from scoring goals!

Saturday kicks off with the Victoria Highlanders hosting Comox Valley. Both teams are coming off opposite weekends, with one team winning by four goals, the other losing by four goals. Comox will be in tough for this match.

The Battle of the Westshore is next as Juan de Fuca Allflows host Westcastle at Starlight Stadium. Westcastle will look to build off their huge victory last weekend, and are desperate for points, while JDF will look to grab more points coming off a week bye. This should be a dandy of a match.

Next up, another road trip down Island for Powell River Villa as they take on Bays Utd. Both teams are coming off losses, and will be looking for full points. No doubt that both teams are feeling the angst of the relegation zone as it is close by, particularly for Powell River.

Closing up the weekend will be Vic West hosting Nanaimo at Finlayson Turf. The storied Greens are far from what some expected going into the season and will need to be in top form to give Nanaimo United a game. Nanaimo has been up and down this year, but are coming off a big win and will look to stay in 2nd place come Sunday morning.

Here’s the full slate of games and their kick off times:

We know only two things for sure – after the weekend games, Lakehill will still be in 1st, and Cowichan will still be in 5th. The rest will be up for grabs as the battle for 2nd place is heating up, and the battle in the relegation zone is already boiling hot. It should be an interesting weekend of soccer.

Thanks for supporting grassroots soccer and people in your community. You can find all the latest results, standings, and fixtures across all of the divisions at VISL.org.