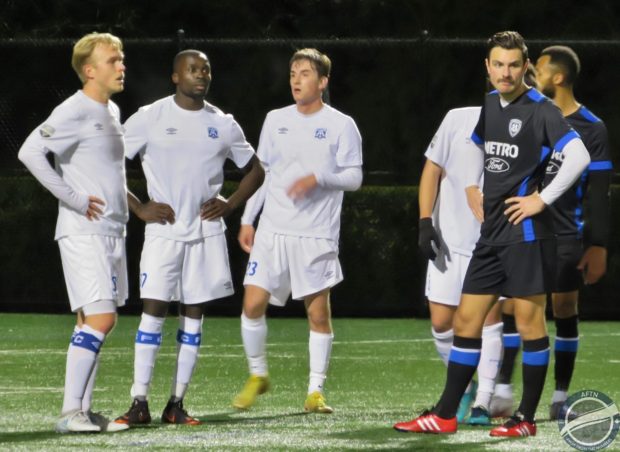 Another exciting weekend of Vancouver Metro Soccer League (VMSL) Premier Division action is in the books, with the six top flight matches producing 26 goals between them.

The Week 12 action got underway at Ted Fridge Field in Coquitlam on Friday night in a battle between 2nd and 3rd in the table and the match lived up to expectations in an entertaining encounter that saw third placed Rino’s VSC Coastal get the better of Coquitlam Metro Ford Wolves 3-1.

Metro Ford had the better of the play in the first half, but they were hit on a quick counter from Coastal 11 minutes in and Dalton San fired the visitors into the lead after finishing well from a cutback. Coquitlam pushed hard for the equaliser, hitting the bar midway throough the half, but Coastal were also looking dangerous with their speed in transition, and they held onto their lead until the 45th minute.

They must have felt they were going to head into the break one up but they had their pockets picked off a free kick just inside the Metro Ford half and Wolves broke forward quickly, playing in Carlo Basso who rounded the Coastal keeper to tuck away the equaliser.

That set up an interesting second half and it was Coastal who came out the sharper, restoring their lead three minutes after the restart when Sidrit Vukaj stroked the ball home. Both teams had their chances to add to the scoreline and when Metro Ford won a late penalty, a share of the points seemed on the cards but Basso blasted his spot kick high and over.

Coquitlam still looked for that elusive equaliser but it left them short at the back and they were punished two minutes into stoppage time when Bradley Richardson was played in on a quick breakaway and hit a third for Coastal to put the game to bed and seal the 3-1 victory that moved the Valley side up to second in the standings, three points off the top.

You can see our highlights of the match below or over on the AFTN YouTube channel.

While that game was playing out, there was drama at Burnaby Lake as nine man Inter EDC saw off Croatia SC 2-1 in a fiery encounter that saw Inter come from behind then have both of their goalscorers sent off for straight red cards!

Edward Tsen had put Croatia ahead 20 minutes in before a fourth of the season from Massud Habibullah five minutes later tied things back up. A 37th minute goal from Burhan Waisy earned the points for Inter, but while that was the end of the goals, it wasn’t the end of the drama.

A flash point just past the hour mark saw Habibullah sent off for violent conduct and three minutes later he was joined for an early bath by Waisy, who saw a straight red for serious foul play.

Inter fought hard for the remainder of the match and held on to claim a big three points, moving them level in the standings with Croatia.

Newton Athletic Park hosted Friday night’s final two games and BCT Rovers Hurricanes kept up their high scoring of late and bagged four goals for the second game running in a 4-1 win over West Van FC. Their talismanic Golden Boot leading Nick Soolsma added two more goals to his tally, taking his season’s tally up to 14, and Eric Brooke also hit a double for the Hurricanes. Aidan Izadi was the lone scorer for the Amblesiders.

BB5 had a number of chances to open the scoring, coming close on a few occasions, but it took some nice play from Yassin Essa to finally break the deadlock five minutes before half time. Two minutes later and BB5’s lead was doubled when Mark Talisuna shook off the attention of the last White Eagles defender, who was pulling him back by his jersey, to run in on goal and slot the ball home.

Caleb Clarke hit his first of the night six minutes into the second half, showing some lovely footwork in the box to make room and fire home and he grabbed a second from the penalty spot three minutes later. Essa rounded off the scoring with his second of the game in the 80th minute for a comprehensive win.

That victory keeps the Surrey side’s unbeaten record intact and keeps them atop the Premier standings by three points, with a game in hand.

You can see Sport Revolution’s highlights of the match below and on their YouTube channel:

Saturday’s action saw VUFC Hibernian head to Fen Burdett Stadium in North Vancouver and come away with a 4-2 win over NVFC Norvan after a storming second half comeback.

Bjorn Borren had put Norvan ahead in the 7th minute and Gordon Grice doubled their lead in the 34th minute to send the home side in with a strong lead, but the game turned when Borren was sent off after picking up a second yellow five minutes after the break.

Hibernian’s leading scorer Sebastian Dzikowski pulled one back for VUFC in the 56th minute and Spencer Wright tied things up 12 minutes later. Connor Mrazek then put Hibernian ahead for the first time in the 78th minute, before Dzikowski hit his second of the game in the 90th minute to seal the 4-2 victory and the three points.

That loss sees Norvan start to get cut adrift at the bottom of the table, four points away from the relegation playoff and five from absolute safety.

And it’s a similar tale for MAFC Elite who find themselves in exactly the same position after going down 2-1 to SFC Pegasus in a proverbial relegation six pointer at Burnaby Lake on Sunday evening.

The Horsemen came out strong and went in to the half with a 2-0 lead after Amitoj Arora’s 26th minute opener and a goal 11 minutes later from Kerman Pannu. Mohammad Karimipoursaryazdi pulled one back for MAFC with 20 minutes to go but there was to be no dramatic comeback and the Surrey side held on for the win. 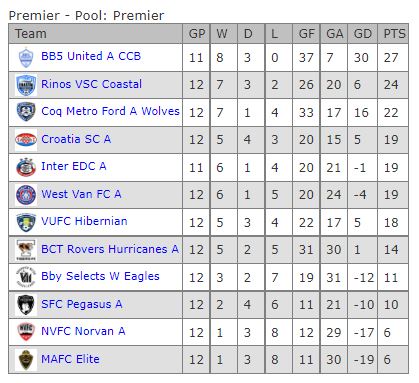