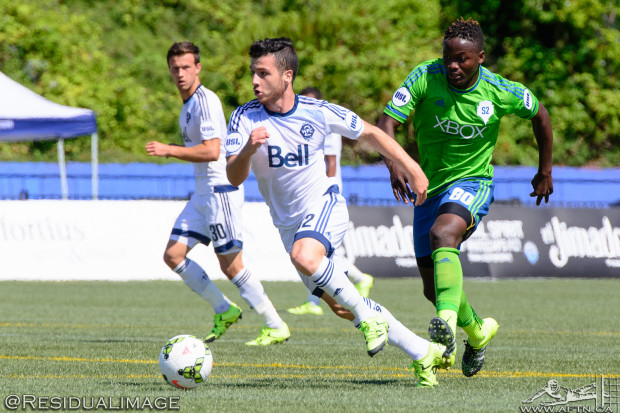 Of all the possible venues for Vancouver Whitecaps to call home to their USL team, the general consensus had UBC’s Thunderbird Stadium way down the list of ideal venues.

When the move to New Westminster’s Queens Park Stadium fell through fairly late in the day, after the local council refused to back the plan, the ‘Caps were left scrambling for a home stadium for the 2015 USL season.

UBC was available and soon announced as their forever home for the foreseeable future. Ideal for a lot of the players, especially with the ‘Caps training centre being located at the University complex, but for the fans, not a popular choice and the crowds suffered as a result.

UBC is a pain in the ass to get to for most. You’re most likely facing a long trek in from the outlying areas of the lower mainland or a cross city trek by car or bus that can sometimes feel like an eternity. As a fan, you’re also pretty far removed from the pitch, one marked with multiple sports lines, the seating isn’t the most comfortable and parking is expensive.

It doesn’t have a lot going for it and that, along with a lesser appetite for lower league football than you would have hoped to see, the Whitecaps averaged a crowd of 1,682 (tickets sold as opposed to bums on seats clearly) for their 14 USL home matches last season.

Attendances are far from being the main driving factor behind the ‘Caps USL side. Development is the prime concern and they would play on the moon if it did the job. There would be less atmosphere there mind you than at UBC.

Would WFC2 have drawn bigger crowds regularly in New West? Or in Surrey, Coquitlam, Burnaby, Langley or wherever else? We don’t know for sure, but you have to feel they’d have been in with a shot of doing so.

But more importantly, having the USL side in one of those communities helps identify the Whitecaps as a club for all of the lower mainland and BC, not just Vancouverites.

Right now, you just have to get a skytrain in to downtown on matchday to see how many fans are travelling in for the games at BC Place. With that in mind, getting the club, at all levels, into more of their local lower mainland communities is a key focus for the ‘Caps. As well as rewarding and strengthening their existing support there.

“We felt like there was an opportunity to explore some different markets,” Whitecaps COO Rachel Lewis told us at Friday’s media day about taking the two USL games to Langley. “Particularly this year, given that all MLS membership season tickets include three vouchers to WFC2.

“We felt that there was an opportunity to take a couple of games out to Langley and try to attract some of our fans that live in the valley and give them easier access to get to a game and try out the product.

“UBC is challenging at that time of year because of their football program. It does dominate the stadium. So we just thought it would create a better experience for them to go somewhere else during that busy UBC football period and felt that Langley was a great choice for us to expand [to].”

The Whitecaps will now test the water in Langley to see if there is a desire and demand to watch the USL amongst that, and surrounding, communities and they’ve picked two games to showcase the team.

The matches on August 21st against Arizona United, and an afternoon Labour Day Monday holiday Cascadia derby against Seattle Sounders 2 on September 5th, are the two games chosen. The latter, in particular, should pack them in.

WFC2 head coach feels the games are an important step for Whitecaps fans around the region to buy into what the Whitecaps are trying to do with their USL side.

“I think it’s huge,” WFC2 head coach Alan Koch told AFTN. “We’re part of a pyramid within the club and we want everybody to be a Whitecaps fan. If it’s coming to support Whitecaps 2, and that brings you into the club, it’s fantastic.

“If we can take the team into a community where maybe some people wouldn’t normally go watch a club game, either at BC Place or at Thunderbird, that’s great. I’m sure the people will come out and support and us, and we’re excited to go there and embrace them too at the same time.”

It won’t be the first time that the Whitecaps have taken their second team to Langley for a match and the last time was coincidentally against Seattle.

The ‘Caps and the Sounders played a MLS reserve league game at Langley’s
Willoughby Community Park in July 2013, and it was a huge success, with a four figure crowd (officially 1,077 but it felt more) boisterously cheering the Whitecaps on to a 4-0 thumping win.

McLeod Stadium will play host to the two USL games. The Athletic Park has a
2,200 capacity grandstand, with scope to add more temporary seating, and in a nice nod to the past, features the scoreboard that was used up at Empire Field for the Whitecaps inaugural MLS season.

Will the ‘Caps pack them in for these two matches? Our gut feeling is yes, but in the grand scheme of things, if the matches are a success, you can be sure you’ll see more games coming out to Langley and/or other communities down the line.

A precursor to a permanent move to a nice new soccer specific stadium for WFC2 in the future? Fingers crossed on that one.