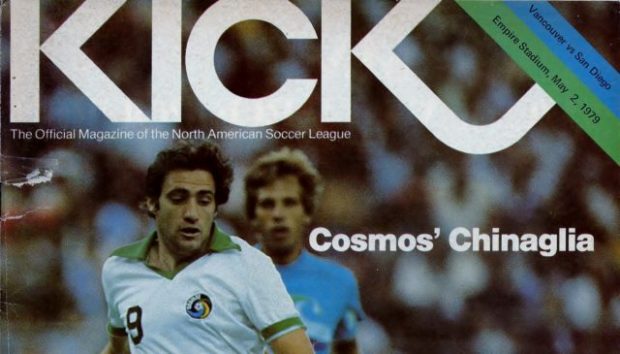 Week five of the season saw the Whitecaps play two matches in a five day span in and a home and home series with San Diego Sockers.

This was only the second season in the league for San Diego in this incarnation, having started in Baltimore in 1974 before moving to San Diego as the dreadfully named Jaws (good to tie yourselves in to a movie about deadly shark attacks!) in 1976. They lasted a year there before moving to Las Vegas, a stay that also lasted just a year before they moved back to San Diego once again in 1978.

At least they finally stuck there and actually continued in existence until 1996, 12 years after the North American Soccer League was long gone, and were the last NASL franchise to fold. For all of MLS’ flaws, at least we don’t have teams ping ponging around the country, Austin debacle aside.

Friday April 27th 1979 saw the Whitecaps travel to San Diego for the first of back to back home and away matches with the Sockers. 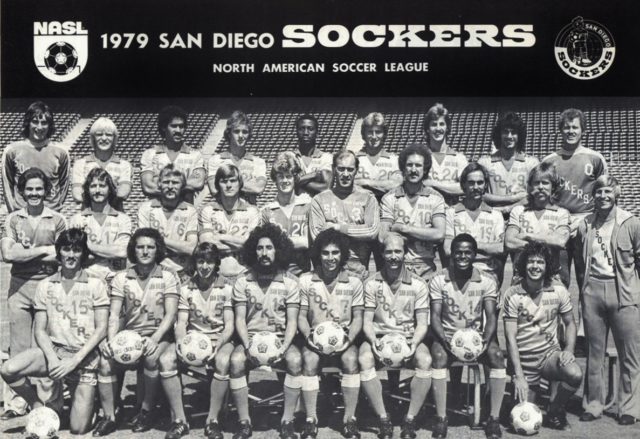 The ‘Caps headed California in confident mood after three straight wins and they dominated possession, playing most of the game in the San Diego half at Jack Murphy Stadium. But it was to count for nothing as they lost 1-0 after conceding a goal to the Sockers one and only breakaway. German defender Peter Nover got the goal to send 10,514 fans home happy, and leave the Whitecaps ruing their inability to take their own chances. The more things change…

They didn’t have to wait long to get their revenge though. Five days in fact, with a 3-1 victory on Wednesday May 2nd in front of 16,985 fans at Empire Stadium.

This time the Whitecaps weren’t going to be denied and they got off to a blistering start. Trevor Whymark finished off a Kevin Hector cross just 92 seconds in. Just over a minute later and Hector himself added a second on a great solo effort.

Vancouver were against dominating the match, but San Diego stunned them, and the partisan crowd, three minutes into the second half when Peter Nover once again found the back of the net to reduce the deficit to one.

Any hopes of a Sockers comeback were quickly dashed and another solo effort from Hector wrapped up the victory for Vancouver.

So a 3-1 final and four wins from their first six matches. Oh to have that today!

The Kick magazine for the home game against San Diego was as packed an effort as always. New York Cosmos icon Giorgio Chinaglia graced the cover, which also publicized a “How to watch soccer on television” feature inside.

The latter is a fascinating insight into what it was like to produce a football match for television back then, including the problems caused by trying to produce action for the 19 inch television screens of the day and the breakthrough deal with ABC to broadcast nine NASL matches nationally that season. 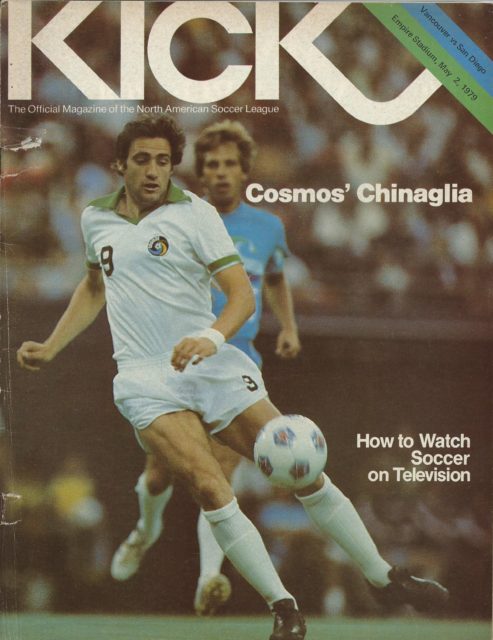 The Whitecaps player feature was on forward turned midfielder Leslie “Buzz” Parsons and his “just one year at a time” philosophy to his soccer life. The Burnaby born player was one of the locals on this Vancouver side. A home town hero much loved by the fans.

This was Parsons’ fourth season with the ‘Caps. The previous one he’d transitioned from a forward role into that of a midfielder and his performances suffered a bit as a result. It seems a strange decision looking back on it. Parson co-led the points production in 1977, but after his positional change his stats took a massive hit. Strangely, he actually started the Soccer Bowl game at right back!

The feature also covers Parsons’ play with the Canadian national team in World Cup qualifiers for Argentina ’78, the near career ending broken leg he suffered while playing for Canada in South America, the bleak time he spent in hospital down there. It says that’s a story for his memoirs, and certainly one we’ll ask him about at some stage this year.

An interesting tidbit that is revealed is that Parsons became heavily involved in the community Soccerama program and took charge of the Community Relations department in the ‘Caps front office, managing player appearances.

The four page feature and interview with Chinaglia is also an interesting and fascinating read. The Italian played in the NASL from 1976 to 1983, on a New York Cosmos side that included Pele and Franz Beckenbauer. The Cosmos won four Soccer Bowls in that time, and Chinaglia played a big part in that.

He was the league’s top goalscorer for four straight years from 1978 to 1981 and was named the MVP in the 1980 and 1982 Soccer Bowls and the league’s overall MVP in 1981. In the ultimate honour, the Cosmos retired his number nine jersey.

The feature paints a picture of Chinaglia as a shy man who didn’t enjoy public speaking appearances and got stage fright. On the football pitch though he was at ease, a special player and soon to be a legend of the game in North America.

Described as mercurial, the word often bandied around to describe difficult yet flamboyant players, Chinaglia was both loved and hated by the Cosmos fans, the latter due to the image of him portrayed in the media as cocky with a large ego. The Zlatan of his day? He even talked about himself in the third person as well.

“The people, they don’t really know Chinaglia,” he said. “They know only what they read in the papers and the media has created this image of me. When they meet me in person, they say, ‘You’re Chinaglia?’. They can’t believe it.”

Boos would often ring around Giants Stadium as his name was announced, soon turning to cheers as he banged the ball into the back of the net. He addresses that in the article.

“I don’t mind the boos,” he insisted. “They aren’t the true fans anyway. I must realize that mine is the most visible position in soccer. You can run and run and run and the ball doesn’t come. Then once, the pass is there but you’re not, and the people boo. You are either a hero or a bum. But when I score a goal, it is unbelievable. I don’t know where I am. For a moment, I am 3,000 miles away with the sheer joy of it.”

His ego was huge. He once said he was “more popular than the Pope” in his native Italy after helping Lazio win the championship and deemed himself to be the best goalscorer in the world. With 60 goals in 59 games for the Cosmos in 1978, it’s hard to argue against that claim. His coach Eddie Firmani knew how talented his striker was but described him as having “the emotions of a little boy”.

When the Cosmos lost a playoff game heavily to Minnesota, Chinaglia described his teammates as “a bunch of gypsies and thieves”. He was a real character and watching him in old NASL documentaries and reading this article, that comes across loud and clear. He died in 2012 aged 65 from complications from a heart attack. I wish I’d got to see him play and I wish I’d had a chance to hear his stories in person. He’s the kind of player that’s becoming harder to find in the modern game.

Other articles in the program this week were part four of a continuing feature on youth soccer, this time look at the parents and how they should encourage their children to play the game, an article on Canada’s U19 head coach Barrie Clarke, a four page feature on Portland Timbers continued improvement in the league, and the visiting player feature was on San Diego’s Hungarian midfielder Laszlo Harsanyi.

There’s also a fascinating feature on BC Sports Hall of Fame member Jack Cowan, who left Vancouver to successfully go and play for Dundee in Scotland in the 1950’s, winning two Scottish Cups before returning to play here locally and then retired to focus on his engineering career aged just 29.