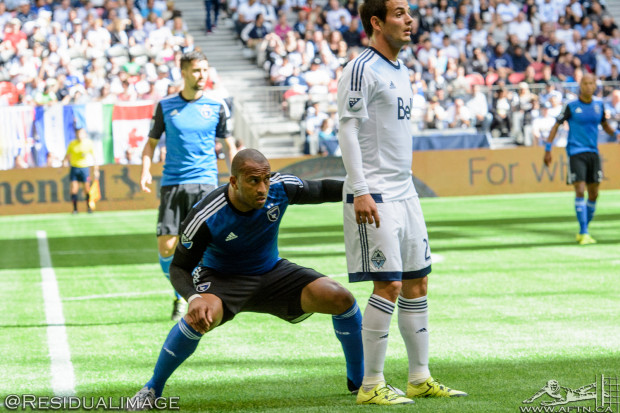 MLS wants parity. Well they’ve certainly got it this season.

In the Western Conference, nine of the ten teams will feel they have a shot at making the playoffs as we enter the final month of the regular season.

It really is quite incredible. And quite the logjam.

Amongst it all, Vancouver Whitecaps have been holding their own. Occupying the top two positions in the West for most of the season, they’ve led the league on several occasions this year. But they’ve not been able to grab that lead by the scruff of the neck and give themselves some breathing space.

They’ve had their chances, but when those around them have faltered, so have the ‘Caps. But results have continually, and incredibly, gone their way these past two months. Favours have been done to keep the ‘Caps at the top of the table. It’s not something that can surely go on for too much longer.

You almost feel it’s ordained that this is Vancouver’s year for the Shield but that is just foolish talk. Although the frustrating aspect of it all is that if Vancouver had taken even a fraction of the opportunities presented to them to take hold of the top of the table, they’d be walking away with the league at this point.

The Whitecaps know they can’t keep relying on others. With three defeats in their last four MLS matches, they know they need to start getting the job done themselves and pronto, but defender Jordan Harvey is confident the ‘Caps will soon get the wheels back on the wagon and get back to much needed winning ways.

“Every time we’ve gone through a loss or some sort of bad spell, we’ve come back on track,” Harvey told reporters. “That’s a credit to the consistency and not changing anything because that’s what’s really helped us throughout this year.”

The bounce back was meant to come last week at home to New York City. We all know how that ended. The less said about that now, the better. The new place for the fighting finish to begin comes tonight in San Jose.

And that in itself is not going to be easy. Never mind the fact that the Whitecaps haven’t won at the Quakes in their previous six attempts, San Jose are fighting for their playoff survival.

A ‘Caps win clinches them a playoff place, while a Quakes win moves them to within two points of Vancouver. It couldn’t be tighter and the Whitecaps know they’re going to be in for one hell of a battle.

“Everybody’s fighting for something, everybody’s got something to lose, so we’re going to go in like we have in road games and really be determined and organized and see what we come away with.”

It would take quite the sequence of results in this last month of the season for Vancouver to not make the playoffs now, in both their own games and others, but it remains a possibility. A possibility they can kill off by the end of Saturday night. If that isn’t enough to give the squad the kick up the ass they need, then I don’t know what will.

In reality, they don’t need that kick. Everyone at the Whitecaps is painfully aware of how important the next four games are for their season.

“We just need to get back on form,” Harvey added. “I’m really looking forward to this weekend because everyone was hungry this week, the training was sharp and going in to San Jose we have a good opportunity.”

Vancouver and San Jose have served up some battles on the pitch in recent seasons with less to play for, although a lot of the key instigators in those games have moved on. They’ve also served up some shocking games down in California, a couple of which I’ve had the misfortune to be at.

You have to feel it’s the former that we’ll see tonight and that’s exactly what goalkeeper David Ousted is expecting.

“They’re scrappy,” Ousted said of the Quakes. “They’re pushing for their push into the playoffs and it’s going to be a tough game. We know we have the quality to go and get a win. We just need to find that energy, to find that intensity and to match their scrappiness.”

Vancouver certainly need to be up for the scrap not only in this game but their remaining four matches this season. But Ousted also cautioned that it needs to be controlled if they’re to come away with the wins they need.

“Urgency is important at this part of the season,” Ousted added. “Every team we’re meeting is chasing the playoffs, is pushing and is going to have that urgency, so we definitely need to have it as well.

“It doesn’t have to be a panic or something that’s counter effective but knowing that going into these games we need to be on top of our game.”

The ‘Caps remaining league matches are evenly split. Two at home and two away. Those road games both come at places that Vancouver have yet failed to record a victory, San Jose and Dallas, but that doesn’t faze Ousted in the slightest.

“We’ve showed this year that we’re really good on the road,” Ousted said. “We’ve showed that we have the mentality that we can win anywhere we go, so I’m not that worried going in to away games. It’s some tough places we play but I’ve got confidence in that we can get away with three points.”

It’s a view shared by winger Kekuta Manneh, who feels that no matter where the Whitecaps are playing this month, they have to stick to their gameplan and use their attacking strengths to get the wins they’re looking for.

“For us, we’re going to try and approach every game the same, whether we’re home or away,” Manneh stated. “We need to win the [San Jose] game if we want stay in the title hunt. We’re going to out, attacking minded.”

But as we’ve seen in recent games, playing in that manner may generate chances galore for the Whitecaps but it doesn’t guarantee that any of them are going to be put into the back of the net.

And while the goals haven’t been coming at one end of the pitch, they have been at the other with two goals given up to both Houston and New York in the recent losses and three goals conceded twice to Seattle in two matches.

Both are aspects of the Whitecaps game we weren’t seeing even just a few weeks ago.

“It goes both ways,” Harvey admitted. “We’ve given up goals that at the beginning or the middle of the season we haven’t given up. We need to address everything and really get back to the basics and what we do well, which is being organized, hard to break down and we get chances. That’s the most important thing.”

The lack of goals for Vancouver may put additional pressure on the Whitecaps defence, but with 11 clean sheets already recorded this season, Ousted feels he’s capable of holding up his end of the bargain to reduce what’s needed at the other end of the park. But he’s confident a change to the ‘Caps fortunes is about to play out.

“Obviously you need to keep more clean sheets to get points,” Ousted said. “But we’ve got confidence in the goalscoring ability in this team. We’re creating chances and I feel like the goals are coming, but we need to tighten up as a backline as well. Not let in too many goals and if it’s a one-nil win, it’s one-nil win. That’s going to be ok by me.”