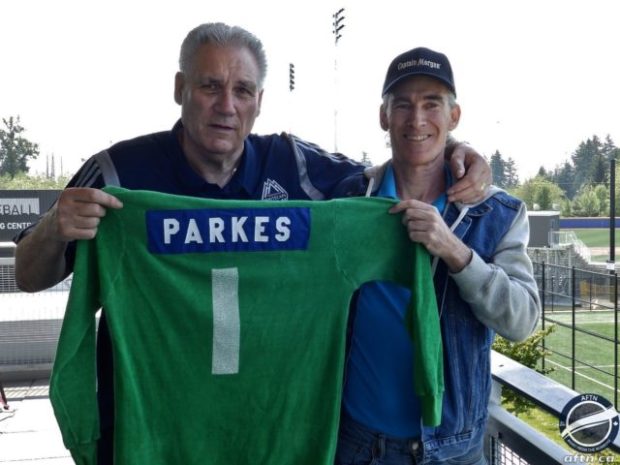 Forty years ago this week, American R&B duo Peaches and Herb were sitting at number one in the Canadian singles charts with their song Reunited. Fast forward 40 years and it was a case of reunited all over again, as a Vancouver Whitecaps legend was once again rejoined with one of his most famous jerseys.

An old jersey from New Jersey in fact.

Phil Parkes is a footballing legend on both sides of the Atlantic. The English goalkeeper had a 15-year career with Wolverhampton Wanderers, a club where he is still revered to this very day. Not a bad feat for a lad born in West Bromwich and who grew up as a rival Baggies supporter.

Parkes is also a legend in Vancouver, after four years a Whitecap, the last of which saw him lift the 1979 NASL Soccer Bowl.

Parkes is one of a number of that Soccer Bowl winning Whitecaps squad who are back together in Vancouver this week to celebrate the 40th anniversary of that historic victory and see head coach Tony Waiters inducted into the ‘Caps Ring of Honour at BC Place on Friday night before their MLS match with Toronto FC.

And there was a special presentation made to Parkes at the Whitecaps training facility on Thursday after local memorabilia collector Keith Watson reunited him with the jersey he wore in that famous 2-1 Soccer Bowl win over Tampa Bay Rowdies 40 years ago.

Parkes wore the jersey throughout the season, into the playoffs, and in the Soccer Bowl championship game itself at Giants Stadium in New Jersey and is an important piece of Vancouver soccer history.

“It’s an iconic piece of Vancouver sports memorabilia,” Watson feels. “The ’79 Championship team is revered in Vancouver, so I think next to the actual Soccer Bowl trophy itself, this is probably the nicest item you’re going to see in the BC Sports Hall of Fame. That’s where it’s going to go for the next year or however long.”


Watson tracked down the jersey by accident to an Edmonton memorabilia collector called Brad Foote and spent a few months negotiating with him to obtain it.

“Brad got in touch with Phil’s son Dean a couple of years ago,” Watson revealed. “So he has all of his shirts, team jackets, and soccer balls and what not that [Phil] had in the NASL. In February I noticed that he had all of his jerseys and I asked him if he would be willing to sell me one of the jerseys and he said no.

“Then I spoke to Jason Beck at the BC Sports Hall of Fame and told him to get in touch with this guy in Edmonton, he’s got Phil Parkes Soccer Bowl jersey, maybe he’ll loan it to you for the big display coming up here at the end of may, but no. He told Jason no three times.”

Undeterred, Watson made a final offer on the jersey of $1000 Canadian, but was again turned down. That looked like that would be that when a couple of days later Watson got an email from the collector offering to finally sell him the jersey for $1000 US. He eagerly agreed.

And once he saw it, Watson knew it was the real deal.

Watson brought the jersey along to Whitecaps training on Thursday, where it was presented to Parkes by current ‘Caps keeper Maxime Crepeau, in a nice passing of the guardianship of the goal moment.

The presentation surprised Parkes, in more ways than one.

“I want to know why my son sold it,” Parkes joked. “I thought I’d still got it!”

Watson plans on wearing the jersey to Friday’s night’s MLS match against TFC before loaning it to the BC Sports Hall of Fame for display.