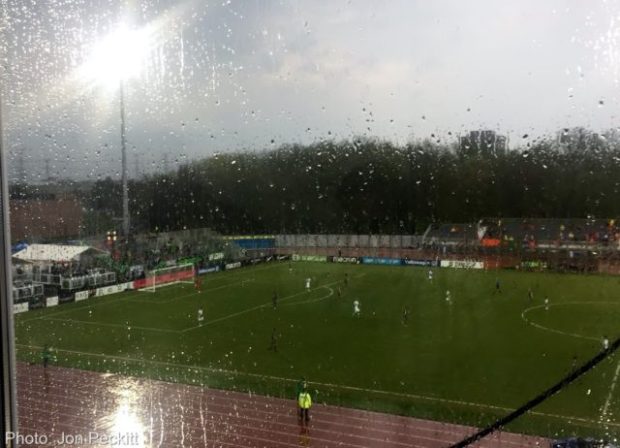 The forecast called for torrential downpour. In the early hours in Toronto, York9’s match against Forge FC appeared to be destined for a dark and gloomy affair. But by mid-afternoon, mere hours from kick off at York Lions Stadium the clouds parted and the sun shot through. York9 were hoping for a similar result.

Entering their first ever home Canadian Premier League match in league play (the true home opener was actually three nights earlier in Canadian Championship play against AS Blainville), York9 were sitting in last place in the CPL, although to be fair to York, they had played only three games in the league, all of them on the road.

Likely disappointed to be still searching for their first win of the campaign, York had so far seen two away ties and a loss to league leading Cavalry in Calgary, which isn’t the worst return imaginable.

Depending on how you look at the cup result, York could take solace in narrowly edging AS Blainsville of the PLSQ 1-0 over two legs, securing their first ever win as a franchise. On the one hand, they may have been expecting a more dominant performance against the lower division side, on the other, they were through to the next round, and picked up their first win as a franchise.

York knew going in they would have their hands full with visiting Forge FC. While Forge struggled in their first two matches in CPL play (a 1-1 draw in the league’s inaugural match against York, and a 2-1 loss in Halifax), wins against Pacific and Valour showed they can close games out and add some firepower to the mix. Not only that, but Forge lead the league with 8 goals in 5 matches entering this game.

One of the positives York could take coming into their home opener was that they had found the back of the net in all three of their previous road games. While never finding enough to nick a win, not being shut out is always a good sign from an offence that at times has looked disjointed, still searching for its most comfortable style.

The early going saw Forge confident to attack, with two great chances in the first four minutes. The pressure continued, with Forge showing great patience with the ball. York’s early chances were more sporadic. By the 15th minute, York began to look more comfortable in possession, having survived the early wave of Forge pressure. After a handful of good chances for York the game settled into a bit more of disconnected midfield battle, with both teams getting stuck in and created a myriad of half chances both ways. 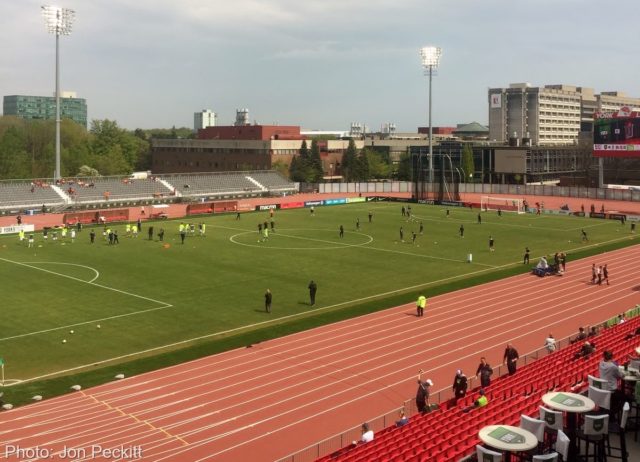 Going into half time the game remained deadlocked at 0-0, which was a fair scoreline. Possession and chance creation stats were almost identical for both teams at the halftime whistle. Nathan Ingham of York seemed the busier of the goalkeepers, being forced into a couple big challenges on a couple corners, and through ball opportunities. While Forge had the slight edge in possession and built up to a few more attacking opportunities, York 9’s defence was up to the task.

This was exemplified at the half hour mark when Emery Welshman had one of the better chances when he got on the end of a pass and was able to step around a defender and the onrushing Ingham. However, once he looked up and took his shot, three more York defenders were there waiting to easily clear.

York would go on to rue a pair of missed opportunities on set pieces, coming close with two corners. The first of which, Luca Gasparotto headed one just wide in the 13th minute, and in the 41st a partial clearance on a York corner landed right at Wataru Murofushi’s feet, who had the time to take a step and fire. The ball rolled harmlessly wide of the left post. One of the best chances of the half came in the 25th minute when Chilean striker got a rocket off from distance, forcing a spectacular acrobatic save from Forge’s Tristin Henry.

That set up the prospect of an exciting second half, but then. as if on cue, the second the players walked off at half time the skies opened up and the aforementioned downpour began, giving the field a brand new slick for the second half. This new environment would all but assuredly change the dynamic of the match.

The second half began with energy. Several half chances, defensive clearances, and a pair of substitutions later, the ref noticed the lightning in the storm approaching. The game was called temporarily in the 62nd minute with lightning and thunder.

Almost an hour after the game was called to a halt, the refs inspected the field and determined it was safe enough to continue. The storm had passed. The players returned to the field to get warmed up again. York started with the same vigour but ultimately two goes in quick succession for Forge ended York’s hopes of a winning homecoming.

The first goal came on the counter. Forcing a turnover Forge were able to get wide to Kyle Bekker on the right wing, who was able to play a smart low cross in for Chris Nanco, who only needed one touch to get the ball into the top left corner. There was no hope for Ingham between the pipes.

Eight minutes later a foul by Morey Doner, just inches outside the 18 yard box, led to a fantastically worked free kick. Bekker, again the creator, hit a low pass along the floor, seemingly to a waiting Nanco at the top of the 18. Nanco however had other plans, faking the shot, and allowing the ball to continue on to a waiting Tristan Borges who slammed home his league leading third goal of the season.

Borges later stated that the play, while it looked like one, was not a “straight off the training ground” kind of scenario.

“Well to be honest, it wasn’t something that we worked on,” Borges admitted after the match. “But I have to give a lot of credit to [Bekker], he called the play. I think we were doing very well in the corners. I think we saw something, leading into the play. Bekker told me something to do, a play we wanted to do, when I transferred the message to Chris, he understood, when the ball was played he let it go, and it was a good finish.”

A good finish indeed and the goal will likely have a chance for Goal of the Season. 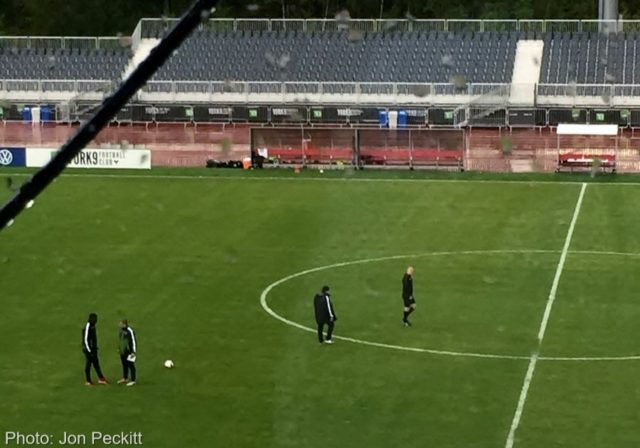 After the match, the rain delay was most certainly the story. York manager Jim Brennan lamented the timing of the break.

“I thought we were good,” Brennan said. “I thought we performed very well. We felt just before that delay we had them on the ropes. We had plenty of chances, lots of opportunities. We felt it was coming. That kind of delay took the wind out of our sails and trying to get back up out of it.

“Again in the second half our momentum kept taking us forward. We had good possession, plenty of shots today, I think 27 shots. Lots of opportunities, but couldn’t find the back of the net. They break on a counter and they score on us, but you know that’s the way the game goes. We’re frustrated the way it came about, obviously we felt we were the better team today.”

In the end, sitting waiting for the storm to pass for over 75 minutes, it would be difficult to keep everyone’s mind on the objective and maintaining that “game face” mentality. Forge managed it, York didn’t seem to be able to.

“It’s difficult right,” Brennan continued. “Keep the lads moving in the dressing room, don’t let the lactic acid build up. Just keep them ready, keep their minds focused on the game, because you don’t know what’s going to happen right?

“You don’t know if you’re going to be sitting there for three hours or 20 minutes, so it’s difficult. It doesn’t happen often in football, but when it does its a hard part of the game that you’ve got to deal with.”

“Yeah, it’s tough, when you’re coming into a situation like that,” Bekker felt. “Starting a game from a corner kick is weird. So we were prepping for that in the locker room because we knew that’s what we were coming into, and obviously it could have gone the other way, but everyone was doing good. We marked up and got through that, and we knew if we weathered that storm we would be fine.”

With that loss, it looks all but assured York will not be challenging for the Spring Season (especially with Cavalry being 5 and 0 in a 10 game season). Disheartening, but Brennan looks at this as an opportunity to grow as a team.

“If you look at it, we were the only team that’s started with four games on the road,” Brennan mused. “That’s difficult, but I think if you look at it, with the Canada Cup and CPL, we have three draws and one loss. We played our first home game the other day in the cup, won that game.

“We felt we were on the right track in the first 60 minutes [against Forge], but then came that delay and things didn’t go our way in the second half after the delay. For me, I think the boys have done great job. If you look at the stats it will tell you our passing percentages, our crosses, our shots that we had, the opportunities we had. The numbers don’t lie.” And Brennan is confident that the positive signs are there for the Fall season.

“The guys are getting there,” Brennan stated. “We’re a team that’s only been together what, three months. So we’ve got to keep learning, growing together. We didn’t have the luxury of a Calgary or an Edmonton, or even a Sigma where they have those core guys, so we’ve got to continue learning from our mistakes, growing as a team.

“This league is not a sprint, it’s a marathon. We have to make sure we keep progressing and doing things right. And if I look where we were first game till now, I think we are improving, starting to get our identity, who we are. I’m not worried about the guys we have in that dressing room, we will be fine in the end.”

Forge at this stage of the season are realistically the only team with a hope of catching the red hot Cavalry side, who improved to 5-0 on Saturday. Forge are now 3-2-1 and were not scored on in any of their three wins. Their last minute 2-1 loss to Cavalry at Tim Horton’s Field on May 12 may come back to haunt them in the final days of the Spring Season.