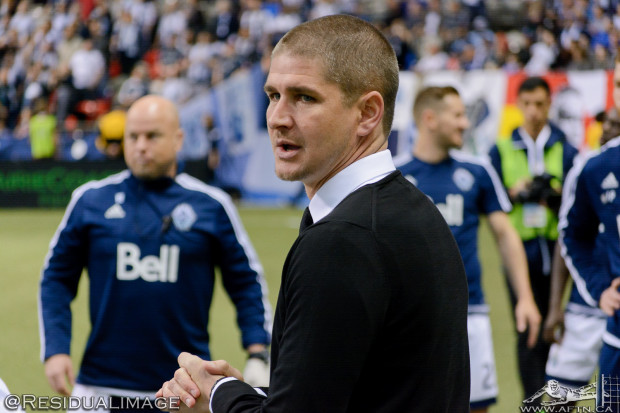 Coming off a tough road loss in Montreal on Wednesday, and with three defeats in their last four games, it’s fair to say that Vancouver Whitecaps are not a form team heading into LA to take on the Galaxy tonight.

Factor in that Vancouver have never won at the StubHub Center in seven attempts, nor even taken a point, have only scored two goals there and are facing an LA side who are unbeaten in three and haven’t lost a home match in their last 29 games in all competitions, and you’d be forgiven for thinking that the ‘Caps are going to bunker down, play defensively and hope to salvage any crumbs they can.

After all, they’ve done that before down in Carson, California. They’ve done it at other places on the road. Is this game another ideal opportunity for ‘Caps coach Carl Robinson to play his three man defensive midfield shield of Matias Laba, Russell Teibert AND Gershon Koffie? It worked to great effect at Real Salt Lake earlier in the season.

The answer would appear to be no, and the ‘Caps are going on the offensive against the defending MLS Champs.

“We’ve spoken it about it as a group of coaches,” Robinson told us on Friday on a conference call with AFTN and the Vancouver Sun’s Gary Kingston. “Up until this point, whatever way we’ve done it, we’ve never got it right because we’ve never won.

Robinson added that depending on how the game is going, you could see up to five attacking players on the pitch together for the Whitecaps at some point tomorrow. Music to the ears of many, especially those that favour the best form of defence is attack approach.

That is likely to signal the impressive South American attacking foursome of Rosales, Morales, Techera and Rivero that looked so good last week in beating RSL. That’s assuming that Rosales can go three starts in eight days, so that may be a gameday decision, but that aside, Robinson says that the team got through the midweek defeat with “one or two little bumps and bruises, nothing major”.

That Latino quartet is, in theory, certainly an attacking and potentially explosive attack, but trying that against a Galaxy side that has punished the visiting Whitecaps time and again a wise move? If they can take their chances, then Robinson firmly believes it’s the best way.

That’s if they can take their chances. They’ve not been doing that all that often this season, or last, and Robinson acknowledges that has been the key issue for his side this year and one he is still struggling to get to the bottom of. It’s cost them dear in a number of games this year, the latest of them on Wednesday night in Montreal.

“It wasn’t a disappointing loss, it was a tough loss, because I think we played very well in patches,” Robinson feels. “We didn’t take their chances and they did. That was the disappointing thing out of the game, but you’re going to lose games in this league, it’s how you get back, how you bounce back and we’ve got a game against the champs so we look forward to it.”

With so many chances being created game upon game though, surely it just has to be a matter of time before someone catches fire and puts them away? LA may not seem like the ideal opposition for that to happen, but Robinson feels it’s actually the very opposite, as his side showed a few weeks back.

“If we’re going to create as many chances as we are, there’s going to be a switch eventually that is turned on and we’ve got to take them,” Robinson added. “LA are one of the best footballing teams in the league but what they do allow, they do allow you to play and we saw that at BC Place. We’re going to go and try and play and see if we can get a result.”

The Whitecaps certainly did that against the Galaxy at the start of April, putting in a commanding performance as they dispatched LA 2-0 at home in the fifth game of the season. The ‘Caps made many around MLS sit up and take notice with that display. It sent them to the top of both the Western Conference and the Supporters’ Shield standings and it was perhaps the most complete Whitecaps game we’ve seen in a long, long time.

Since then, it’s been a different story. Ten games played and three wins, with only 11 points taken. That would send most teams spiralling down the table, but it hasn’t happened for the ‘Caps who still sit second in the West and third in the league.

As the chasing pack closes in, Vancouver have managed to keep their heads about water thanks to a serious of favourable results elsewhere. Great on the one hand, but it’s meant that the Western Conference has tightened up no end as a result.

Many of those teams have a game or two in hand on the ‘Caps and only six points separates second from ninth. Any team that can string together a multi game winning or losing streak will climb up the table very quickly or plummet the depths and out of the playoff places.

Facing their second game in what will be a gruelling five game toad stretch, the Whitecaps are desperate for it not to be the latter.

“Every team wants to win every game,” Robinson stated. “Unfortunately it doesn’t happen, whether you’re the champs, whether you’re the Supporters’ Shield winners or you’re a playoff team or a non playoff team. It’s just about being there or thereabouts and that’s where we need to be. So we’re there at the moment and we’ve got to try and stay there.”

The ‘Caps get a chance to rest after tonight, with a bye week next weekend and the players being given five days off to relax, regroup and get ready to go again for what will be an even busier summer than the last couple of months.

This road stretch could play a key role in shaping what remains of the Whitecaps season and they can’t afford all their good early work to be undone more than it has already.

“Whether we get the result of not [against LA], we’ve had a decent start to the season, whichever way you want to look at it,” Robinson said. “The break will probably come at the right time. I’m trying to be positive on this game because I want them to play with a lot more confidence.”

And they need to.

Winning breeds that, as does goals. There’s no better time for the ‘Caps to get that confidence flowing than tonight. If not, and another defeat is the end result, then that bye week suddenly gives everyone at the ‘Caps a lot of thinking to do.