It was going to happen sooner rather than later – a CPL team knocking out a MLS one – and with Vancouver Whitecaps’ history in the Canadian Championship, it was a good bet that it would happen to them. And so it came to be at BC Place on Wednesday night.

Cavalry FC headed west and were full value for their 2-1 victory, moving on to the semi-finals where they’ll play Montreal Impact. The Whitecaps are impotent once again, undone by a CPL side with a combined wage bill lower than Ali Adnan’s.

Jordan Brown had fired the visitors into an early 7th minute lead and it seldom got better for the ‘Caps after that. Inbeom Hwang tied things up midway through the second half to level the game on the night but keep Vancouver behind on the away goals rule, but none of that mattered when former WFC2 player Dominick Zator headed in what proved to be the final goal of the evening five minutes later.

Out crashed the Whitecaps for the lowest point of their MLS era. For now at least. There’s still time. Whitecaps fans were prepared for what lay ahead Although the ‘Caps defence didn’t seem to be, and a long ball forward caused problems And blast home the opening goal seven minutes in But the game was getting away from the Whitecaps, with an Erik Godoy miss in front of goal the best they had to show for it in a half with no shots on target But midway through the second half, some dogged work from Theo Bair saw the ball come to Inbeom Hwang and his shot was deflected past Marco Carducci in the Cavalry goal To powerfully head home a corner and restore Cavalry’s lead History was in the making Make more likely by Vancouver’s inability to convert their chances And when the referee blew for full time, Cavalry joy was complete Tommy Wheeldon Jr planning a new waistcoat with his bonus we’re sure. Well done to him and all the Cavalry lads. You deserved it. Now go do the same to Montreal 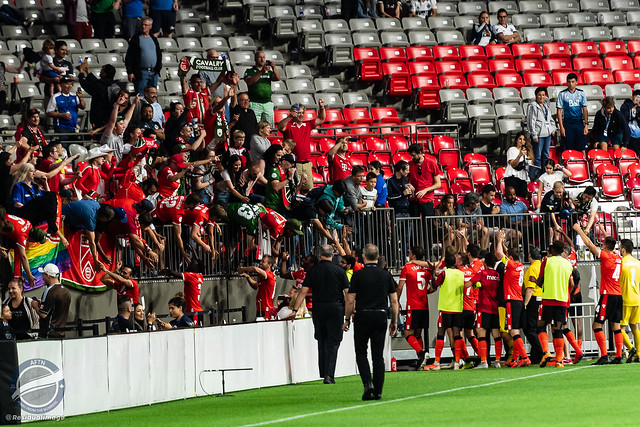