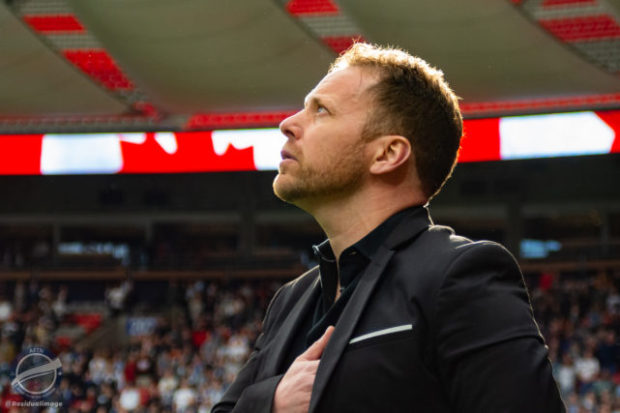 Jeff Mallett, Bobby Lenarduzzi, and Dos Santos himself talked about a new approach, a new identity. The desire to play attractive football at home, helped by the spending of the Davies transfer on the playing side of the business to bring in difference makers. A desire to integrate young, homegrown talent into the first team mix, far better than it had been done previously.

Ten months on and those statements have not really borne fruit.

The club has three Designated Players, but they’ve not exactly been difference makers and we’re seeing more indifference from some of them at this point. They’re also not the kind of DPs you see elsewhere around the league, both in terms of performance and stature.

I don’t think attractive football could really be used to describe the Whitecaps in any sense this season, unless you just love watching the goals fly in for either side, and the desired and much vaunted high press game was apparently either thrown out of the window very early or the instructions were simply ignored by the players.

Dos Santos talked after the Cavalry loss about the need for something “drastic” to take place to try and get the Whitecaps out of this rut and turn their fortunes around. What that may be looks like being the injection of some new blood into the squad this transfer window, possibly removing some tainted stuff in the process.

And a transfusion is badly needed. Players MDS has signed expecting to be A positive or at least B positive have sadly proved to be very much on the negative, leading to an overall generally negative vibe surrounding the club right now in every aspect of its operations it feels.

Dos Santos has used 22 of the 28 players at his disposal this season. Of the remaining six, one is the injured Jasser Khmiri, who may finally be able to take to the pitch in the coming month, and the other five are Whitecaps homegrown players – Michael Baldisimo, Simon Colyn, Thomas Hasal, Sean Melvin, and David Norman.

Baldisimo, Hasal, and Norman have all had injuries at various points of the season. Colyn has been away with various Canadian national teams and with the ‘Caps development squad, and Melvin is not going to get time when he has Crepeau and MacMath ahead of him. 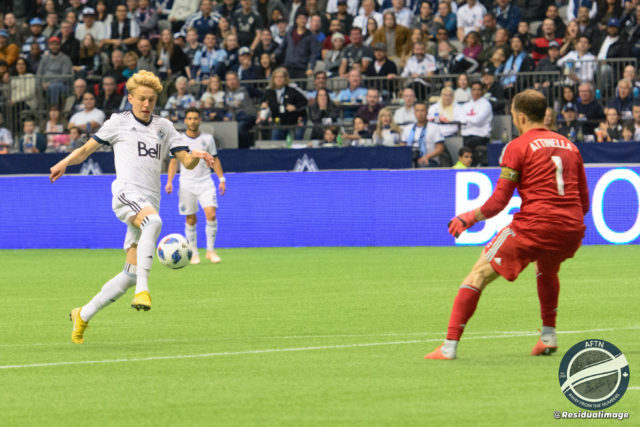 Right now they’re all fit. So, with the Whitecaps in complete turmoil and realistically with no hopes of any success this season, many, ourselves included, expected to see all of these homegrown talents get some minutes and first team experience over the remaining 11 MLS matches. They would, after all, be some of this fresh blood that the ‘Caps are badly needing and surely couldn’t do much worse than what we’ve had to endure over the past month.

But not so fast. The likelihood of seeing these players in MLS action this season remains slim and for Dos Santos, there’s very good reasons for that – they simply have not shown that they are ready for the next level.

“Simon Colyn, today, is not ready to get in,” Dos Santos told AFTN at training this week. “And Baldi has to show us more in training to get in. I just want to be fair. I want to make sure that the message is not because they’re Academy they have to play. No, it’s not true.

“Now if they deserve, they could go and talk with Theo [about] what did you do? How was your mentality to get a chance? Maybe Theo could explain a little bit to them. If they show some signs that I feel they deserve it, there’s big chances that we’ll see another young player playing.”

This will disappoint many, for whom this felt like one of the few plus points for watching the rest of the season, but the ball seems to firmly lie in the players’ court to show Dos Santos in training and in the Development squad games that they are ready for some first team action. The fact that they haven’t raises question of not only the players themselves, but of the whole Whitecaps development system right now, especially just what the current U23 side is doing to get these players ready for the next level.

Theo Bair has been the only recent homegrown signing to make the breakthrough, and even then, Dos Santos revealed it’s been a challenging season for the 19-year-old striker. One that seemed to be going awry, before Bair turned it around for himself through an attitude adjustment and hard work.

“He deserves it,” Dos Santos said again of Bair getting his opportunity now in the first team. “His personality, his work. I was so hard on him before. When he came back, he had a meeting with me at the beginning of the season saying ‘I want to play, I want to be an important part of this club’ and he wasn’t showing it in training.

“He wanted to be that in a way that was entitled. I got really upset with him that day, and I sent him to work with the Development Squad so he didn’t even train with us for I think a month. He was walking through this, going over there every day, and he didn’t say a word, but when we brought him back after the Korea trip his mentality was totally different. Hard working, listened to everything and every little minute you got from him was gold. So he put himself in that position to deserve it.” 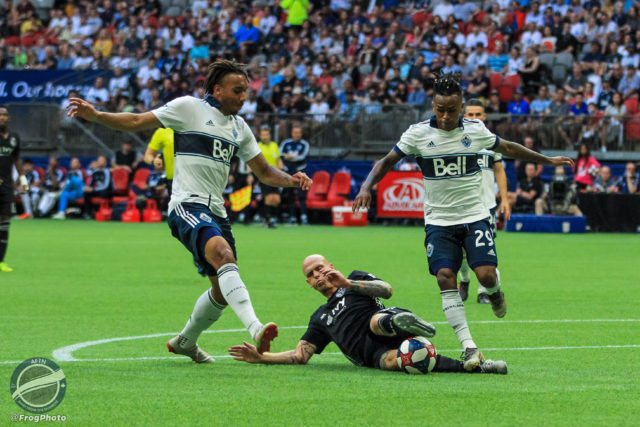 Of the rest, Colyn got a couple of minutes run out in the final match of last season, almost scoring on his debut and impressing. But that was a small sample size. Has he regressed since? Does the travelling roadshow that is the Whitecaps U23 development squad aid him or hamper him and the others?

Playing time is all well and good, but if you’re playing, and losing, to the VMSL All-Star side one week, how much does that really prepare you for playing a MLS side? It surely can’t. These players need far more testing environments. Whether that is in the USL League One set up or in the newly proposed BC League One that is set to launch in 2020 or 2021, with BC Soccer coveting the ‘Caps to be a part of, remains to be seen.

Next month the team has matches against UBC, SFU, and Khalsa Sporting Club. Can the likes of Colyn and Baldisimo really expect to impress Dos Santos in those? Probably not, so they need to be at their best at training. If they can be, they will have a shot, because as we said earlier, can it actually be any worse than what we’ve been watching play out?

Norman would appear to have the best shot of seeing some first team action any time soon. He impressed in his loan spell in Scotland with Queen of the South. They wanted to keep him longer but he wanted to come back and fight for his spot here, only to get injured on the development squads trip to the UK.

The fact that these homegrown signings are deemed to be a step off the mark in terms of being first team ready is alarming, especially when you see other young talent across MLS not only getting minutes and starts, but making huge contributions to their teams success.

If the Whitecaps development environment is not setting these players up for similar success then that sadly appears to be yet another part of the organization this is needing blown up and rebuilt.