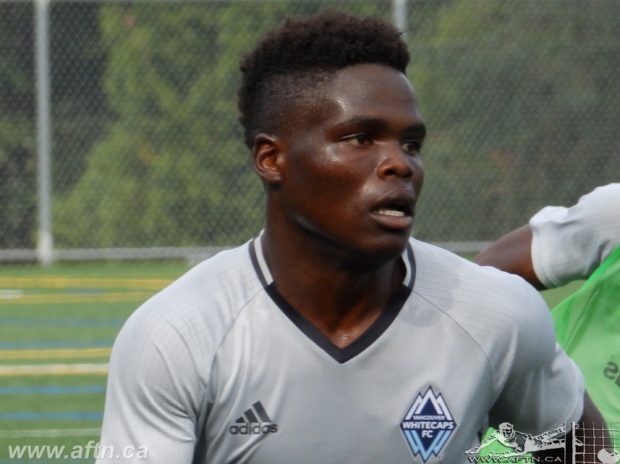 It was a somewhat different UBC Thunderbirds team last season to what we’ve been used to from Mike Mosher’s men in years past.

They may have clinched another Canada West Pacific division title, but a penalty shootout loss to eventual U Sports champions Alberta in the Canada West championship game, followed by a quarter-final loss after double overtime in the nationals made for a disappointing all round season for a Thunderbirds team with a record breaking 13 CIS Championships to their name.

The prime reason for their failings was pretty clear to see. UBC’s traditional stingy defence was still very evident. They only conceded 10 goals in their 16 regular season matches. The issues were at the other end of the pitch.

UBC hit just 26 goals on their way to the Pacific division title. To put that in some context, Alberta hit 41 in winning the Prairie division and Calgary hit 45 finishing second. It was a far cry from the 45 the Thunderbirds had scored in 2012 and the 47 they put away the following year, seasons which saw UBC lift the national title.

Titouan Chopin led the way on nine goals, Kerman Pannu had six, and Zach Verhoven five as UBC averaged just 1.64 goals per game. It just wasn’t good enough and it was the number one priority for Mosher to address this offseason.

“Every team, every year is made a little bit differently,” Mosher told AFTN. “We were fortunate for years where we had some terrific attacking players who could score goals. Navid [Mashinchi], Gagan Dosanjh, Milad Mehrabi, Reynold Stewart, and so on.

“Then we went through a team last year where we weren’t as lethal, so that was the goal this year, to bring in some players that we think can score.”

Pannu and Verhoven are back, and the additions of Kristian Yli-Hietenan and Patrick Izett have already seem some results, but by far and away the key piece of Mosher’s offensive revamp is striker Victory Shumbusho. 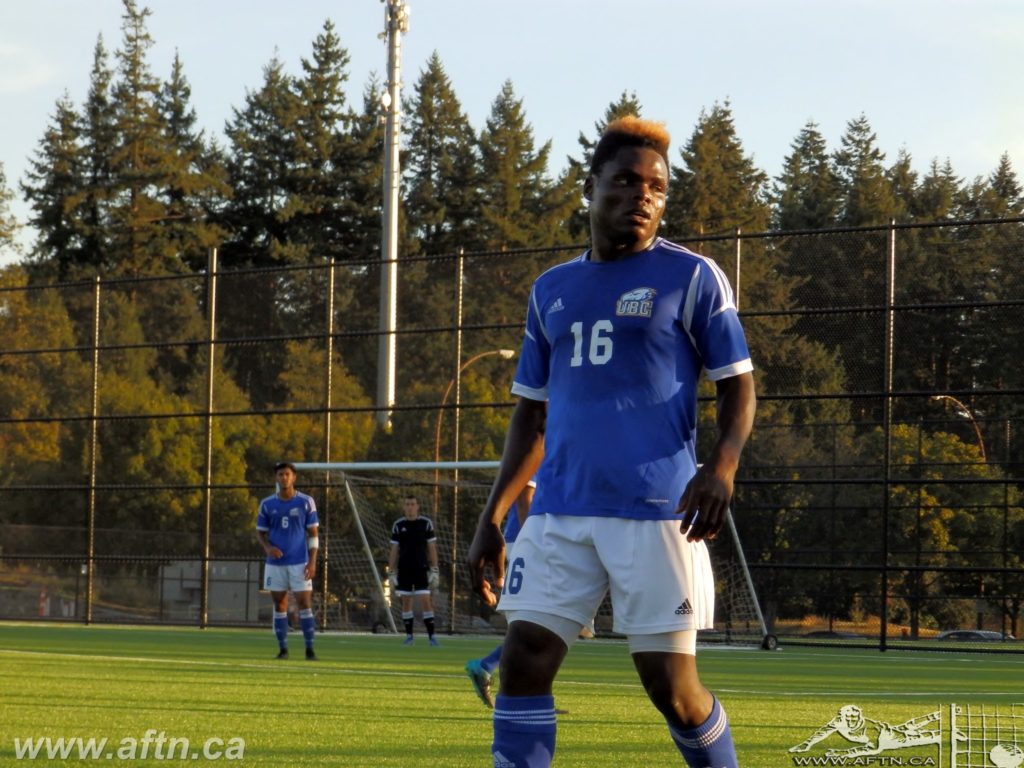 Shumbusho spent last season with Vancouver Whitecaps Residency, scoring four goals in 16 appearances before an injury took away most of his season. The Chilliwack native knows what is being expected of him in his first year in the college ranks, but is just taking it all in his stride.

With two goals, including the match winner on his debut, and some strong performances already in UBC’s first five matches, the expectations put upon him already seem to be reaping their rewards. If that’s a lot of pressure going on the shoulders of a rookie 19-year-old, Shumbusho is just getting on with the job at hand.

“Yes, I definitely did feel some pressure [going into his first game], but mostly I just kind of tried to ignore it,” Shumbusho told us. “Just focus on my preseason and preparing and try to blend in with the team, getting to know the players and everyone.”

Shumbusho moved to the Whitecaps from the Chilliwack attack, playing for the Residency in his gap year. It was Mosher who recommended him to the ‘Caps, the second time he has been put on the Residency’s radar, and that faith the Thunderbirds coach showed in him has been rewarded by loyalty.

Despite being courted by a number of different universities, there was only ever going to be one choice for Shumbusho and that was to play under Mosher.

“It’s loyalty to Mike,” Shumbusho said. “Mike, sees the potential in me and he recommended me to the Whitecaps, and I made it to the Residency from his recommendation. From the first time he saw me, he believed in me as a player and as a person and he wanted to help me out.

“He looked for my best interests as a person and as a player, so when it came to the choice to choose [which college to go to], I was obviously going to choose him. He’s the right person for me to play under. Someone who believes in me.”

Shumbusho’s time in the Residency program may have been brief, but he feels he learned a lot there to hone his game and prepare him for this next level.

“I think I learned a lot, as a player especially,” Shumbusho told us. “It was different because you’re playing with a bunch of players with the same ambition as you. I definitely learned a lot but my injury set me back a little bit. I got injured for four months there, but when I came back I thought I’d picked myself up and pushed forward.”

That year with the Residency has certainly prepared him for the college game, and although there’s definitely some differences with regards to the age of the players he’s now mixing it up with, he doesn’t see it as that big a jump in levels of play.

“I would say with regards to the Residency, it’s not that much different,” Shumbusho said of the play in his UBC games so far. “It’s very physical, it’s very fast, but here you’re playing with some men, so it’s definitely a little bit different from youth because if you’re playing with men, you’re going to be playing physical, and it is a more physical game.” 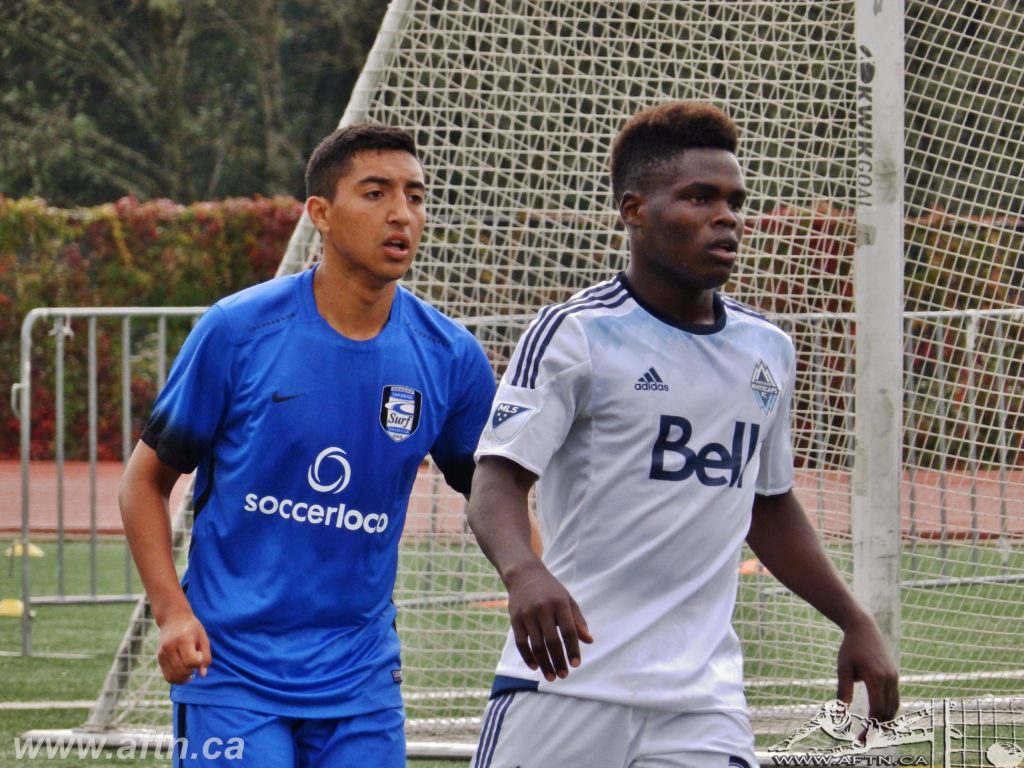 Shumbusho’s journey to both the Thunderbirds and the Whitecaps is one of those great footballing stories. It would be easy to compare it to the likes of Alphonso Davies and Gloire Amanda, even Kekuta Manneh, for there are definite similarities, but each player’s struggles and hardship are a remarkable tale of their own.

Born in Congo, the civil war that ravaged the country saw his family displaced to neighbouring Uganda when Shumbusho was nine-years-old. They were awarded refugee status, eventually settling in the village of Bwerenga.

Life wasn’t easy, it was an hour plus walk to school for Victory and his brothers, but they were safe and away from a war zone, and it was in Bwerenga where Shumbusho really discovered his passion and talent for football.

“In the Congo we just played soccer, not really caring much about it,” Shumbusho revealed. “It wasn’t until when I moved to Uganda that kids took soccer seriously, so I started taking soccer serious. I really loved the sport and since then I wanted to do something with it.”

And he got that chance here in Canada.

Victory and his family applied for refugee status in Canada, looking to start a new life. Shumbusho’s father was a minister in Uganda, and their application was sponsored by a church in Chilliwack. The rest is history.

It hasn’t all been plain sailing. Coming to a new country was obviously a bit of a culture shock, not to mention the weather difference, and although Victory and his brothers Glory and Benjamin quickly settled in, it took his father and his stepmother a little bit longer.

“It was an easy transition for me and my two brothers, but it was definitely a hard transition for my parents,” Shumbusho admits. “As a new culture, working, getting around and stuff. Everything was new to them. For us, we had friends and they made us get used to everything real quick, quicker than our parents, so it was definitely harder for our parents than it was for us.”

As he starts his first year at college, there’s more adjustments for Victory to make but he’s already feeling at home at UBC. both on and off the pitch.

He co-leads the Thunderbirds with two goals in five starts, and sits second on the team with seven shots, five of them on target. He’s still finding his feet and you know there’s a lot more still to come.

“I would describe my game as pace,” Shumbusho told us. “I try to run a lot. High workrate and finishing in front of goal if any chances arise. I’m a very hard worker. I like to consider myself like that because that’s how I’ve been playing since I was little.”

Shumbusho and his UBC teammates return home for a double header of matches at Thunderbirds Stadium this weekend. First up are the Calgary Dino’s on Friday night, with MacEwan Griffins next up on Saturday. Both matches kick off at 7.30pm and admission is $10.

As broadcast partners to both the men and women’s UBC soccer teams this season, AFTN will have the call on Canada West TV if you can’t make it along to the matches.