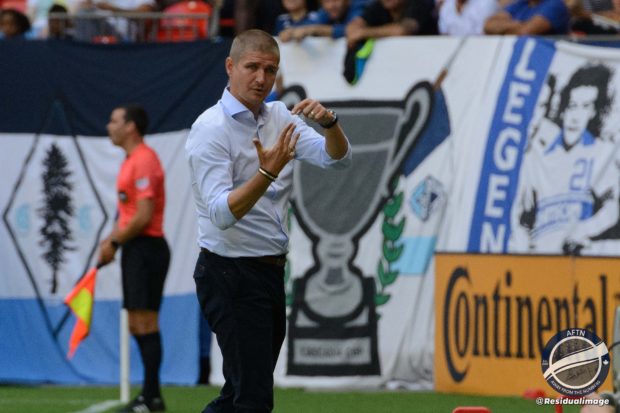 The 2017 season is now officially over. I write this on the eve of Sunday’s trade window and what may be a Kei Kamara announcement to follow. Meh!

There already looks to be a lot of rebuilding ahead for Carl Robinson and the Vancouver Whitecaps. Options haven’t been taken on long established players, new additions are clearly coming, and after falling short at the conference semi-final stage for the second time in three seasons, the ‘Caps have some serious thinking to do if they are to move to that next level.

Here are some of the big directions one might consider for the Whitecaps.

Never mind that the whole notion of ownership is still bizarre to this German transplant. Sounds like Dead Bulls to me. But, I accept that that is how MLS is structured. At this point, however, the more-or-less faceless Whitecaps owners have made it pretty clear that free-spending is not the model they are pursuing for their property and I think that’s fair. So, let’s stop demanding that ageing “big signing” on a team of an otherwise unchanged Whitecaps model and realize that Toronto FC we are not. Sure, to build a soccer dynasty, it takes deep and rapidly emptying and refilling pockets, but that’s not us, so enough of that demand already.

Really? So, Kei Kamara by himself is going to somehow shoot us to a MLS final? Nothing against him, but I doubt it! To me “a proven MLS [striker, midfielder…]” signals giving up and recognizing that we are not able to be creative and innovative to find our own way.

No, I don’t enjoy counter-attacking football and yes, the “series” against the Sounders was awful to watch. But I am not enough of an expert to know whether Robbo could have played differently with this cast of players or whether he assembled the team for a particular kind of football. I do recognize that the players seem to follow his tactical direction, even when they must have been enjoying some of the matches this past season. But, let’s stick with Robbo, it’s not like there is a clearly better choice waiting out there.

Robbo, come on, be a bit more daring! Recognizing that the big stars aren’t coming to you, choose innovation! You’ve demonstrated that you can play very traditional, unimaginative football, even with some success, but where does that lead the Whitecaps or your career? There is a lot going on in other leagues that is worth watching. In so many European leagues a small number of teams are now dominating leagues, partly because of the money-spinning Champions League. Other teams have to be innovative. That’s us!

I happen to primarily follow the Bundesliga, where we’ve seen a number of attempts to overcome Bayern’s dominance by adopting new styles of playing. Full-court presses have been all the rage for a couple of years now, see teams like Leverkusen (last year), Dead Bulls Leipzig, or the early-Wosz Dortmund. No, not always successful, but they were not going to be successful against Bayern anyway. Or, Tedesco’s “pentagon” formation at Schalke that has some tactics observers all excited. What about Nagelsmann’s technology innovations at Hoffenheim? I’m not looking for Robbo to copy these approaches (though perhaps some would be worth considering), instead let’s try something different.

Annoyed by artificial turf and crazy travel times? Are we so dull that we can’t imagine any way to turn that into an advantage? Yes, the ball rolls/bounces differently on turf. What style of play, what kind of player, is well-suited to turf then? We should be dominating teams that are used to grass, and most of our players have played on lots of grass, so they can.

Away games three time zones away and no charter jet? Isn’t there a coaching app for that? Can’t we imagine inventing squad rotation systems that are Canadian-made and turn our situation into an asset rather than a topic of endless complaints when the East Coast is unlikely to slip into the Atlantic to leave us playing only in Cascadia?

Yes, Octavio didn’t work out. But recall how we felt after his first 10 games. If things had continued like that, THAT would have been something to get excited about. The heretofore unknown Uruguayan makes his breakthrough and shoots ‘Caps into semi-final? Yes, please!

With a bit of luck and some more examples of players like Miguel Almirón, that strategy might even be economically viable and perhaps more promising than a USL-less Residency.

And yes, only every fifth Kendall Waston is going to work out, and only every 20th Almirón, but I am sure looking forward to watching the Whitecaps in those seasons, interspersed with seasons that have the European analysis nerds showing up at BC Place to figure out what weird formation Robbo has invented.

Dear fellow fans, quit your complaining and harping on a small number of topics and join in supporting the innovative Whitecaps!

There are numerous directions the Whitecaps front office face right now for taking the team to the next level, the next era of Major League Soccer. Which will they choose? Which would you choose? Let us know.