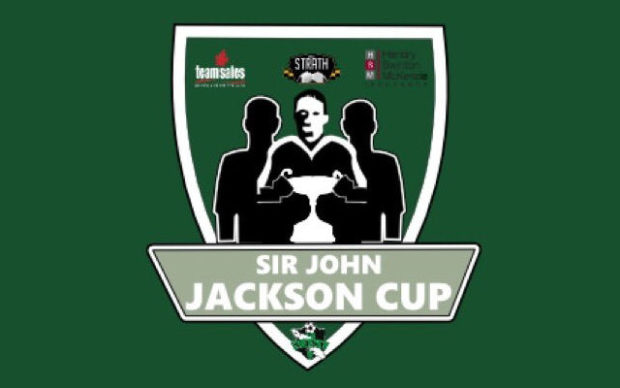 The Sir John Jackson Cup lived up to expectations this past weekend, providing several great games on the island, with a couple of expected results, a couple of upsets, and recently crowned Division 1 fourpeat champions, Cowichan FC, surviving a massive scare before living to fight another day.

Here’s is how it all played out.

* In what VISL President Vince Greco believes may have been the best games of the year to this point, Nanaimo defeated Westcastle 1-0 at Westhills Stadium in Langford on Sunday evening, in one of three all Division 1 first round clashes. An end to end game, with some big saves, was finally settled eight minutes from time with a diving header from Daragh Fitzgerald to send the defending champs through.

There goes the whistle. FT. @nanaimoutdfc defeat Westcastle 1-0 in #VISL #JacksonCup 1st round action. That was a gem of a game to take in. Bravo to both teams !!!!!

* After an epic all Division 1 battle at Sherman Road on Friday night, VI Wave were just two minutes away from producing a huge upset over Cowichan, but it was to no avail. The Wave led 1-0 at the half and their defence held on resolutely before Keevan Webb tied things up for Cowichan just before the end of normal time. With the game heading for an extra 30, Patrick Nelson’s goal right on the stroke of half time of extra time was enough to send the Division 1 champs into the last eight.

* Division 1 side Gorge comfortably dispatched a struggling Vic West Division 2 squad 5-0. Goals from Dominic Colantonio and Max Legg had Gorge two up by half time, before a Jon Shah brace, the second of which was a penalty, and a second goal from Colantonio rounded off the rout.

* In what some may have considered an upset, Fernwood Town ET Soccer defeated Juan de Fuca 2-1 in an all Division 2 clash.

* Comox Valley came down the island and defeated fellow Division 1 side Bays United 4-2 after extra time. Comox had looked home and dry in the 90 minutes before two late goals from the home side forced another 30 minutes.

* Their Division 2 side may have struggled but Vic West’s D1 team had no problem handling Division 2’s Nanaimo, handing out a 5-0 hammering of their own at the University of Victoria.

* In the Lakehill derby between their Division 1 and Division 2 teams, the first division outfit came away with a 2-0 victory on Sunday on the Braefoot Turf. The match was scoreless at the half before the higher division side scored twice, holding on for the clean sheet, despite being down to ten men by the end after goalscorer Dan Citra was sent off.

* In an all Division 2 clash, Mid-Isle Highlanders beat Saanich Fusion 2-0 to claim a spot in the last eight.

Matches are set to take place in two weeks’ time, between March 2nd and 4th.

You can find all the VISL league and cup results, fixtures, and standings across all the divisions on visl.org.