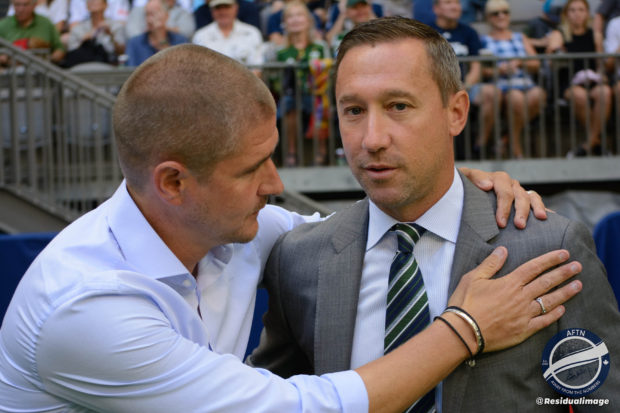 It all comes down to this (kind of).

It’s been a funny old season, and the dumpster fire that is the MLS Western Conference will finally be extinguished starting on Sunday at 1 pm. Despite this being a battle between the top two teams for first place, this game may not be where the centre of attention will lie for most viewers, with three teams fighting it out over the last remaining playoff spot; two of San Jose, Real Salt Lake, or FC Dallas will not be playing another match this season.

This game does have significant influence on how the postseason will look for the Cascadia teams. Vancouver need to avoid defeat to clinch the top spot in the Conference and a first round bye. A draw would see the Caps remain top even if Seattle Sounders win, as the tie breaker if they both reach 53 points would be the amount of wins, putting the ‘Caps out of the Sounders reach, having two more as it stands. A defeat could see the Caps drop to 2nd or 3rd, with the latter placing the Whitecaps in an extra midweek knockout round match against the 6th place team (likely to be San Jose). Basically, the ‘Caps need to not lose to get a bye to the conference semi-finals and some extra rest.

All that math and probability aside, getting a result in Portland is no small ask. While the Timbers have been misfiring like the rest of the West, Diego Valeri is having another unreal season. He has become only the second ever play to reach 20 goals and 10 assists in one regular season. He creates, he finishes, and he closes down. While Diego Chara and Darlington Nagbe will also be drifting around that midfield, which will be where this game is won and lost. Alvas Powell had a great game last week, so expect Robbo to make provisions for that on the Whitecaps left hand side also.

I do not like the idea of playing for a draw, but I think that is what Carl Robinson will go for. He will hope for a game similar to the 1-0 win against Kansas City, and not the 3-0 thumping against Seattle and NYRB. It’s risky, but as we have seen the style of this team evolve into a purely counter attacking one, it is a risk we must live with. The stall could be set out to grab an early goal and then sit back and force Portland to attack. A move which could really go either way with this defence.

What worries me is not the quality of our defenders, but rather the tendency for certain players to lose concentration. Much like right back was a position of weakness last year, left back is, to a degree, a position of the same uncertainty this year.

Jordan Harvey, who is an unquestionable club legend, is past his best years, and while Marcel De Jong has raised his game in the second half of this season, he does not appear to be a long term solution. However, for the remainder of this season, we will have to work with what we have. As mentioned on the AFTN Soccer Show, a wise tactical decision to shore up the left hand side could be to essentially play two fullbacks in the left back and left wing positions in both Jordan Harvey and Marcel De Jong.

The rest of the backline picks itself: Nerwinski, Parker and Waston have had a great season, and any success we have will be dependent on them.

In the midfield, Aly Ghazal will play a massive role in containing and controlling the centre of the park, which we know in Portland is a key part of the game. Tony Tchani will need to be at his energetic best. Tchani has been a solid acquisition for this club, but at times his intensity is a bit lacking. It’s at times like this you wish Nosa Igiebor was up to match fitness and could be thrown in to the mix.

I hope that De Jong starts in the left midfielder role in the 4-2-3-1, with Yordy Reyna and Cristian Techera completing the midfield. Fredy Montero has a good record in Portland, and will as always be the focal point of both the Whitecaps attack and closing down.

Finally, before I send you on your way, I would like to take the opportunity to talk a little bit about what is happening to Columbus Crew right now. As has been widely reported, the owner of the club is planning to move the franchise to Austin for the 2019 season. There has been uproar in the MLS supporters community, and various supporters groups have shown solidarity with the Crew fans. These last few days have put a lot into perspective; showing how much a football team means to a community, and how the structures in place at this league do not necessarily protect the fans in that way. It is a sobering time to be a fan, but a united front seems to have taken shape, and I stand with this movement that is voicing its anger at those who are allowing this to happen. I urge anyone who would like to get involved to do so at this crucial time. I would like to suggest a league-wide supporter protest at the 21st minute of each match (as Columbus Crew have played in the MLS in Columbus for 21 years).