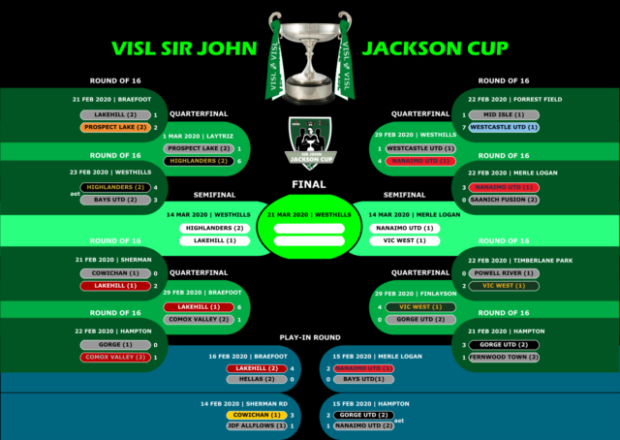 The Vancouver Island Soccer League (VISL) Jackson Cup semi-finals are all set after a weekend of quarter-final action that saw a couple of blowouts, a shutout, and a stunning knockout.

Saturdays first game saw a Champions v Champions battle as Division 1 side Lakehill took on Comox Valley United and ran away 6-1 winners. Jon Shah and Wesley Barrett both hit a brace for Lakehill, with Blair Sturrock and Nicholas Pineda-Graham also getting on the scoresheet for the home side. Spoiling the shutout bid in the 90th minute, and getting the loan goal for Comox, was Josh Fauchon.

Saturday also saw Division 1 side Vic West blank Gorge Utd of Division 2 by the score of 4-0. Brodie Keefe hit a double with Derek deGroot and Salem Almardy also on target for Vic West.

The last game of Saturday night took place at Westhills and was an exciting affair as Nanaimo United headed south to take on the only undefeated squad in Division 1 – Westcastle United.

Nanaimo, who are near the bottom of the Division 1, defeated the young squad 4-1 thanks to a brace from Colin Jacques and goals from Griffin Douglas and Shun Takano. Adding the single for Westcastle was Stuart Klenner.

Mahdi Hammoud put in a five star performance, hitting five goals for the Highlanders, with Goran Blagojevic adding the other. The loan goal scorer for the short staffed Prospect Lake team was Adrian Herlaar.

While it wasn't the ending they had hoped for, congratulations to Westcastle United on another solid year in the @VISLinfo.

Meanwhile, the Highlanders Second Team advanced to the Jackson Cup Semi-Finals with a 6-1 win (Hammoud with 5G) over Prospect Lake!#RootedInVictoria pic.twitter.com/5wJNzERGAt

The semis both go next Saturday, March 14th.

Nanaimo host Vic West in the first semi at the Merle Logan Turf, with a 3pm kick off. The second semi kicks off at 8pm at Westhills Stadium, as the Highlanders host Lakehill. Neither of those two have lifted the Jackson Cup before, so there’s some extra incentive in that one.

Both should be exciting encounters, so get out and support some local soccer if you can. Or both if you really feel in the mood!

The final is set for Westhills Stadium on Saturday March 21st.

Remember you can get all the latest VISL news, results, fixtures, and standings all season long at VISL.org.