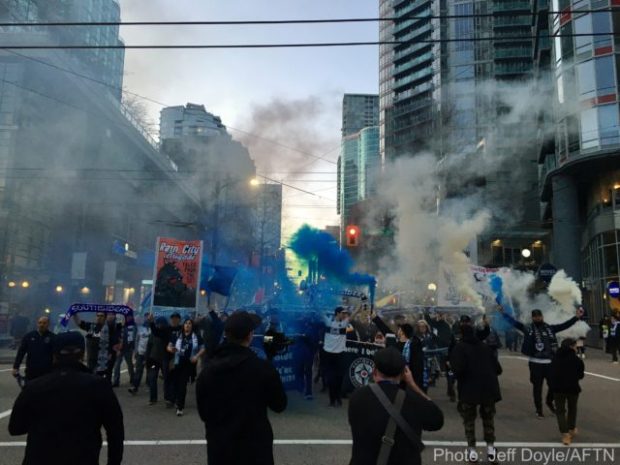 I’ve seen them. I’ve heard them. But I’ve never joined them. Until now. My first march with the supporters groups to the home opening game of the Whitecaps’ 2020 MLS season happened this past weekend and I wanted to share some of my thoughts and feelings with you.

I saw the notice on Twitter, the Southsiders were meeting at the Dublin Calling Pub on Granville Street before the game and they wanted Whitecaps fans to join them for a First Kick march from the pub to BC Place.

I have always enjoyed watching supporters march to their respective teams’ stadiums. Something about the camaraderie and tribalism, the singing and chanting, has always moved me deep inside. It doesn’t matter if I see it live or catch some footage online of fans making their way to their team’s grounds, I always pause and take it in.

So I thought, this time it’s my turn. I’m going to get in there and wear the jersey and sing the songs and cheer for my hometown team. So I put it in my calendar. 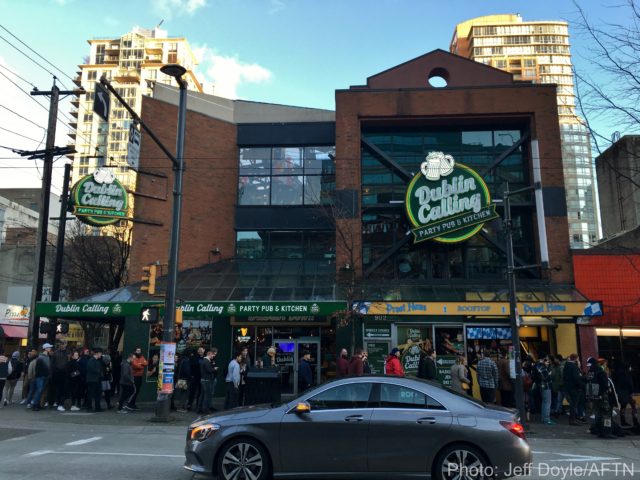 A couple of days before the match there was announcement by Whitecaps CEO Mark Pannes that things were going to be different this year in the way the players arrived at the stadium. In years past the players would find their own way to the stadium and slowly trickle in one or two at a time wearing their street clothes.

I remember seeing the photos on social media of the players arriving with captions like “Who has the best style?”. Not really the mindset you’re looking to have right before a match. So I was excited to hear about the new pre-game ritual Mark was putting in place for home games.

The players would all meet up in the morning of the game and go to a hotel together where they would have a pre-game meal, have a pre-game meeting and then jump on a team bus and arrive at the stadium as one team with everyone wearing their team track suits.

Mark was asking the Whitecaps supporters faithful to arrive at the stadium before the bus got there so that when it arrived, and the players got off, they would see their loyal fans cheering them on. Now that was something I had to see!

The Southsiders sent out a Tweet asking everyone to be ready to leave the Dublin Calling at 5:45pm sharp so that they and the other supporters could march to the stadium and arrive just as the team bus pulled up to Terry Fox plaza around 6pm. My thought was, “Oh boy, this is going to be epic”! Pre-game beers, singing and marching to the stadium, getting there to show the lads support and pump them up prior to the game. Count me in! 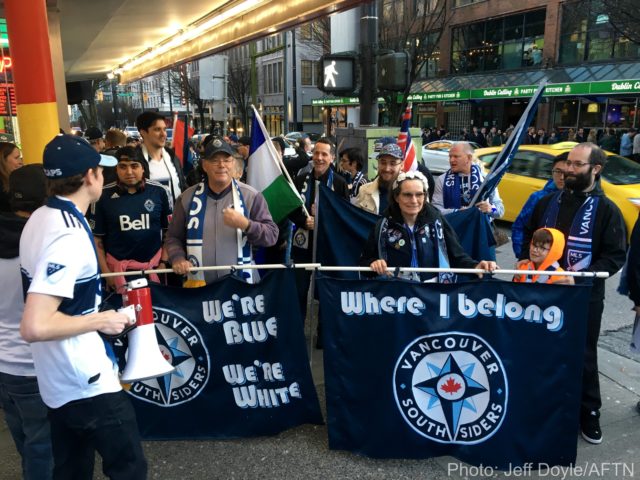 I ended up getting to Dublin Calling around 5:30. Some of the Whitecaps supporters were already pouring out of the pub and gathering on the corner of Granville and Smithe. Swag was everywhere. People were smiling and happy. Curious onlookers observed and took pictures. Everything was building up. And then, Carl Valentine was suddenly standing there. 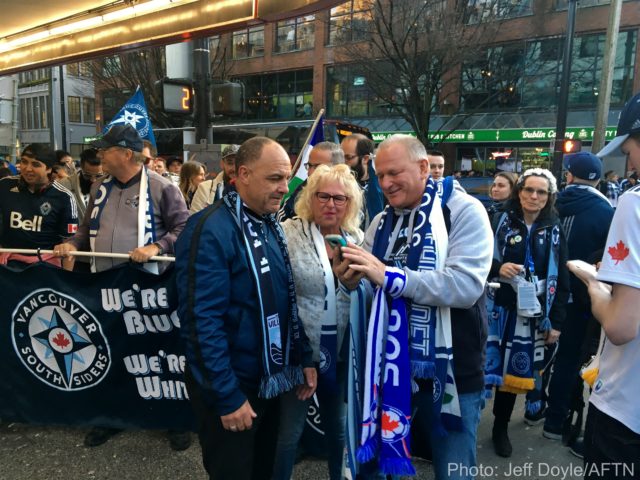 Memories from my youth of the Vancouver 86ers and Swangard Stadium came flooding back to me. What an amazing feeling. Carl was getting the crowd pumped up. Lots of people were taking selfies with him. The crowd continued to build. This was going to be amazing!

And then the march began. 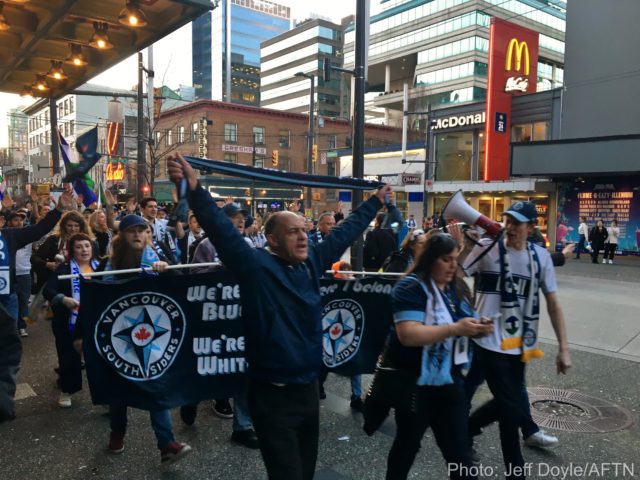 First it headed north on Granville Street. Songs were being sung. Flags were being waved. Scarves were being held proudly overhead. I was part of it. I was in the march. It felt amazing. Seeing all the Vancouver Whitecaps swag and seeing all the onlookers stop to take videos and photos made me feel really proud of my city.

We were proud Vancouverites and Whitecaps fans who were representing our city and our team. Take those photos onlookers. Share them with your social media network. Let the world know that Vancouver is arriving as a soccer city and the Whitecaps are arriving as a big ticket draw. 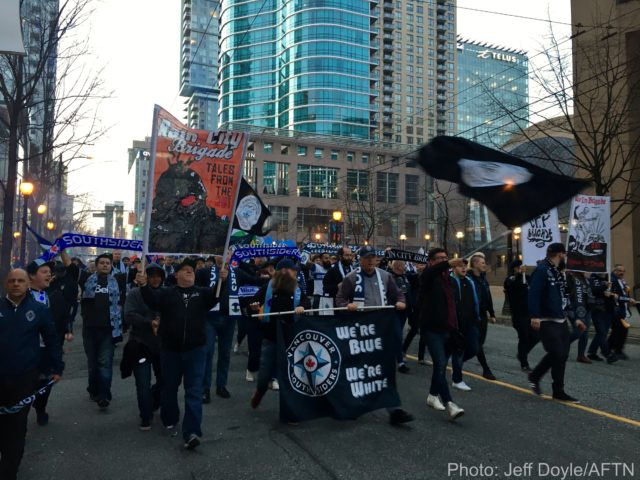 Then we turned right onto Robson Street. The whole street was blocked off for us and as we descended down the hill we could see the lights of BC Place off in the distance. The sun was setting behind us as we marched toward our shining grounds. It was amazing.

No photo could have done this scene justice. More onlookers were lined up on either side of the street taking photos and smiling as we marched by. The supporters sang their lungs out. They waved their flags and held up their scarves. Again, a sense of pride flowed over me. What an amazing thing I was a part of here. 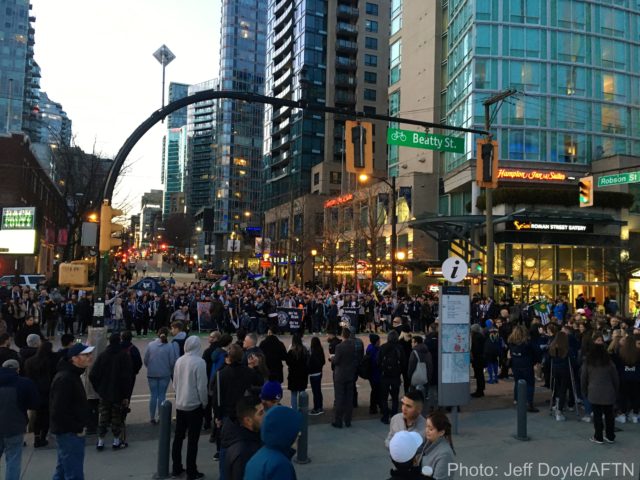 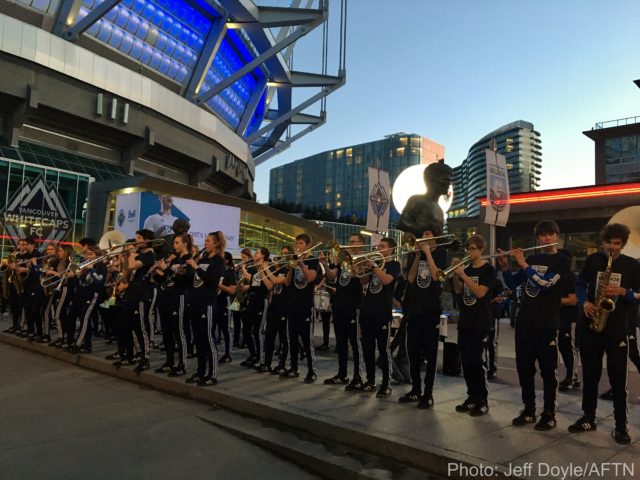 Then as we approached the stadium we could see a whole other group of fans gathered outside in Terry Fox Plaza. There was a marching band. There was a big sign lit up that said “VWFC”. As the marching supporters approached the plaza they began yelling “White!” and the fans in the plaza yelled back in reply “Caps!”. “White!” “Caps!” It was so neat to watch that happen between the two groups located on either side of Beatty Street.

We were all waiting with anticipation for 6pm when the team bus was scheduled to arrive. The mood was electric. Hope. Optimism. It was beautiful. And then 6pm came and went but the bus was nowhere to be seen. But credit to everyone there, they did their best to keep the good vibe going.

When the bus finally arrived on the scene after being stuck in traffic the supporters ran down to it to help guide it to the front of the stadium.

When the doors opened and the players began stepping off the bus, the energy level increased drastically. I was trying to get some photos of the players but the crowd was so packed around the bus that I couldn’t get close.

People were everywhere jockeying for position to get a chance to see their Whitecaps team. Just the way you want that scene to play out when planning such a new initiative. A certain level of pandemonium is a good thing if you ask me. 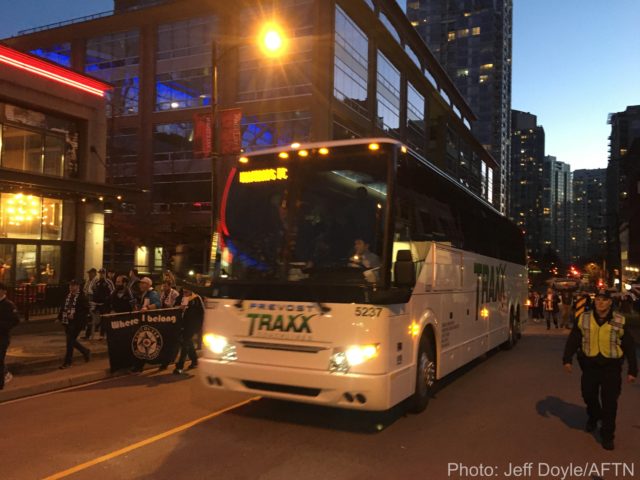 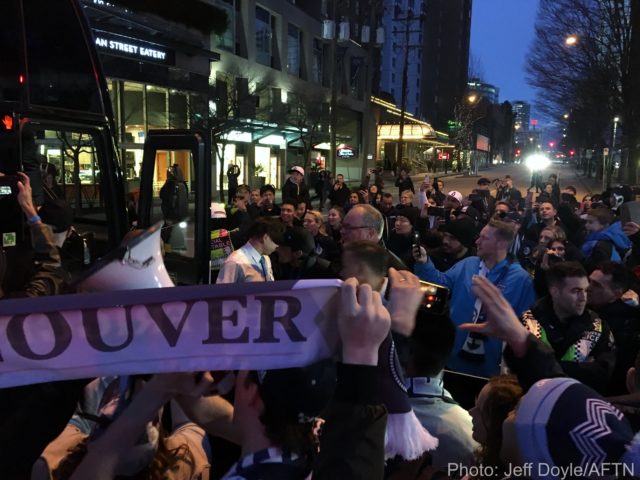 The players headed in and I was hooked.

I’m definitely going to march to every home game if my schedule allows. The feeling of that evening has stuck with me for the last few days. I smile when I think of it. I know the Whitecaps didn’t win their home opener, and that’s a bummer, but nothing can take that experience of marching with my fellow Vancouverites and fellow fans to the stadium on that beautiful night away from me.

I want to help influence others in this city to take part in the Whitecaps and the culture surrounding the team. I also want to learn all the chants. Practice time. Why don’t you come out and march at the next home game? You are more than welcome!