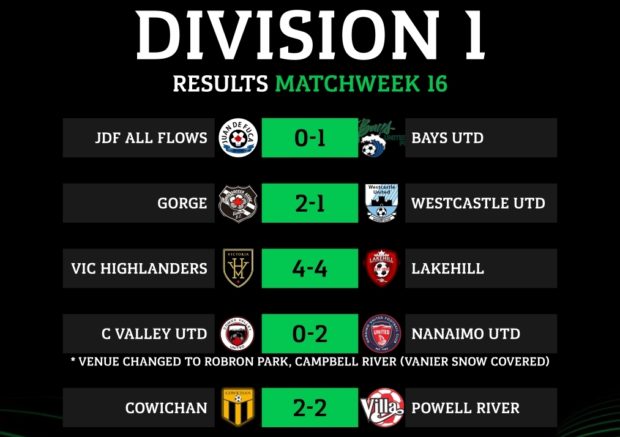 2022 has started out with a bang to say the least, with several interesting results from the first weekend of action in the Island’s top flight of amateur soccer – Vancouver Island Soccer League (VISL) Division 1.

Friday night started out with a close one at Royal Bay Secondary School as Bays Utd slipped by Juan de Fuca Allflows by score of 1-0. The loan goal of the game was scored by Bays striker Patrick Nelson and earning the shutout for Bays, their third in four games, was keeper Harjot Nijjar.

Friday also saw a short staffed Gorge team defeat Westcastle 2-1. Westcastle opened the scoring in the first minute of the game through Callum Colgate, but Gorge replied with goals by Kaelan Cook and the winner from Mike Dunham.

Saturday featured a game at Goudy Turf where the Victoria Highlanders and Lakehill went on a goal scoring tirade in an eight goal thriller that finished 4-4. The Highlanders were 2-0 up early thanks to a goal two minutes in from Matthew Plaath and a Lakehill goal four minutes later. The league leaders pulled one back two minutes before half time through Thomas Mallette before the action went wild in the second half.

Lachlan Will restored the Highlanders two goal lead in the 54th minute before Craig Gorman reduced the deficit again 10 minutes later. Plaath hit his second of the match from the spot in the 70th minute to put the Highlanders 4-2 up, but Blair Sturrock replied immediately to put Lakehill to within one once again, and Jon Shah completed the comeback, and the scoring on the night, with a 75th minute equaliser.

Saturday also had a game north Island with Nanaimo United defeating Comox 2-0 thanks to goals from Shun Takano and Daragh Fitzgerald. Securing the clean sheet for Nanaimo was Allstar Keeper Geoff Hackett.

The division wrapped up Sunday with Cowichan FC and Powell River Villa battling to a 2-2 draw. Blaze Roberts and Dan Citra were on target for Cowichan, with Villa’s goals by Niko Cristante and Marcus Cramb.

So after all of that action, here’s how the VISL Division 1 standings are looking: 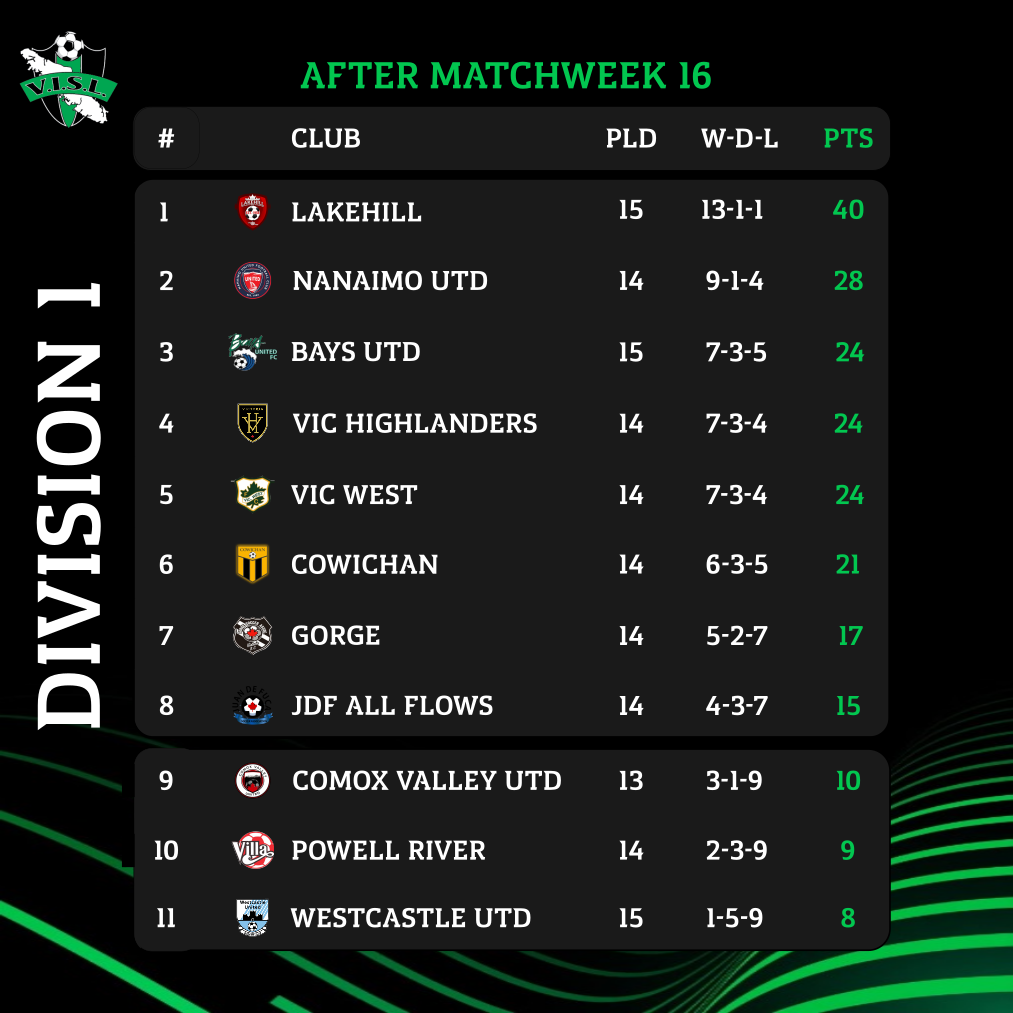 Lakehill still lead the division and are a step closer to capturing their second straight Garrison Cup. Their magic number is now six. Nanaimo has the only real chance of catching the leaders, and are resting comfortably in 2nd. There is a three way tie for the next three teams as Bays, Highlanders, and Vic West are all even and that will get interesting in the weeks to follow.

Cowichan, Gorge, and JDF are battling and will take points off teams in the coming weeks. Their destiny is virtually cemented and they should be safe barring any miracle runs from the bottom three in the relegation zone, who are Comox, Powell River, and Westcastle at the very bottom. Those teams will be putting their best foot forward for the rest of the season.

There were a couple more shutouts on the weekend, so a couple of keepers are gaining ground on Golden Gloves leader Hardeep Gahunia of Lakehill, who sits atop those standings with five.

The Golden Boot leaderboard is heating up again, and it appears to be a four man race. Seasoned veteran Blair Sturrock is still leading the way, but the race is far from over. Here’s how that is currently shaping up: 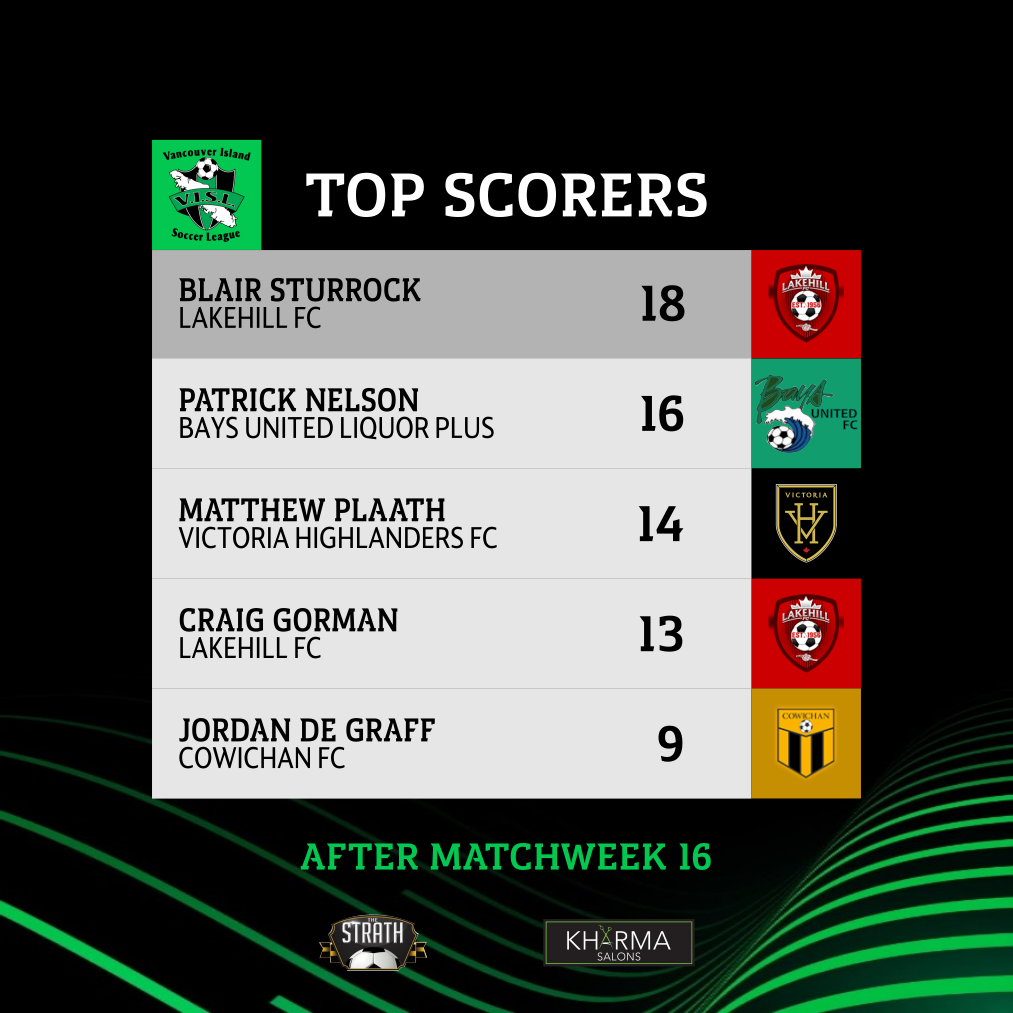 Just a super exciting weekend of amateur soccer this past weekend. Discussion at places of employment, coffee shops, and schools will be a little more heated to say the least. Between Cup play being around the corner, and divisional races to sort out – the temperature has definitely risen.

We’re already looking forward to what next week will bring. Here’s the full slate of Division 1 matches: 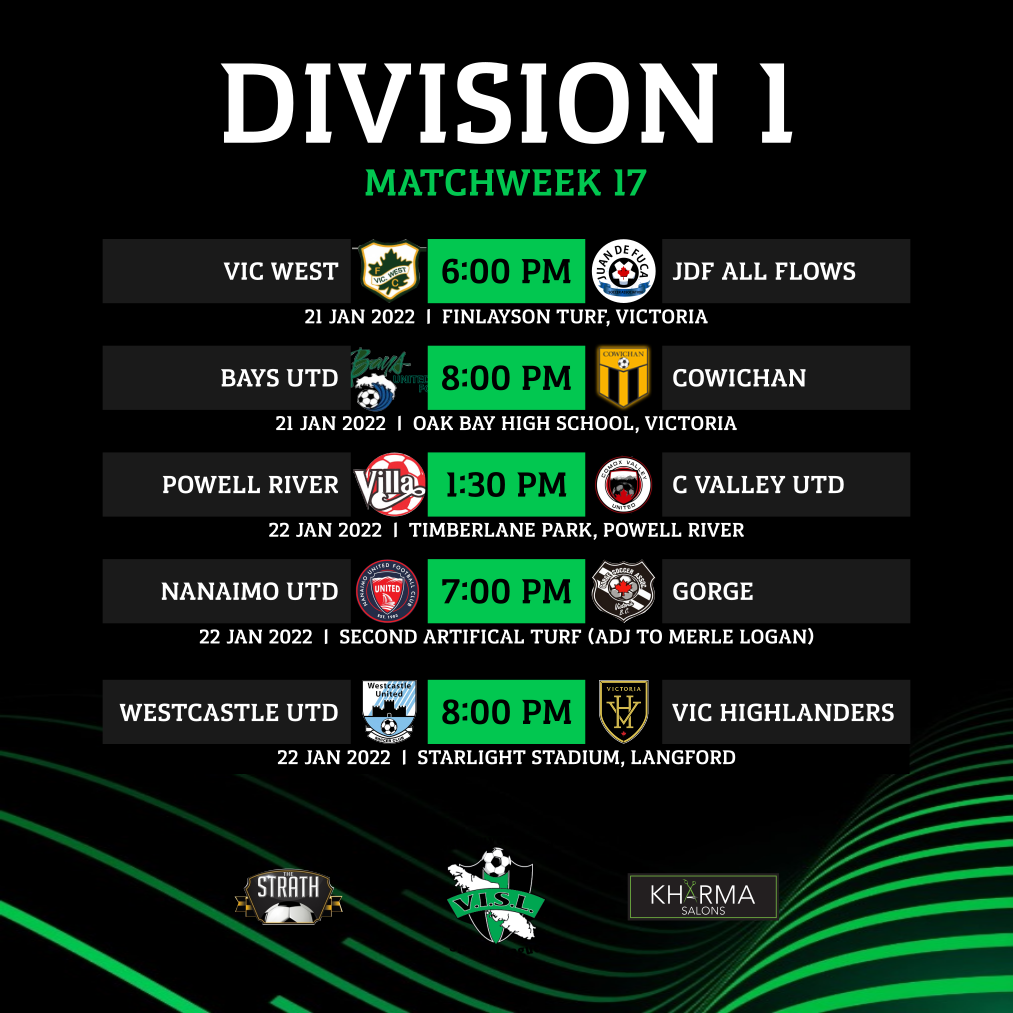