Week 16 was a busy one in the VISL Division 1. A Champion was crowned, and the races within the rest of the division are boiling up.

There are only two full weeks left, and so much is still to be determined, with BC Provincial Cup berths, as well as relegation spots being the two biggest items on the agenda.

Here’s some of the week’s highlights.

* Cowichan started off the weekend of games by clinching the division with a 3-1 win over Bays Utd.
* A Nanaimo and Gorge draw has made a cluster in spots three to five.
* Lakehill’s win over Westcastle keeps the Reds in the hunt for a Provincial Cup berth, while making things a little tougher for the new kids on the block.
* VI Wave’s win over Vantreights puts pressure on Comox and Bays as the three fight for their relegation lives.
* Vic West defeated Comox thanks to a brace from former WFC2 player Victor Blasco, taking a strong hold of second place and force Comox to earn another result to stay clear of the relegation zone.

Here’s all the results from the week’s action:

And all those results leave the Division 1 league table looking as follows: 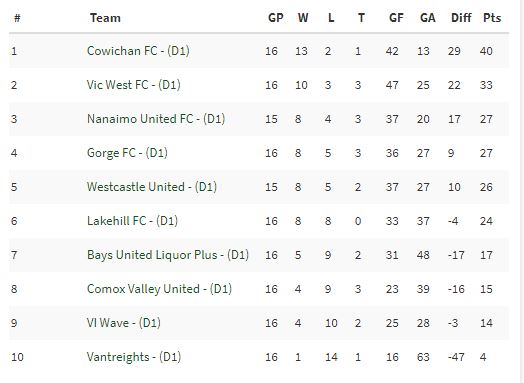 There’s a three way battle in the race for the VISL Division 1 Golden Boot, with Lakehill’s Ryan Andre and Cowichan’s Patrick Nelson hitting 19 goals apiece so far this season, with Nanaimo’s Daragh Fitzgerald sitting two back.

You can find all the VISL results, fixtures, and standings across all the divisions on visl.org.