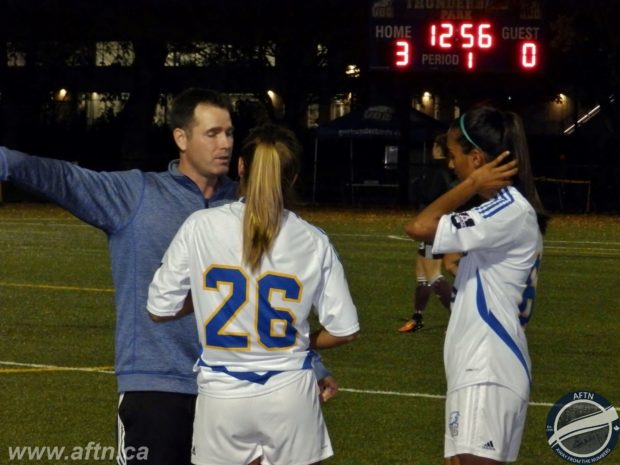 When Jesse Symons came into the UBC Thunderbirds women’s program in May 2016, he had a tough act to follow. How do you follow up winning a CIS national championship on home turf? The answer was take your team to another championship game in your first season in charge.

The Thunderbirds record-breaking sixth national title in 2015 was a fantastic achievement, but a number of senior players moved on after the victory, as did head coach Marisa Kovacs.

After an exhaustive search, UBC went for Symons as her replacement. Symons came to the Thunderbirds with a wealth of experience in the women’s game after ten years with Vancouver Whitecaps’ W-League team and Girls Elite program, and serving as both technical director and head coach for the North Shore Girl’s Soccer Club and WPSL team.

Making the move from club soccer to the college came could be looked at as something of a daunting task, especially coming into such a storied program, but for Symons, taking on the role was a no-brainer.

“Honestly, you look at the men’s coach Mike Mosher, he’s done this over 20 years,” Symons told AFTN. “His father Dick Mosher did it forever. Speaking to them about it, they love it here and I’ve loved every minute and every day of it.

Symons took the Thunderbirds to their second straight national championship game, losing a late heartbreaker to Laval, and feels he learned a lot during his first season at the UBC helm.

“It’s a good league and a good program,” Symons told us. “Some very motivated players. It’s a joy to come to work every day and be part of this program and part of this university. I think overall there’s a lot of pressure to want to do well and compete both on the field and in the classroom for these players.

“They show it each day, day in and day out. It’s a great team to be a part of. I’m really proud of the girls and hopefully we keep running this way through the season.”

For all the many similarities between women’s club soccer and girls youth soccer, the college game does throw up a number of it’s own peculiarities and can be something of a learning curve initially.

There were certainly a few challenges posed to Symons during his first year in the job, but he hopes those learning points will serve him well in his sophomore season in charge.

“Getting consistency from game to game was a big thing,” Symons admits. “Also learning the league a little bit in terms of which shape to play from, what structure to play. Those were a couple of big things that we kind of had to learn.

“I think this year, so far, so good. We’ve figured out some different ideas and we’re keeping the ball really well, having teams chase us, and hopefully that continues in our future games.” 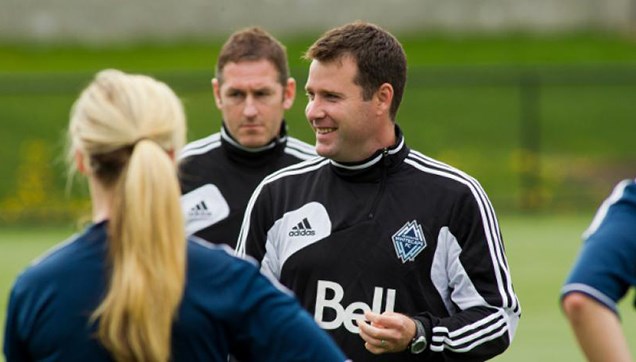 UBC got off to a slow start to their regular season last year. Part hangover from their championship victory, part finding their feet with new personnel, a new coach, and a new way of playing.

The Thunderbirds were unbeaten in their first six Canada West matches, but four of those were draws. They stuttered into the playoffs with just one win from their last four games and their 6-3-5 record was only good enough to see them finish fourth in the Pacific Division standings.

But then a flick seemed to switch and UBC became the dominant team in the playoffs they looked a season earlier. A 3-2 quarter-final win at the higher seeded Alberta Pandas, saw them through to the Select Six where they won all three matches without conceding a goal and saw off the top seeded Trinity Western Spartans in the championship game to claim another Canada West crown.

So just what happened to revitalise the team the way it did?

“I think, honestly, what changed last year was we scored goals,” Symons said. “We created the chances. We outchanced every team in every game last year and didn’t put the ball in the net. This year, it is a mindset to want to create those goal chances still, but be more focused on scoring. That really changed. We got the lead in games and really went at them.

“The other thing is we have such senior players here that they know the experience and understand that when it’s playoff time to really focus in. We are a team that really focuses on October, November, and that’s our goal this year as well.”

With five regular season games remaining, they certainly look set to do just that.

UBC have looked impressive on their way to a 7-1-1 record and sit joint top of not just the Pacific Division, but all of Canada West. The only team to beat them so far are the Victoria Vikes, in their opening match, who also now hold a 7-1-1 record.

The Vikes head to Thunderbird Stadium on Friday night (5pm kick off) in what should be a cracker of a match that should decide top seeding heading into the playoffs. The two teams have only conceded nine goals between them in their combined 18 matches. They’ve scored a combined total of 44 goals in those games, with UBC tallying 27 of those.

You would expect both those teams to be battling it out for the Canada West championship next month, but UBC will also have an eye on a seventh national title and three straight championship game appearances when the U Sports nationals hit Winnipeg in November.

“That’s a goal of theirs,” Symons said of his team’s mindset. “They’ve had the experience. We had a heartbreaking 88th minute goal against, against Laval last year in the final, and they’ve come very motivated this year to do well. We had a great preseason. Played some good teams in the spring last year too.

“Overall, we’re in a really good spot right now if they stay healthy and motivated and we get through this league play and we focus on the playoffs, where anything can happen. Overall, we should be able to be pushing in the playoffs at a good level, which I think we’re on pace to do right now.”