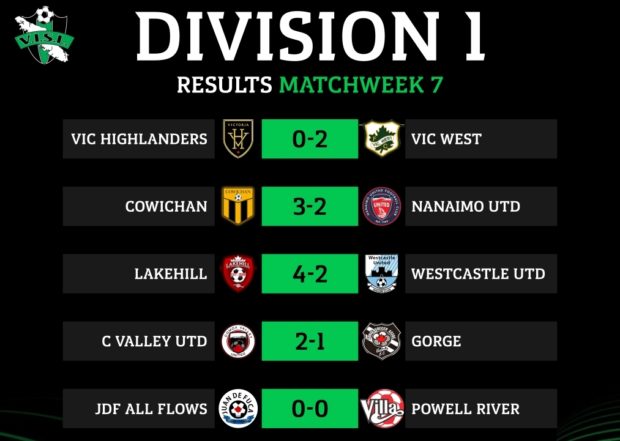 It was a special weekend for all of the Vancouver Island Soccer League (VISL). A weekend that will be remembered as Induction weekend as the Greater Victoria Sports Hall of Fame opened the doors to it’s newest member.

We’ll have more on that later, but we’ll kick this week’s round-up with the latest action from VISL Division 1, in what was an exciting weekend that was filled with surprising results.

Friday started out with a bang as Vic West surprised second placed Victoria Highlanders, coming away 2-0 winners at Starlight Stadium thanks to two first half goals. Maslah Hassan Farah opened the scoring 10 minutes in before Ryan McCurdy doubled Vic West’s lead in the 28th minute. The visitors went down to ten men in the second half and Highlanders pushed hard for a way back into the game but couldn’t find a way past Daniel Young-Mercer in the Vic West goal.

Friday saw another upset of sorts as Cowichan defeated Nanaimo Utd 3-2 at Sherman Road, in the battle between what was the then 3rd and 4th placed teams, both of whom had a game in hand on the top two. Connor Crichton put Cowichan ahead in the 19th minute and Blaze Roberts made it two a minute before half time. But that was just to be the start of the drama before the teams headed in for the break.

Nanaimo were awarded a penalty moments later, which Caleb Nwameme dispatched from the spot, and in the subsequent furore, Cowichan’s Roberts was sent off for using offensive language.

The man disadvantage didn’t deter Cowichan though, and Jordan De Graaf restored their two goal lead ten minutes after the restart. Paddy Greig scored for Nanaimo with three minutes remaining to reduced the deficit, but they couldn’t find a dramatic late equaliser to grab a share of the points.

Friday wrapped up with undefeated league leaders Lakehill surviving a scare from Westcastle before coming away with the 4-2 victory at Braefoot Park. Blair Sturrock opened the scoring for Lakehill four minutes before half time, with Jon Shah adding a second on the stroke of half time.

Westcastle came storming back in the second half. Norbert Aba pulled one back in the 64th minute and Callum Colgate completed the comeback seven minutes later. This just sparked Lakehill on and Simon Norgrove restored their lead in the 76th minute. Aba was sent off for Westcastle with seven minutes remaining and Alexander Moody wrapped up the match with a fourth for the league leaders in stoppage time.

Saturday saw hometown Comox earn some valuable points by defeating Gorge 2-1 at Courtenay’s Vanier Turf. All the goals came in the second half in this one, with Kyle Bate putting Comox ahead in the 65th minute from the spot and Emile Abele doubling their tally 11 minutes later. Angus Hayman got sent off for the home side with 10 minutes remaining and Dominic Colantonio pulled a goal bank for Gorge in the 85th minute, but Comox were able to hold on for the three points.

Sunday saw Powell River Villa in town to face Juan de Fuca Allflows, and the sides played out a 0-0 draw. Recording the shutout for JDF was Cody Carter, with Matthew Liknes doing the same for Villa.

So after all those results, here is what the VISL Division 1 table looks like: 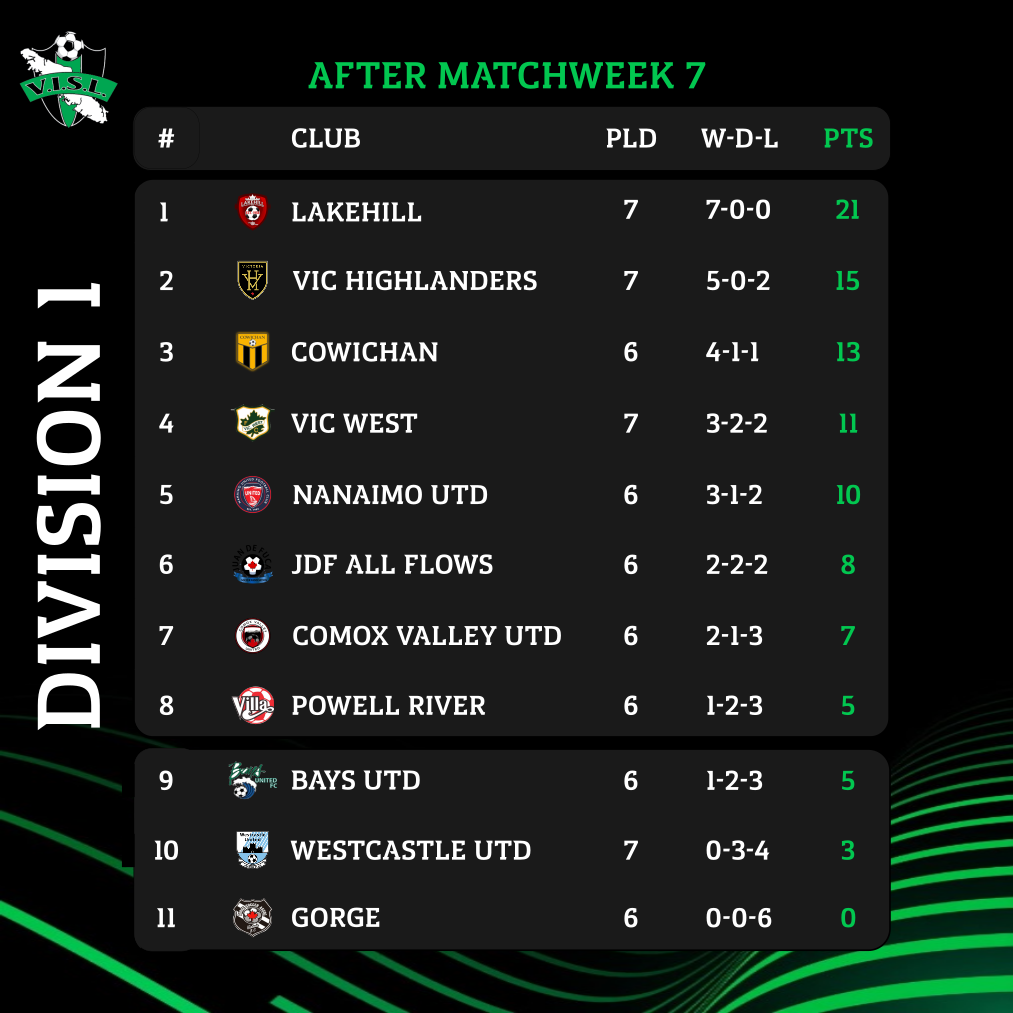 Lakehill are still undefeated at the top, and they appear to be running away with the division.

Victoria Highlanders loss to Vic West has the young squad slipping back some, and they will be facing an early must win game coming up next week.

A surprise of the season has to be Cowichan as they keep pulling off excellent results – including their recent win over Nanaimo United who were favoured to be near the top of the table as well.

Vic West has a good result this past weekend, but have some catching up to do if they want to get back into the Garrison Cup conversation.

The bottom of the table is tight with Bays, Powell River, Westcastle, and Gorge all on 5 points or less. The most surprising being that Gorge are still looking for their first point of the season.

In the battle for the Golden Glove, the keepers are starting to post more clean sheets, but Lakehill’s Hardeep Gahunia continues to lead the way with three shutouts.

The Golden Boot battle is also hotting up and there is a log jam at the top, with Cowichan’s Jordan De Graaf and Bays United’s Patrick Nelson out in front on eight goals apiece. Here is what that chase looks like: 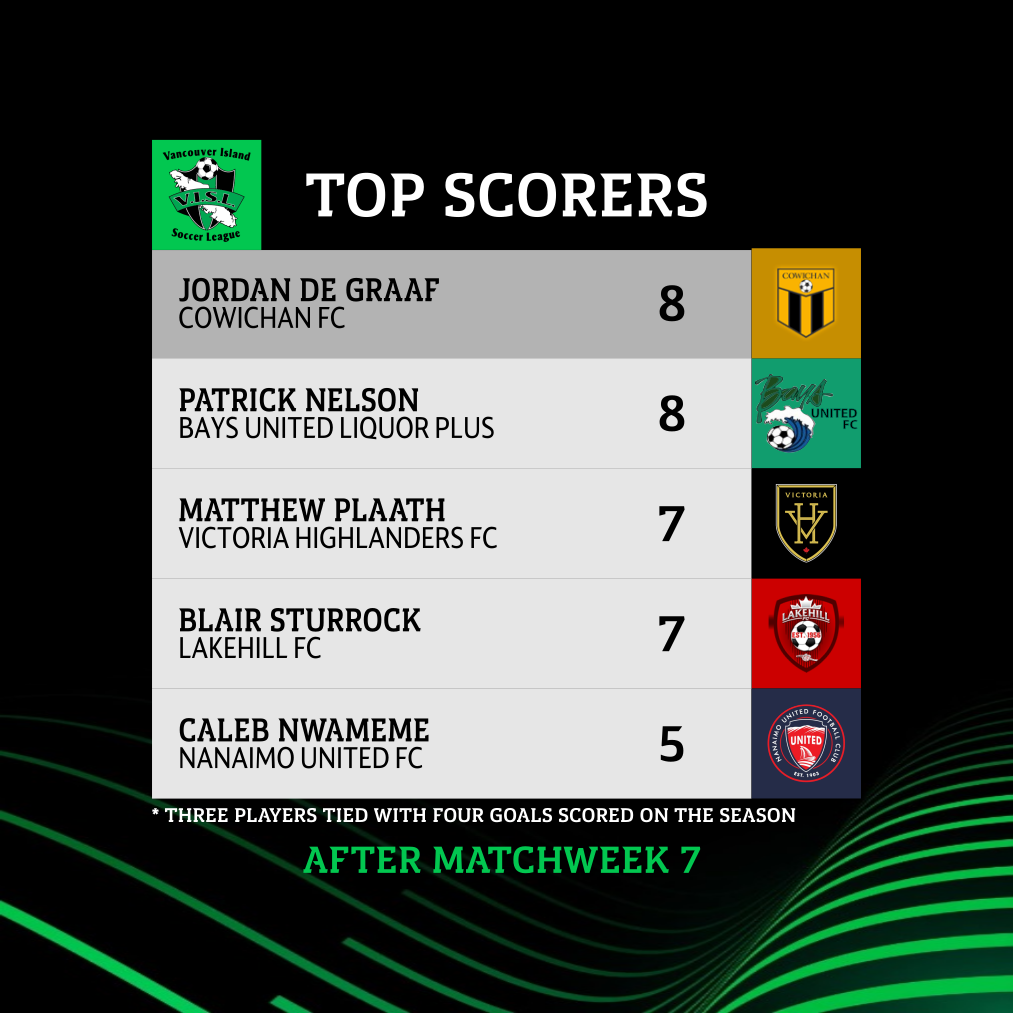 So a fantastic weekend of soccer on the pitch, but there was a huge celebration off the pitch as well.

As mentioned earlier, the VISL was inducted into the Greater Victoria Sports Hall of Fame.

The induction was announced last year, but the celebration and event was finally able to take place this past weekend at the Ocean Pointe Resort on Saturday night where several athletes, builders, and now a League were announced and crowned.

An excellent celebration saw 24 VISL honoured guests in attendance, from past President Award winners, to former players, and current administrators. You can find out more information by visiting gvshof.ca. 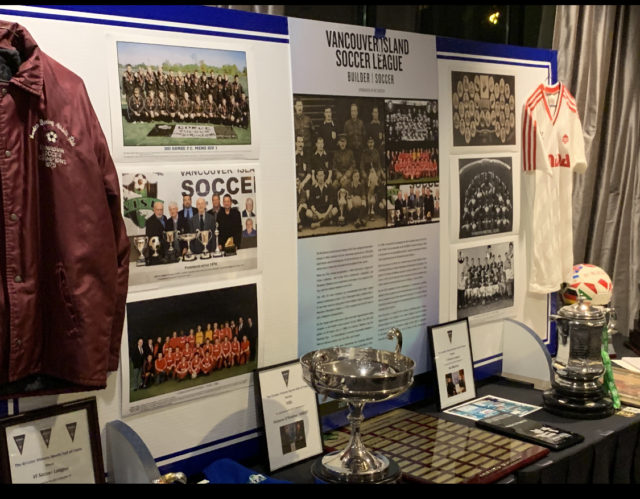 Matchweek 8 is upon us, and if we survive the rain and wind, there will be some good amateur soccer to be played this weekend on the island.

It is a loaded Friday night, and there are many things on the line for the top, the bottom, and everything else in between in an important week in the division.

Westcastle and Gorge are set to do battle and this should be an interesting match. While many are thinking Gorge are due, many are also thinking that Westcastle have been unfortunate not to get a couple other results. Westcastle will come at Gorge with pace and endurance – the black and white will need to be sharp if they want to earn there first points of the season.

Nanaimo are looking to get back to their winning ways and will host Comox. The Central Island squad feels they should be at the top of the division, this will be a much needed in for them. A win by Comox gets them right into the middle of the division and tied with Nanaimo. Will be a tough match for the North Island Boys though.

Bays United take on Juan De Fuca Allflows and who knows which teams will show up. Bays are coming off a quiet weekend and much needed break after a couple tough matches. JDF will look to vault up the standings and get into the thick of things with a win. These teams always match up well – it too will be a dandy of a matchup.

The highlight Match of the Week sees Lakehill hosting Victoria Highlanders. Top of the table and undefeated Lakehill were a little exposed against a young Westcastle squad – did they make some adjustments? Highlanders slipped a notch as they went down to a seasoned Vic West squad last week.
This is movement time for these 2 teams. A win for either team will be big as it will help determine their fate in the chase for the Garrison Cup.

Wrapping up things, a treat of a game is in store in Powell River as the Villa squad hosts upstart Cowichan. Villa will look to get some points at home to turn around their last couple matches. Cowichan – they are interested in contending, not rebuilding – so they will look to travel well and earn some points at Timberlane.

Vic West will have the weekend off.

Here’s all of this week’s Division 1 fixtures: 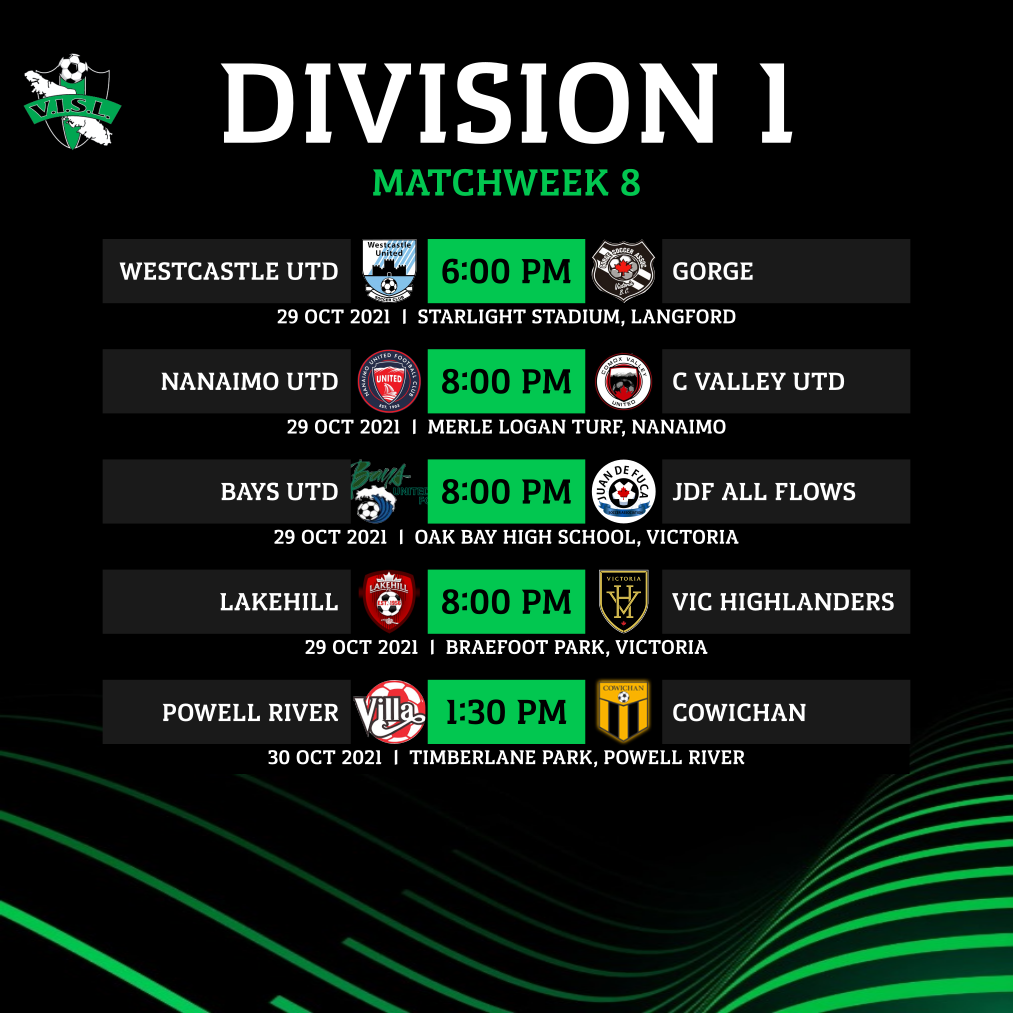