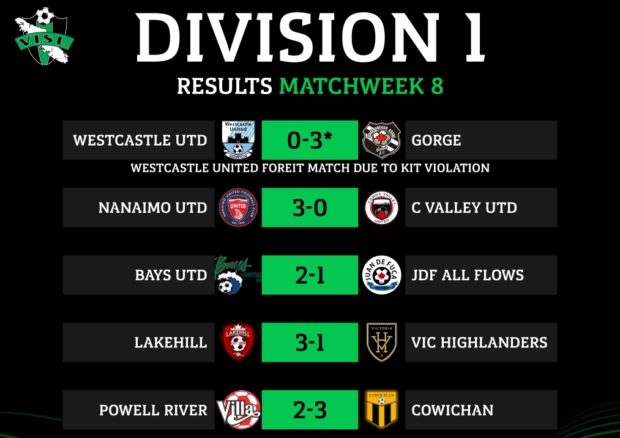 It was an exciting weekend of local amateur soccer in the Vancouver Island Soccer League (VISL), capped off with a little trick or treating in addition to the treats served up on the pitch.

Friday started off with the most odd of situations.

Gorge finally got their first points of the year – via a forfeit from Westcastle. Westcastle did not have kit for the match, so it goes down as a 3-0 win for the Gorge team.

A soccer game was then played for the next result and it had Nanaimo defeating Comox Valley by score of 3-0. Scoring for Nanaimo was Daragh Fitzgerald, Patrick Osakabe-Green, and finally Matthew Mehrassa finishing up with what might be the best goal of the year to this point anyways… a scorching shot from 40 yards out that went top corner. Providing the clean sheet by Nanaimo keeper Geoff Hackett.

Friday also saw Bays Utd slip by Juan de Fuca Allflows 2-1. Mark Ashlee and Patrick Nelson were on target for Bays, with the loan marker for JDF from Ignacio Ovalle.

Friday night wrapped up with what was the Game of the Week and a battle between the then top two in the division, and it had Lakehill defeating Victoria Highlanders 3-1. Blair Sturrock, Alexander Moody, and Craig Gorman were the scorers for the leaders and the loan marker for the Highlanders was netted by Matthew Plaath.

Saturday had the one matchup, and Cowichan went into Powell River and defeated Villa by score of 3-2. Cowichan goals came from Jordan Korven, Dan Citra, and Jordan De Graaf, with Niko Cristante and James Timothy with the goals for the Villa.

And all of that action leaves the VISL Division 1 standings as follows: 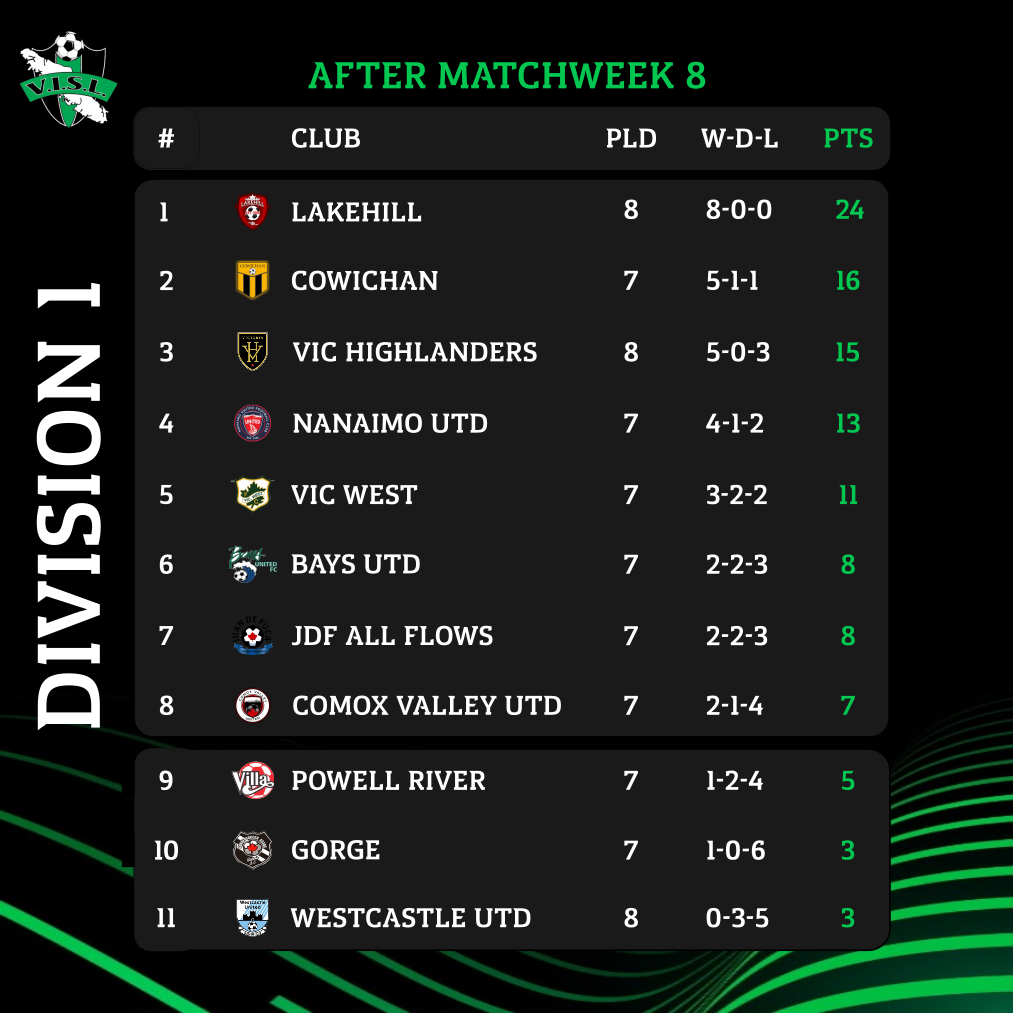 There were big stories at the top and bottom as expected, and we were not disappointed.

Lakehill stays undefeated and all alone in 1st place with their win over the Victoria Highlanders. They seem to be running away with the division and looking very good to capture another Garrison Cup at this point of the season.

The Westcastle forfeit confused many, and it lifts Gorge out of the cellar with Westcastle taking their place. Pretty sure we won’t be seeing that happen again this year.

Some other good battles are happening in the middle of the table, but seeing Cowichan in second place definitely has raised some eyebrows. Results and the current situation are very similar to when the Cowichan team was at their finest. It will be interesting to see if they can keep that going.

There was a little adjustment to the Clean Sheets leaderboard with Hackett of Nanaimo moving up a slot, but Hardeep Gahunia still leading the way.

Scoring wise – all the big boys scored, so there is a huge jam up at the top. Patrick Nelson still leads the way as he was the first to get there – so seniority in ways! Here is how the Golden Boot leaderboard is shaping up: 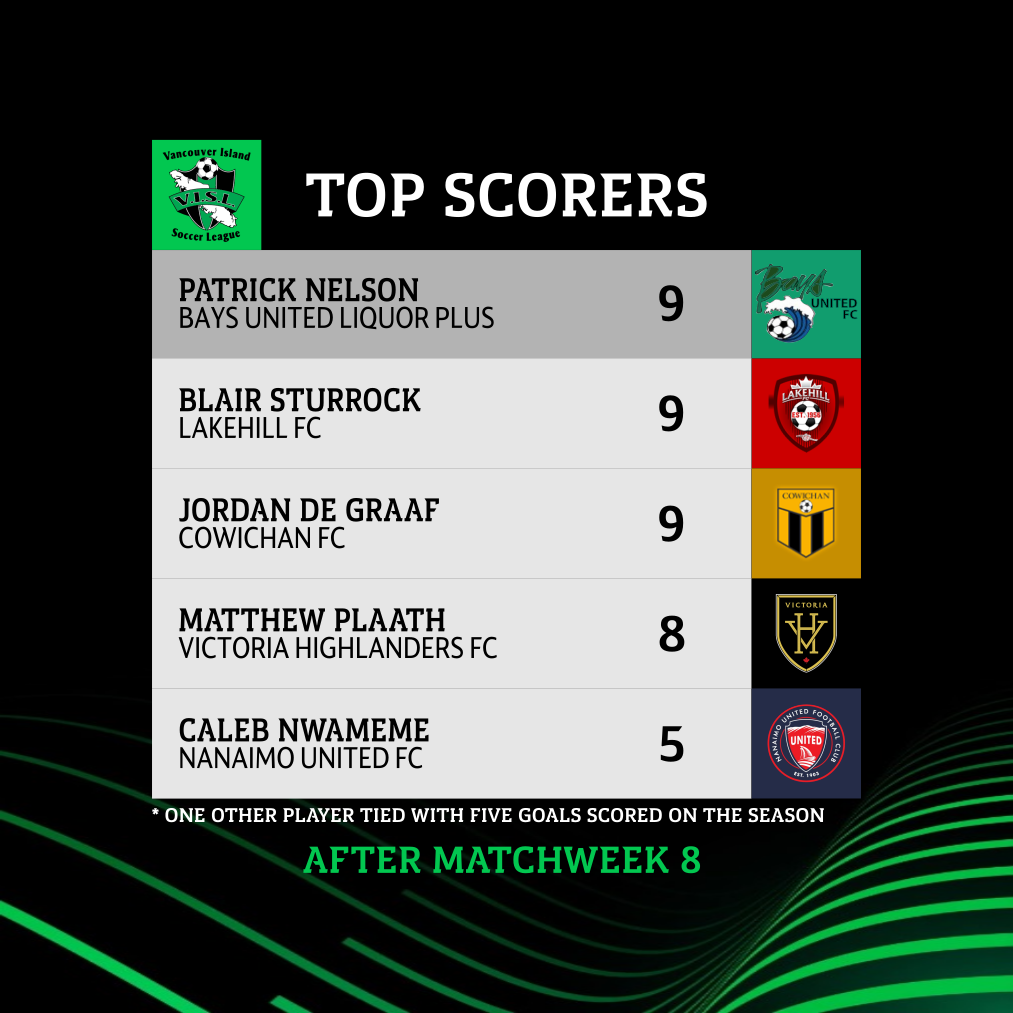 So what drama will unfold in Week 9?

Friday gets off with a bang as old rivalries are renewed in Cowichan as Bays Utd makes the trip over the Malahat. Coach Flynn has the Cowichan squad firing on all cylinders and right at the top of the division, while Bays are working to stay in the middle of the pack. Bays will be in tough, and will need their MVP Patrick Nelson to lead the way.

Friday also sees Gorge host Nanaimo in what will be a tough match for the Saanich team. Even with Gorge riding the wave of their first win of the season (albeit in the most peculiar of ways) they will have a tough time dealing with Nanaimo. The mid island team are looking good and have been playing some good soccer.

A north Island battle in ways sees Comox hosting Powell River on Saturday. Both teams are near the bottom of the table, so three points will be huge here. This should be a battle as both teams do not mind working hard.

Saturday also sees Juan de Fuca host Vic West at Starlight Stadium. Vic West have been playing better of late, and have had a week off to rest some early injuries. JDF will try to bounce back after a tough loss to Bays.

The weekend wraps up with the Victoria Highlanders hosting Westcastle at Starlight as well. Both teams are coming off losses and will look to gather all the points. What we know for sure is that it will be a fast paced game with plenty of youth on the pitch.

Division leading Lakehill will have the weekend off, so will still be undefeated come the end of the weekend. 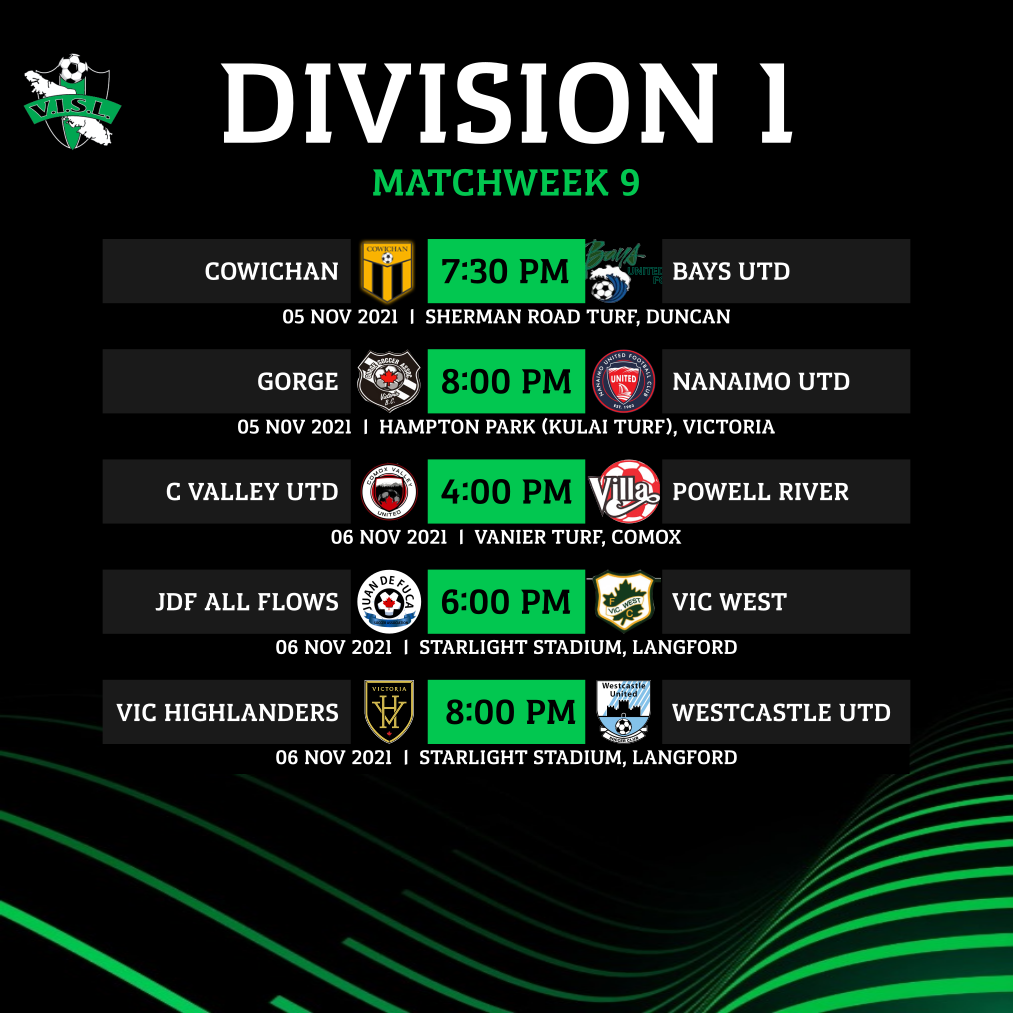 This time of year presents situations where every game will have an affect and positions will change. No doubt, teams are keeping in the back of their minds, that the bottom three teams are in the relegation zone, so expect a lot of excitement and drama in the weeks to come.