The two teams leading the way at the top of the Vancouver Metro Soccer League (VMSL) Premier Division standings met in an eagerly awaited match-up in Week 8 action this past weekend. Would one team get a bit of breathing space or could the chasing pack close the gap? As it played out, the answer was no as two goalless draws were the order of the day for the top three sides.

But despite a third of the top flight action failing to produce a goal, the other four matches produced 18 goals between them.

The match of the weekend saw first placed BB5 United CCB host second placed Coquitlam Metro Ford Wolves at Newton Stadium on Friday night with just a point separating the pair. And perhaps it was only to be expected then that there was nothing between the two teams once the action got underway with neither side able to break the deadlock and the match finished 0-0.

That stalemate provided third placed Rinos VSC Coastal with a great opportunity to close the gap on the top two, but they also found themselves playing out a goalless draw at home to SFC Pegasus at South Surrey on Saturday afternoon.

So with the top three all dropping points, the big winners this week were VUFC Hibernian who headed to Ambleside and trounced West Van FC 4-0. Jack Napier-Ganley hit a brace with Liam Robinson and Sebastian Dzikowski also finding the net for the UBC lads.

Friday’s other match saw BCT Rovers Hurricanes bounce back in style from their heavy defeat to Metro Ford the week before with a 5-2 win at Inter EDC at Burnaby Lake. Hurricanes leading scorer Nick Soolsma took his tally for the season to seven with another brace, while Cam Hundal, Eric Brooke, and Pavi Dhillon also got on the scoresheet for the Surrey side. Andres Rodriguez and Massud Habibullah scored for Inter. Aside from the scoreline, this was a big win for the Hurricanes as it moved them out of the relegation places for the first time this season, finishing the weekend in 9th.

Sunday’s action all took place at Burnaby Lake and it kicked off with Croatia SC and MAFC Elite playing out a 2-2 draw in the afternoon. James Najman hit a double for Croatia, with Mateo Martinez and Shahrooz Rashidi scoring for Metro Athletic.

So after all of that action, here’s how the VMSL Premier Division standings look after Week 8: 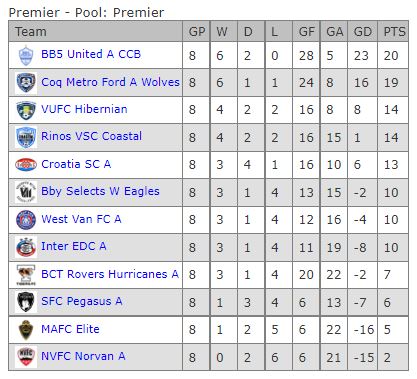