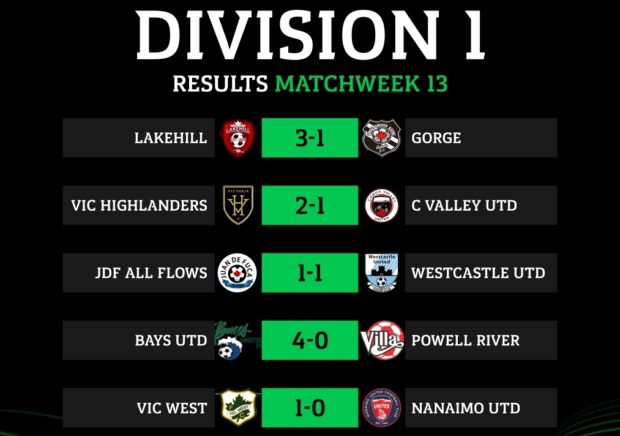 What a weekend it was for local soccer!!

On a weekend that saw Vancouver Island’s professional soccer team, Pacific FC, win it’s first ever Canadian Premier League championship, the amateur side of things sure got interesting as well.

The top flight of the Vancouver Island Soccer League (VISL) took some interesting steps towards crowning a divisional champion in the top division – Division 1. Here’s how the Week 13 action played out.

There was just one game on Friday night and it saw the battle of Saanich as runaway league leaders Lakehill defeated Gorge 3-1. Lakehill had goals from Craig Gorman and a Wesley Barrett brace. Providing the solo marker for Gorge was Matteo Ruffolo.

Saturday got started at Goudy Turf and Victoria Highlanders slipped by Comox Valley United 2-1 thanks to goals from Jackson Belbin and Koby Greaves. The Comox goal was scored by Kyle Bate.

Next door at Starlight Stadium, Juan de Fuca Allflows and Westcastle battled to a 1-1 draw. The Westcastle goal was scored by Eric Karigo, with Aaron Burnell on target for JDF.

The weekend wrapped up with Vic West shutting out Nanaimo 1-0 thanks to a Maslah Hassan Farah goal. Recording his first shutout was Vic West Keeper Maxwell Gil.

So after all of that action, here’s how the VISL Division 1 standings look after Week 13. 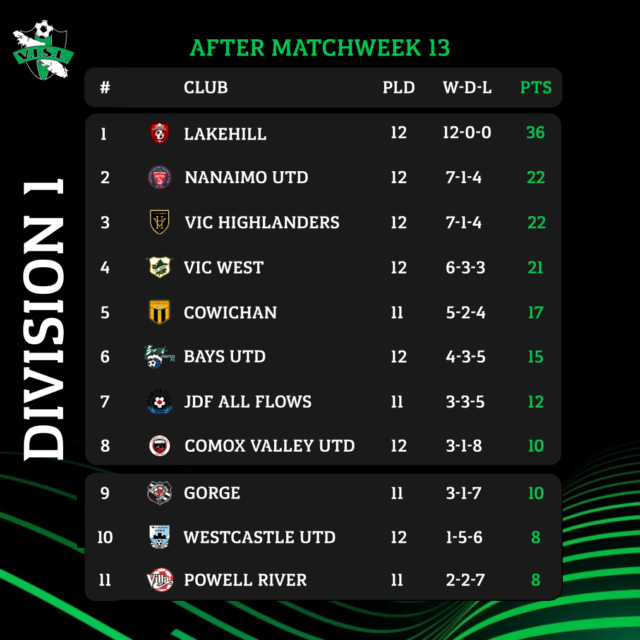 Lakehill continues to roll, and they are officially counting down the number of wins necessary to claim their second straight Garrison Cup. The big question remains will they be able to keep a 100% record all the way through till the end? And then can they carry that form into the BC Provincial Cup?

Vic West and Victoria Highlanders wins has really put the pressure on Nanaimo now. The battle for second place is tight, and only one point separates three teams.

Bays and Juan de Fuca have given themselves a bit of room in eluding the teams from the bottom. Comox, Gorge, Westcastle, and Powell River find themselves battling to see who stays in the relegation zone. Two points separates all four teams.

A couple new keepers have earned their first shutouts of the year, but Lakehill’s Hardeep Gahunia still leads the Golden Glove Leaderboard with four shutouts. Plenty of goals on the weekend, but not a lot of movement on the Golden Boot Leaderboard, with Blair Sturrock still at the top, and Patrick Nelson trying to catch up. 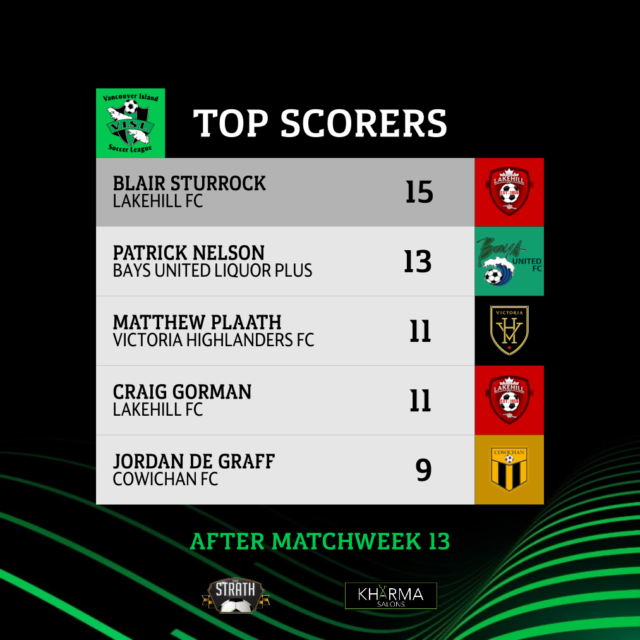 It seems like every weekend has some really big games, and this weekend is no different.

Friday gets rocking with Cowichan hosting Juan de Fuca Allflows at the Sherman Road Turf. This is a middle of the pack battle, and both teams will be looking for the full three points. Cowichan will look to right the ship after a few tough matches, and JDF will look to further move themselves away from the relegation zone.

Friday also sees a monster match up at Merle Logan Turf in Nanaimo. It’s 1st v 2nd and most likely the last chance for Nanaimo to keep their Divisional championship aspirations alive. A Lakehill win, besides keeping them undefeated, will get them one step closer to clinching the division.

Friday wraps up with Gorge hosting the Victoria Highlanders at Hampton Park. Gorge will be in tough against the youngsters, but will also be looking to get out of the relegation discussion. The Highlanders will look to jump into 2nd place in the division, and will need full points to do so.

Saturday sees Powell River finally going home and hosting Vic West. A big match up for both teams, for two entirely different reasons. Villa will look to get out of the basement, while Vic West will look to stay relevant in the top four to preserve their anniversary celebration and the goal of advancing to the Provincial Cup.

Saturday wraps up with Westcastle hosting Bays Utd at Starlight Stadium. Westcastle will look to draw some Pacific FC strength from the Stadium as they are also in the basement of the division. A huge match-up, especially as Comox has the weekend off with a bye. 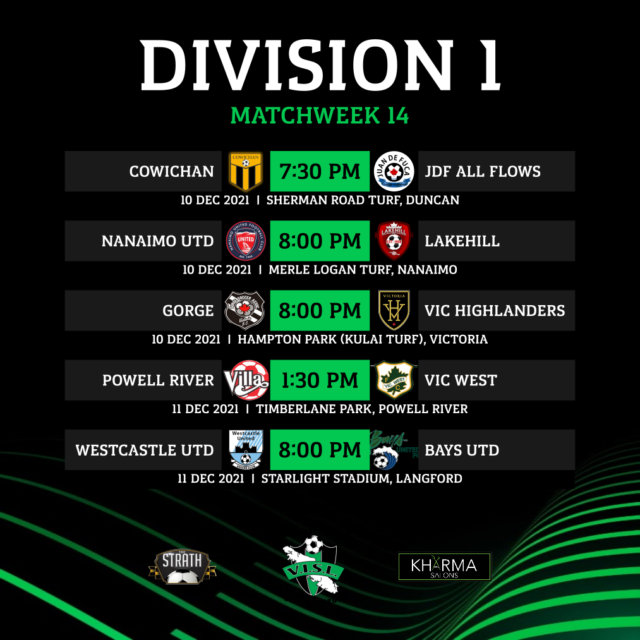 So a couple of nights of loaded soccer as we start to get closer to the Christmas break.

The VISL, in coordination with Gorge and Lakehill, will also be offering a meet and greet with Santa this Saturday.
We have arranged for Santa to be at Hampton Park on Saturday morning from 9-12, then at Braefoot from 1-3:30 pm. Pictures with Santa will be by donation. Our charity of choice for cash/cheque donations will be CFAX’s Santa’s Anonymous.