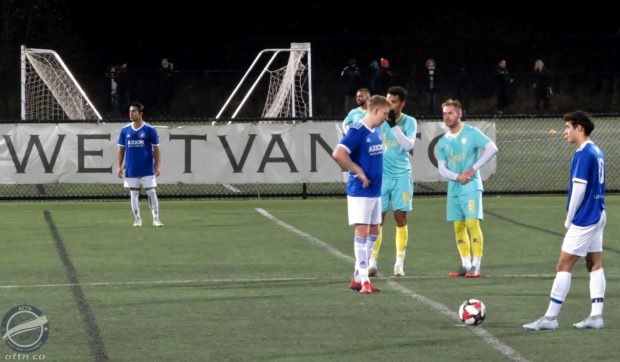 Another interesting weekend of Vancouver Metro Soccer League (VMSL) action played out in Week 14 of the 2021/22 season, and by the end of it the unbeaten league leaders, BB5 United CCB, saw their lead at the top of the table extended to five points.

With a game also in hand, it’s hard to see who will be able to stop the Surrey side this season, but there’s a big match-up coming up on Friday night at Newton Athletic Park that could shape how much of a title race we will see over the remainder of the league campaign.

BB5 kicked off the weekend’s action at Ambleside Park in West Vancouver on Friday night, and they were forced to come from behind before dominating in a 5-1 victory over West Van FC, in a match that saw both sides finish with ten men after a second half bust up.

It was a lively start to this one and it was West Van who went ahead in the 14th minute when Eoin McCormack was played in and finished across goal to the far post from a tight angle. BB5 pushed hard for the equaliser, squandering a number of chances before a West Van own goal off a corner on the half hour mark saw the teams head in at the break on level terms.

The parity wasn’t to last long as the second half got underway and BB5’s Nic Morello grabbed his 12th goal of the season he tucked away a perfectly placed ball from six yards out.

A flashpoint three minutes later saw players from both sides coming together after West Van’s Kiya Darbandi clattered heavily into BB5’s Boris Si at the halfway line, a tackle and flare up that saw both of those players sent off.

After that, the visitors took over and Yassin Essa scored a rare header just before the hour mark, when he rose to flick in an inch perfect cross from Connor Glennon to make it 3-1 BB5. Rylan Sangha made it four in the 67th minute when he got onto a fantastic long ball for Nic Morello and coolly slotted it past the West Van keeper, and Ramsey Alfantazi saw the league leaders go nap, when he rounded off the scoring three minutes later, finishing off a Glennon cutback from close range.

To their credit, West Van kept pushing and had some chances late on, but couldn’t find the breakthrough or the finishes to reduce the deficit and the Surrey side ran out comfortable 5-1 winners.

You can see all the goals and our extended highlights from the match below and on the AFTN YouTube channel. We had some major focussing issues on our camera at times in this one. Not sure if it was due to the lighting or the cold, but hopefully it doesn’t spoil things too much:

That win has BB5 sitting pretty at the top of the table and they ended the weekend with a five point lead over the chasing pack, as their romp to the title feels almost a certainty. Can anyone stop them? Coquitlam Metro Ford Wolves and Rino’s VSC Coastal will still certainly believe they can. Both currently sit tied in second spot, but it’s still all out of their hands to do so.

Metro Ford were also in action on Friday night and came away with a 2-1 victory over SFC Pegasus at Newton Stadium thanks to goals from Ryan Ashlee and Vito Iacobellis. Shabaz Khattra was on target for the Horsemen.

Coastal looked sharp in this one early, crashing the ball off the Hurricanes bar just 16 seconds in and both sides had some good chances to break the deadlock in the first half, but couldn’t find the breakthrough.

It was the Hurricanes who eventually opened the scoring four minutes into the second half and it was an absolute screamer that did it for them, with Brady Weir curling home a 20 yarder into the postage stamp corner.

Coastal pushed hard for the equaliser and it came in the 62nd minute when leading scorer Isaac Kyei grabbed his fourth of the season, finishing off a nice passing move from the home side.

Both teams had chances to grab the winner, but when Coastal went down to ten men in the 69th minute when Sean Kamensek was sent off for a last man challenge on a Hurricanes breakaway, their job got harder and they had to settle for a point on the day and two big ones dropped in the title race.

You can see Sport Revolution’s highlights from the match below and on their YouTube channel:

That draw saw Coastal fall back to five points off the pace at the top and they now face a huge game on Friday night at Newton when they travel to take on BB5 United. A win and the title race is back on for them, a defeat and they’re looking at a battle to be runners-up.

Saturday’s other game saw NVFC Norvan grab a crucial point in a 1-1 draw at home to Inter EDC at Fen Burdett Stadium. Although the North Shore side are needing to start picking up victories if they want to stave off relegation, every point counts, and Devin Delany’s goal could be an important one down the stretch. Whitecaps Academy alumni Alan Camacho was on target for Inter.

The bottom two sides in the VMSL Premier will automatically go down this season, but that point moves Norvan to within three of 10th, and the relegation playoffs, and four to 9th and safety. Still a very long way to go for them but they now face a huge relegation six pointer with last placed MAFC Elite on Sunday at Burnaby Lake. Whoever loses that one will surely be facing the drop.

MAFC went down to a 1-0 defeat to VUFC Hibernian up at UBC on Sunday afternoon, with Mohammed Alghamdi grabbing his second of the season in the only goal of the game.

The Week 13 action was rounded off at Burnaby Lake on Sunday night and it was another solitary goal that decided this one, with Joseph Mijaljevic’s winner giving Croatia SC the 1-0 win over Burnaby Selects White Eagles. 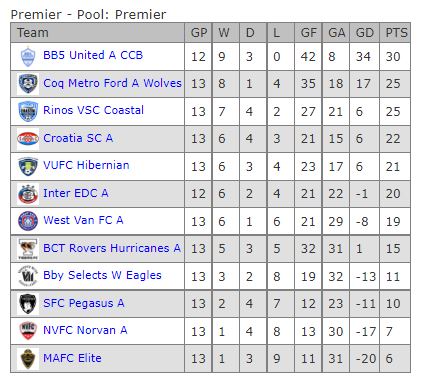