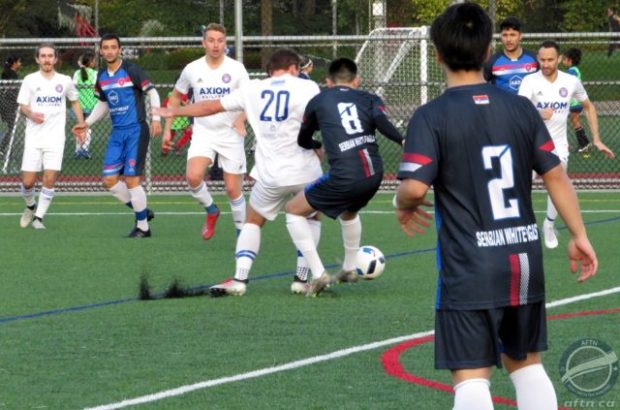 Four weeks into the 2021/22 Vancouver Metro Soccer League (VMSL) season and there already feels like there’s a split developing between the top six teams that will be fighting for the title and Provincial Cup places and the bottom six that will be looking to avoid finishing in one of potentially three relegation spots.

The Week 4 action saw the top six sides all pick up points, four of them securing victories, and while BB5 United CCB and VUFC Hibernian kept their unbeaten records intact, it’s the Surrey side who now hold on to top spot on their own after another big win and a clean sheet.

BB5 saw off Surrey rivals SFC Pegasus 3-0 at Newton Athletic Park on Friday night. Caleb Clarke opened the scoring for BB5 in the 32nd minute and added a second four minutes into the second half from the spot, taking his tally for the season to a league-leading six. James Graham sealed the three points for BB5 with a third goal of the night for BB5 eight minutes from time.

That win moves BB5 onto 10 points, one ahead now of Coquitlam Metro Ford Wolves and Club Inter EDC at the top of the standings.

A Juan Sanchez double saw Coquitlam Metro Ford Wolves come away 2-1 winners at home to NVFC Norvan on Friday night, with Devin Delany on target for the north shore men. 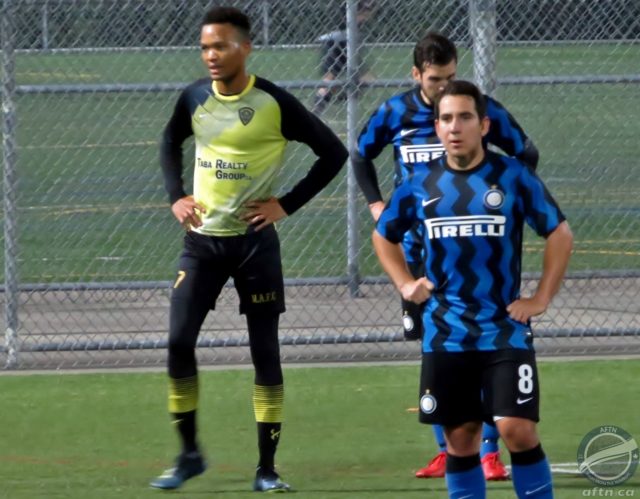 Inter secured their third win of the season at Burnaby Lake on Friday night in an entertaining encounter with MAFC Elite, which saw them run out 1-0 winners.

Both sides had their chances to open the scoring in an end to end first half, which Inter certainly shaded and were denied by the woodwork twice.

The deadlock was finally broken in the 56th minute and it was a fantastic strike from Alex Marrello that did the damage, as his 25 yard curler left the keeper rooted to the spot as it nestled in the side netting.

MAFC tried to find the equaliser, but were lacking any real quality in the final third and Inter saw out the game and claim all three points.

You can watch our highlights from the match in the video below:

Friday’s other match saw VUFC Hibernian lose their joint spot at the top of the standings after they dropped two points at the previously pointless BCT Rovers Hurricanes.

The Hurricanes were looking to start to turn their season around at Newton and they got off to a great start when Gurjot Lehal put them ahead in the 27th minute. When Pavi Dhillon made it 2-0 ten minutes into the second half, it was looking like they might get their first win of the season, never mind their first points, but VUFC came storming back.

Chris Fisher pulled one back for the visitors in the 71st minute and the comeback was completed in the 89th minute when Mohammed Alghamdi fired home to make it 2-2 and grab a share of the points.

The last two Premier games of the weekend took place on Sunday at Burnaby Lake and the action kicked off in the afternoon with a 2-2 draw between Croatia SC and Rinos VSC Coastal.

Theo Lorenz had Croatia one up just three minutes in but Coastal levelled in the 34th minute through former Whitecaps academy player Massud Habibullah. Croatia weren’t to be denied their half time lead though and Mario Kovacevic gave them that in the last minute.

Both teams pushed for the crucial next goal after the restart, but it took to the 80th minute for it to come, with Brede Kidd levelling the game again for Coastal and both sides had to settle for a point apiece. 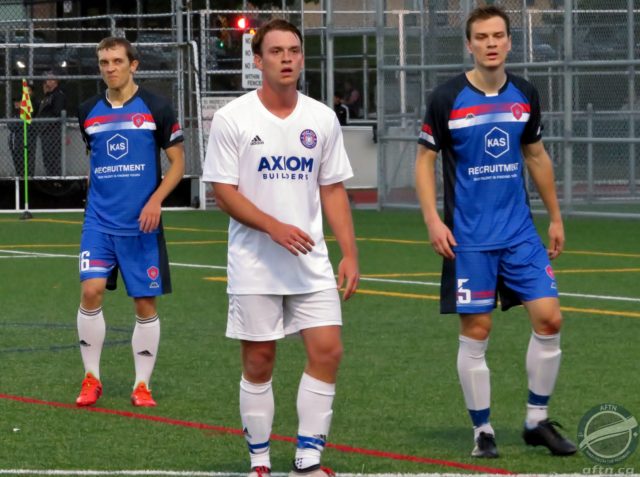 The weekend wound up with an entertaining end-to-end affair between Burnaby Selects White Eagles and West Van FC, two mid-table sides that could propel themselves into the top half with a win.

Both teams created a number of goalscoring opportunities in the first half, with the White Eagles looking the more dangerous side in the opening exchanges, seeing an early effort tipped onto the bar. But it was West Van who took the lead eight minutes in when Bryce Millway ran onto a long through ball, chipping the ball over the advancing keeper.

The Burnaby boys squandered a couple of great opportunities to get themselves back level, the best of which came in the 37th minute when they were awarded a penalty, which Hudson Nelles got down well to turn round the post. West Van countered quickly from the resultant corner and Millway tucked away his second of the match to give the visitors a 2-0 lead at half time.

West Van were in control for much of the second half, dealing fairly comfortably with what the White Eagles were throwing at them. Millway then put the game to bed in the 72nd minute, grabbing his hat-trick in the process, when he got onto a bouncing ball into the box from a long free kick, took a touch with his head, and knocked it over the keeper from close range to make it 3-0.

The Burnaby side had a couple of late efforts cleared off the line, and while it didn’t feel like a three goal difference between the two sides, West Van came away with three big points.

You can watch our highlights from the match in the video below:

All of that Week 4 action leaves the VMSL Premier Division standings as follows: 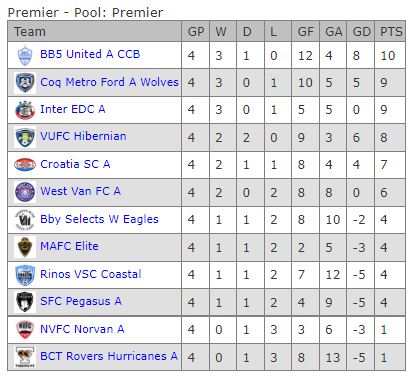 Here’s what on the slate over this Thanksgiving weekend in the VMSL Premier.