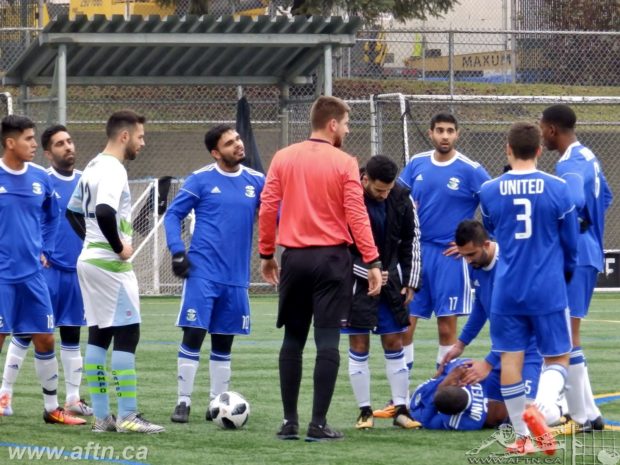 The Vancouver Men’s Soccer League (VMSL) got back into action after the Christmas break last weekend, with a full slate of matches and some important results in the various promotion and relegation battles through the divisions.

The rest seemed to rejuvenate the players in the Premier Division, with the six Week 16 match ups producing 24 goals between them.

The break, and the wet weather, certainly didn’t dampen leaders BCT Rovers Tigers United in their run for the Premier title. A hat-trick from SFU Clan midfielder, and Whitecaps Residency alumni, Rahid Rahiem and a ninth of the season from Pavi Dhillon gave Rovers Tigers a comfortable 4-1 win at home to relegation threatened EDC Burnaby at Newton on Friday night, keeping their lead over second placed Pegasus FC at six points. Samuel Lee got EDC’s consolation.

Their Surrey rivals did all they could do to keep in touch, dispatching Richmond FC Hibernian 3-1 thanks to an Azad Palani hat-trick, with Connor Radil getting the reply for Richmond. The Horsemen do have a game in hand but are left needing Rovers Tigers to slip up to get back into the title picture. The problem for Pegasus for much of this season is that when Rovers Tigers do drop points, they’ve seldom been able to capitalise on it themselves.

With six games remaining, you have to look at this Saturday’s match up at high scoring Rino’s Tigers as one of the banana skins for the leaders on their road to the championship.

Rino’s have been in excellent form in recent weeks after bolstering their squad with a slew of talent from UBC and SFU, banging the goals in left, right, and centre as they moved up to third in the table. We had them down as possible dark horse contenders for the title, but a couple of slips in recent games has hit them hard and Friday night’s 3-3 draw at West Van certainly didn’t help them in that regard. 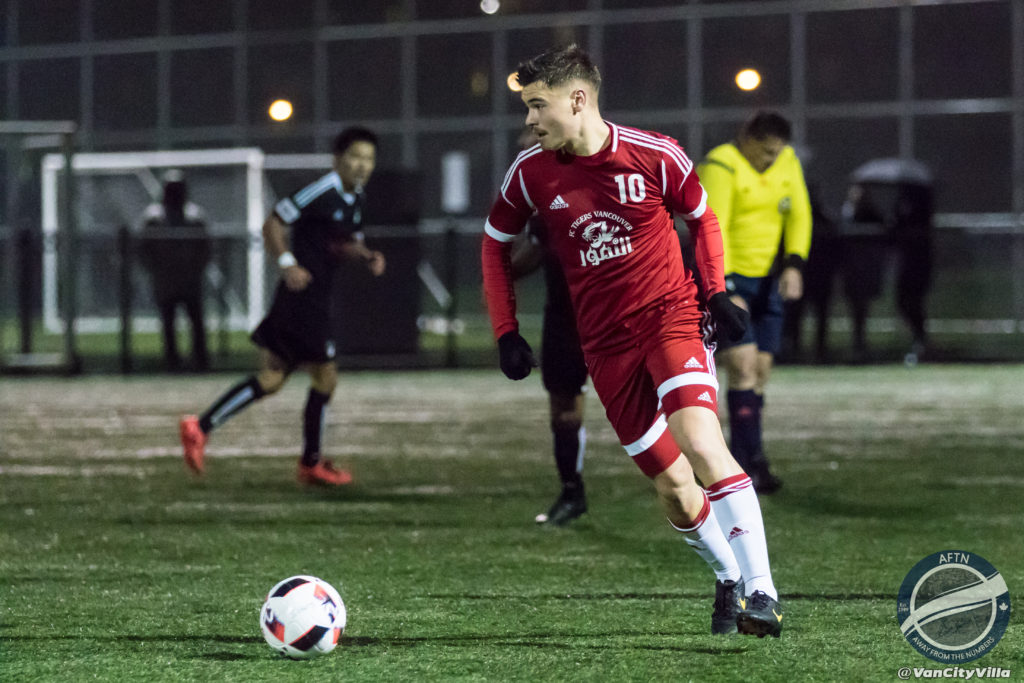 Goals from UBC and TSS Rovers striker Kristian Yli-Hietenan and SFU Clan’s Rookie of the Year Matteo Polisi (pictured above) , along with a West Van own goal, gave Rino’s the point in a match full of controversial moments that saw a Tigers effort look like it crossed the line before the keeper clawed it away, with no goal given, and Yli-Hietenan being carried off after being clattered in the box, with a free kick awarded right on the line instead of a penalty.

A couple of costly refereeing decisions for Rino’s for sure, but if they can get the win this week’s Match of the Week at Trillium on Saturday afternoon against the league leaders (kick off 4pm), then that would certainly liven up the championship race for the run-in.

Friday night’s other game saw Croatia SC move into a share of third place after Golden Boot leader David Malamura hit this 14th goal of the season to give them a 1-0 win at home to Westside.

Saturday’s battle of the mid-table teams saw Coquitlam Metro Ford Wolves’ revival continue with a 2-1 win at Club Inter at Memorial Turf, in a match that could have big implications for the current Provincial Cup champions of Inter.

A brace from Carlo Basso gave Metro Ford the three points, with Dzenann Bezdrob getting the goal for Inter. Coquitlam’s win moves them into a three way tie for 5th spot with Inter and West Van on 25 points, five behind Rino’s and Croatia. With the VMSL only getting six spots in this year’s BC Soccer Provincial A Cup, at least one of those sides will miss out (depending on who wins the Imperial Cup).

As that drama plays out in the top half of the table, the bottom half is firmly entrenched in a relegation battle, and new boys Campo Atletico took giant strides to stay above the drop zone with a hard fought, come from behind 3-2 win at home to fellow strugglers CCB LFC United on Saturday. 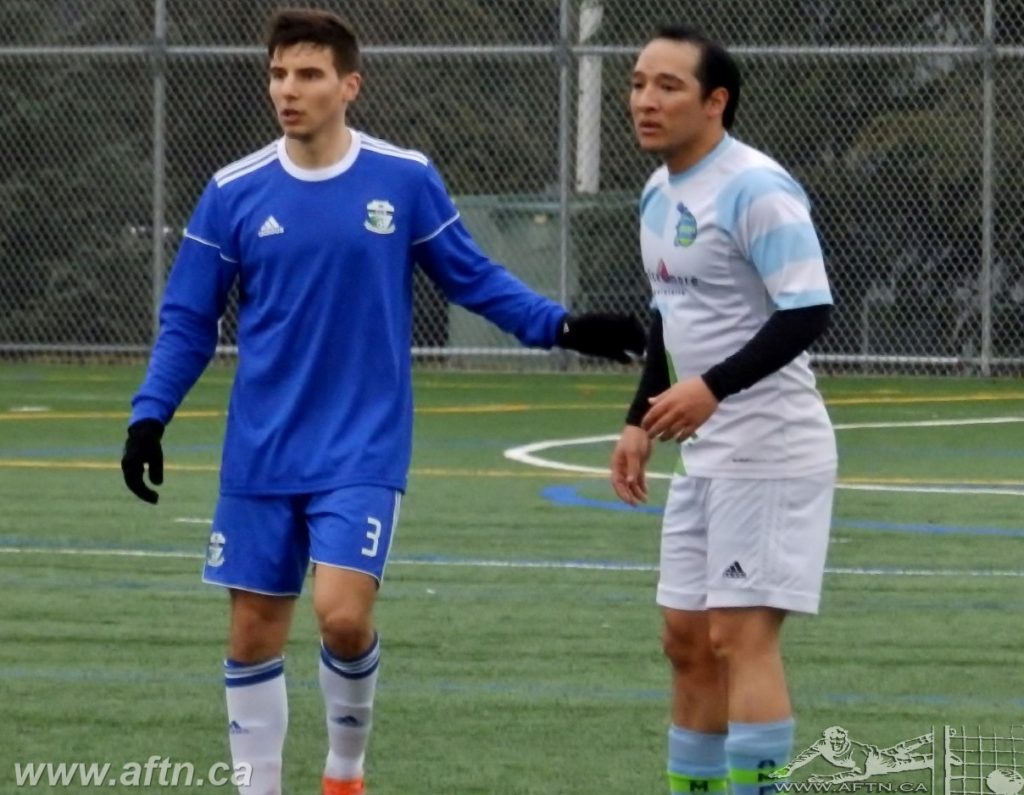 CCB look adrift at the foot of the Premier table, needing every point they can muster to avoid relegation, but having not taken any on the road this season, a tough task awaited them. They seemed up for it though and shocked the home side early through SFU’s Mamadi Camara. A header from Cameron Miller got Campo back on level terms as half time approached but CCB shocked them again moments later to re-take the lead when Andy Phillips got on the end of a corner.

As the home side pushed to start the second half, 18-year-old Cristian Villatoro grabbed his third of the season on the hour mark to bring Campo back level, pouncing on a loose ball in the six yard box, before Santiago Sanchez (pictured above with former WFC2 player Chris Serban) grabbed the winner eight minutes later when he beat the CCB keeper to a hopeful punt in the box to head home.

Both sides could have added to the scoring in the final 20 minutes, but neither did, and Campo held on for a massive three points that moved them up to eighth and four points clear of the drop zone.

Those results leave the VMSL standings as follows, with the majority of teams having six matches remaining. 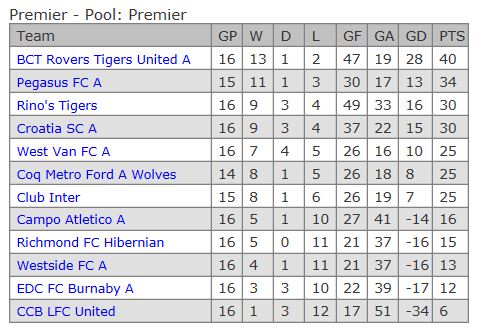 The Division 1 promotion battle has become a lot more clear cut in recent weeks. The one constant though has been the form of leaders NVFC Norvan Lions, who remain unbeaten after 16 matches, with just one draw stopping them from being perfect so far this season.

Norvan have an 11 point lead at the top of the table and need just eight more from their remaining six matches to clinch the championship and a place in the top flight following their 4-0 win at GN Sporting Club on Friday night.

The second promotion spot now looks to be a two team battle between ICSF Columbus and Guildford FC.

Columbus occupy second place on their own right now, as they look to return to the Premier Division at the first attempt. An entertaining 2-2 draw at Metro Athletic FC Burnaby on Friday night gave them what could be a crucial point and maintained their five point lead over the Burnaby side, who sit in fourth, and likely dealt a death blow to their opponent’s hopes of a third consecutive promotion.

Guildford sit in third, three points of the promotion place, but with a game in hand, after disposing of Burnaby Selects White Eagles 4-1 on Friday night.

Here’s a look at the lie of the land in Division One with six matches remaining. 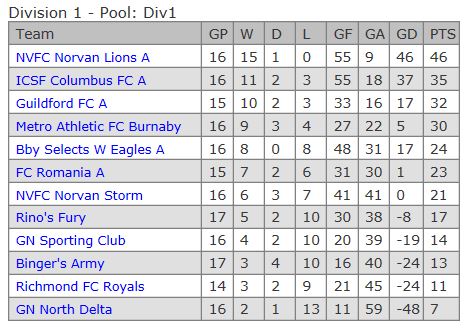 There’s some cracking matches in store this coming weekend across all the divisions. Check out vmslsoccer.com for the full fixture list, results, and standings. You can also find some excellent photos of recent matches on the VMSL Facebook page.