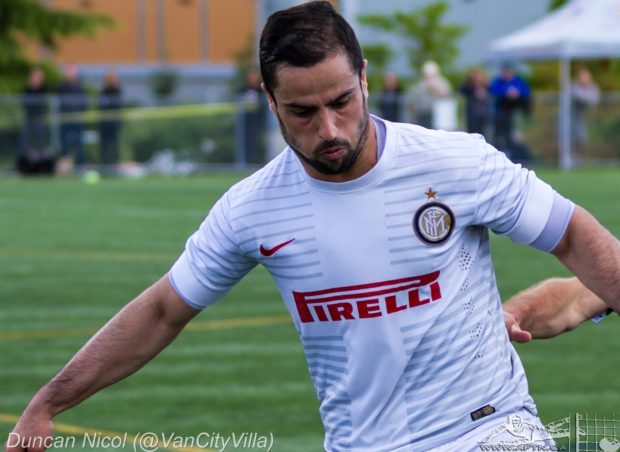 Only two teams still have 100% records in the VMSL Premier Division after the second weekend of action.

BCT Rovers Tigers United still lead the way at the top of the table following a narrow 1-0 win at West Van FC at Ambleside on Friday night. Chetan Jhooty grabbed his second goal in as many games to give them the win, and already looks like being a key acquisition for them after joining from Pegasus in the offseason.

Just behind them on goals are Westside FC, who came away with a narrow away win of their own on Saturday afternoon at Burnaby Lake. A brace from Byunghan Im saw Westside through 2-1 over Campo Atletico, with Matias Guedes responding for the newly promoted side.

Pegasus and EDC FC Burnaby are the other two undefeated sides in the division after the first two rounds of matches, both of them sitting on four points.

The Horsemen found their shooting boots at home to last season’s Division 1 champions Rino’s Tigers in Surrey on Friday night, coming away with a 4-1 victory. EDC Burnaby, who had drawn with Pegasus in the first week of action, won at Croatia SC on Friday night by the same scoreline.

Normal service was restored for back to back VMSL champs Coquitlam Metro Ford Wolves in Richmond on Friday night. A brace from last season’s Golden Boot winner Carlo Basso, and a single from Lucas Krivak, gave Metro Ford a 3-1 win over the Hibernian lads. Matteo Serka got the only goal for the home side.

With the nationals just a couple of weeks away, BC Provincial Cup champions Club Inter found some much needed form after last week’s 6-2 opening day drubbing by BCT Rovers Tigers United. Milad Mehrabi (main picture) grabbed a hat trick, and Liam Miller added another, as they thrashed CCB LFC United 4-0. CCB are still searching for their first goal of the new season. 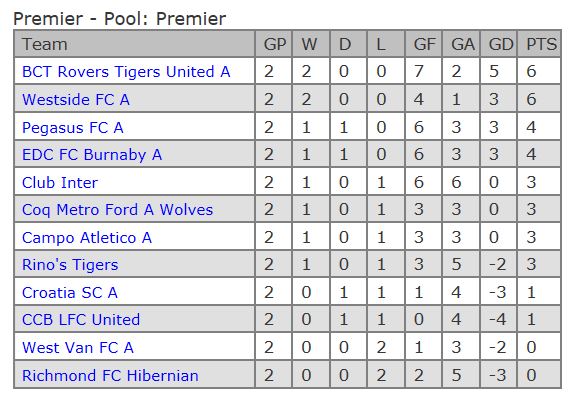 It’s been a fantastic few days for newly promoted Burnaby Selects White Eagles in Division 1, who bounced back from an opening 2-1 defeat to fire home 12 unanswered goals in two matches over four days to claim first place in the table.

The White Eagles started their routs with a 7-0 home thrashing of NVFC Norvan Storm on Sunday and they followed that up on Wednesday night with a 5-0 win at Binger’s Army. Vuk Erbez hit four goals over the two games, Kento Kurata three, with Matlash Vladyslav and Mico Rakita hitting two apiece.

Those wins sees lead the way on six points and goals scored, but having played a game more than the chasing pack.

Behind them sit five unbeaten teams – Guildford FC, Burnaby Metro Athletic, NVFC Norvan Lions, ICSF Columbus, and GN Sporting Club. The first three of which have been banging the goals in so far this season, and looking strong defensively at the other end. There’s going to be some cracking football ahead in the division again this season.

Here’s how the table looks after the first two week’s of action. 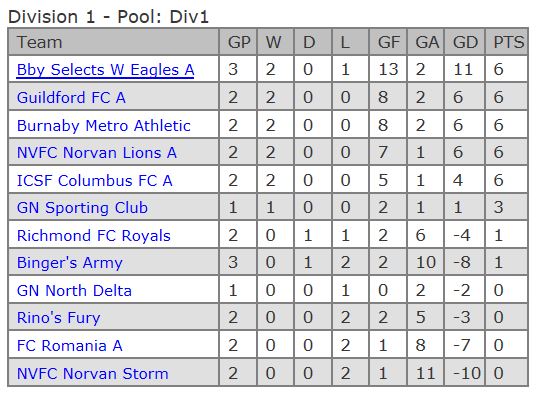