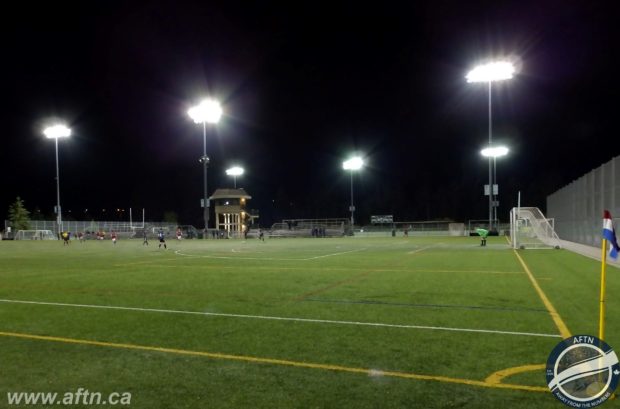 Amazingly only two VMSL Premier Division matches fell to the weather last weekend, despite the snow and bitterly cold conditions for players and spectators alike.

The four matches that were played saw both the goals and cards fly, with 21 goals scored across the games and some hot heads prevalent in the chilly air.

The ‘Match of the Week’ took place at Burnaby Lake on Friday night and it ended up throwing the title race wide open again with two matches remaining for most teams.

Leaders CCB LFC United headed to Burnaby to take on a Croatia SC side sitting five points behind them in the standings. A win would have seen the Surrey side open up a six point gap over their closest rivals with just two games remaining, securing a Championship playoff match at the very least.

But things certainly did not go according to plan for CCB, who saw their 12 match unbeaten run (which had seen 11 wins) come to a crashing end, going down to a 2-0 defeat and seeing four of their players sent off in the process as tempers flared.

With minus temperatures at kick off, and with a wind chill taking it down even further, we shat out of going to this one so missed capturing all of the drama on camera, which is probably a good thing for CCB based on some other incidents this season!

The gave sprung to life after a goalless first half with two goals in three minutes from Croatia’s Malamura brothers. David struck first in the 53rd minute directly from a corner, although he may have had the help of a deflection on the way, and then turned provider in the 56th minute, sending a ball to the back post that his brother Mark put away.

Croatia deserved to be in front but then the action really started as CCB started to unravel. Bobby Jhutty saw a red card a minute after Croatia doubled their lead after picking up a second yellow, sparking uproar from the CCB bench, who felt aggrieved after only a yellow had been given after Milad Mehrabi had previously taken cleats to the face and needed treatment afterwards.

A lengthy delay then follows as the CCB bench got into it with the officials, with Ajeet Bains and Arash Shirazi sent off from the sidelines for “offensive language”.

Things finally calmed down, only to flare up once again in the 71st minute when recent CCB addition Raphael Reynolds was sent off for a second yellow.

That wasn’t the end as we’ve been told that CCB asked the linesman to just call the game shortly after due to the result and conditions but the referee refused, although we’ve not had any official confirmation of that.

So an action packed match that still sees CCB out at the top of the standings, but their lead has now been reduced to two points over second placed Croatia SC, with only two league games remaining for both. Rino’s Tigers and West Van FC (who were meant to meet at Ambleside last weekend but that match was called off due to the snow) are also nicely poised three points back, so it should be a fantastic run-in.

CCB are still firmly in pole position to win the title and finish their season with two home matches, taking on Pegasus SFC (Feb 22) and then rounding off their campaign against Club Inter EDC Burnaby (Mar 8). Two wins and the Championship is theirs. Croatia take on Rino’s Tigers at Trillium next Saturday, in what could be a cracker, and then also finish their season against Inter, this time on March 2nd.

What makes these matches particularly interesting is the role that Inter have to play in them, as they need points right now.

Inter are currently sitting in 7th in the standings and in danger of missing out on the Provincial Cup. The top four VMSL teams get a berth in the Provincials, along with the two Imperial Cup finalists. If the latter are two of those top four then the 5th and maybe 6th placed VMSL sides will get a spot.

Inter have three matches remaining, as do defending Provincial Cup champions BCT Rovers Tigers United, who are two points ahead of them in 6th. Depending on how the Cup goes for both, this battle could go down to the wire and Inter will be highly motivated to get points against both CCB and Croatia.

Rovers Tigers have put themselves in a hole they are currently trying to get out of if they are to advance to defend their Provincial crown. The Surrey side are also defending Premier Division champions but have now gone five league matches without a win, with four of them defeats.

The latest of those came on Friday night at Newton when they went down to a surprising 4-3 home loss to NVFC Norvan. The first half ebbed and flowed in that one, with Nick Soolsma putting Rovers Tigers ahead in the 14th minute, only for Connor Dennehy to level for Norvan in the 28th minute.

Ryan Dhillon put Rovers Tigers ahead again four minutes later, but that was immediately cancelled out by Blake Burgon. Cam Hundal then put the Surrey side 3-2 ahead seven minutes before the interval and that was how things stayed until a minute past the hour mark when Norvan tied things up for a third time, this time through Stefan Colbow.

Norvan went ahead for the first time in the match in the 69th minute when Anthony Paiero found the back of the net, and this time that was how things finished, leaving Rovers Tigers with a huge three points lost.

Friday’s other Premier match also took place at Newton with Pegasus SFC running out comfortable 4-1 winners over the aforementioned Club Inter EDC Burnaby. Rizal Ganief had actually put Inter in front on the half hour mark, but it all quickly went downhill for them from there. Chetan Jhooty levelled things up just two minutes later, with UBC man Kerman Pannu putting the Horsemen in front in the 56th minute. Goals in the final ten minutes from Azad Palani and Shabaz Khattra secured the three points and spoiled Inter’s chance of leapfrogging Rovers Tigers in the standings.

The last Premier match that was able to be played last weekend also took place up at Newton, this time on Saturday night. The big winners, in a couple of ways, from this one were Guildford FC. A first half brace from Gurinder Pannu and a second half brace from Dipinder Gill helped the Surrey side to a 6-1 victory over already relegated Campo Atletico. Indervir Gill and Denis Ananga got Guildford’s other goals, with Joao Herrera Ramalho getting a 75th minute consolation for Campo to round off the scoring.

That win, along with Richmond FC Hibernian seemingly deducted three points, secures Guildford’s spot in the Premier Division for next season with two matches remaining and sounds the death knell for Richmond, who will now go down to Division 1 next season along with Campo.

So after all that action, the VMSL Premier Division standings look as follows: 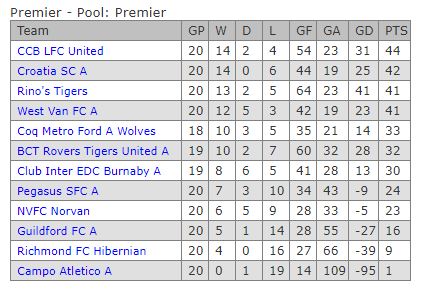 And talking of Division 1, the top two played out a 1-1 draw at Burnaby Lake on Friday night. That keeps Burnaby Selects White Eagles out on top with 44 points, three ahead of ICSF Columbus in second place. Both those teams have two league games remaining, but that draw now opens up the door for Burnaby Metro Athletic FC, who are in third place on 39 points but have three games left to play, the next one of which is against the White Eagles. So another exciting run-in is on the cards here.

The league action is on hold this weekend, not due to the snow, but due to the Round of 16 in the Imperial Cup. Well, depending on the weather.

Eight matches were scheduled over Friday, Saturday, and Sunday at the time of writing this (Friday lunchtime), only two of them have so far fallen foul of the weather, both of them at Newton (CCB LFC United v NVFC Norvan and BCT Rovers Tigers United v ICSF Columbus).

Should be some good games in there and we hope to make it out to a couple of them. Check the VMSLsoccer.com website though to make sure the games are still on if you do plan on heading out, and also for all the latest results and standings across all seven VMSL divisions. And don’t forget to check out the Take The Piss forums for all your local football banter and Canucks4Ever’s weekly match previews and predictions.