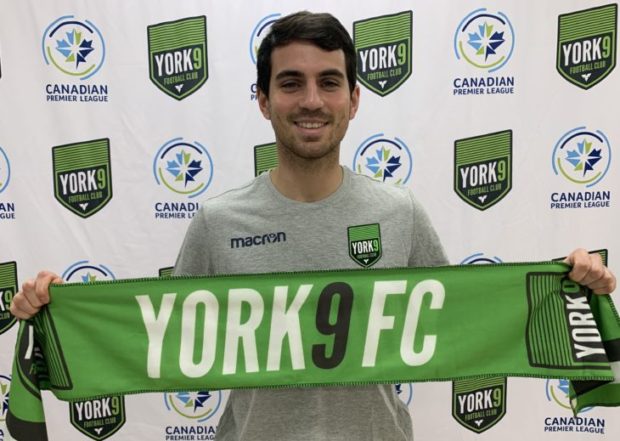 In Woodbridge, Ontario in late January, I was lucky enough to sit down with three York 9 players at a meet and greet set up to allow the fans some of their first access to players and coaches. After interviewing Joseph Di Chiara, Roger Thompson, and Cyrus Rollocks there, it was clear high expectations have been set in the locker room ahead of the inaugural Canadian Premier League season.

As the rosters continue to fill out and the CPL clubs get close to the outset of their training camps, York 9 are feeling like they have the players who can bring in a strong leadership core to the club. Both Di Chiara and Thompson expect to find themselves in the kind of position where the younger players are looking up to them, and both are eager to take on that responsibility.

“Without a doubt,” Di Chiara told AFTN without missing a beat, when asked if he saw himself as a leader on this squad. “I have a lot of knowledge, been in a few countries throughout the world, and I’ll bring back a lot of soccer IQ, and for sure a huge leadership role. I’m sure Jimmy [Brennan] will expect that. As well as the other coaches, [who] will expect that of me.”

Di Chiara’s extensive European experience, as well as his age (he’s 27), makes him a prime candidate to take charge with a club that is starting from scratch. But there will be a few leaders expected to step up, Thompson added, when asked the same question.

“Yeah for sure, for sure,” Thompson told us. “Me and Kyle Porter, two of the older guys on the team, have both been playing at a high level. So you know, even starting now we are trying to push the guys in training to get them to work as hard as possible.”

We can expect York 9 to be a hungry and tenacious team as the season opener in Hamilton inches closer. We can also expect incoming Japanese midfielder Wataru Murofushi to be a part of that core. Murofushi is coming off an undefeated season in Singapore where he captained Albirex Niigata Singapore FC to four domestic trophies. 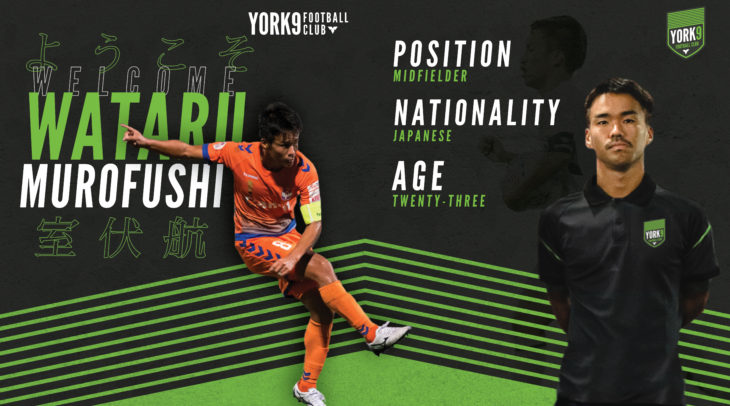 You only have to spend a small amount of time speaking with these players to clearly know that there have already been a few goals set in the York 9 dressing room. Whether talking about team or personal goals for the season, both Thompson and Di Chiara were quick to mention the ultimate prize, the inaugural CPL Championship.

“I’ll start with the team,” Di Chiara stated. “We want to win. It won’t be a successful season if we don’t win the championship. I mean, for me, getting in every game, scoring lots of goals, getting lots of assists, you know just helping the team in any way I can to get the ultimate prize, which is winning.

“We want to win the first championship, and if we don’t then that won’t be a success. We have a good group, we have more than enough talent to get that done.”

There is a belief in the locker room that Manager Jim Brennan has built a squad that can compete at this level and Thompson echoed that mentality.

“For myself, coming back home and helping York 9, as best I can, to win the league,” Thompson said of his primary goals for the season. “My job as a defender, as a leader at the back, is to keep clean sheets. The more clean sheets I can keep the better my team has a chance to the win the game right? We can win games 1-0, as long as we keep a clean sheet at the back and not let goals in.”

It’s likely the same mantra across all seven teams in the fledgling league, but anything less than a title will be a disappointment in the eyes of York’s new team.

When it comes to goals, both on the pitch and aspirational, York 9 striker Cyrus Rollocks also displayed his eagerness for the season to begin. 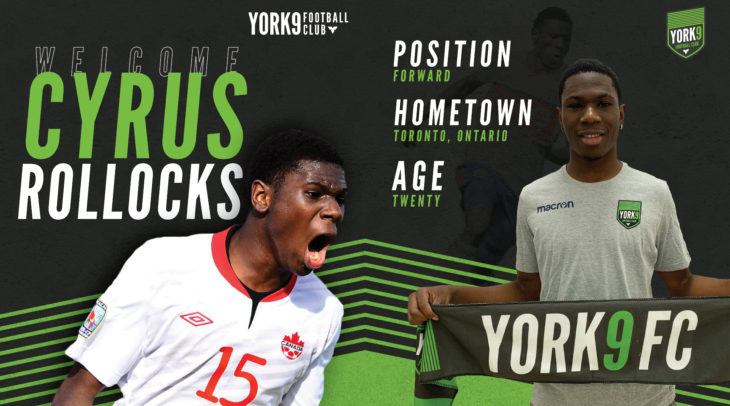 The former TFC Academy prospect cut ties with the MLS side in order to take the chance at his first professional opportunity.

“As a striker, I’m more attacking,” Rollocks told us about what he expects to bring to the York 9 squad this season. “I’m not much of a hold up striker. I like to go 1-v-1 with defenders, centre backs, left backs, regardless. I feel like my pace is just unbelievable, so to stop me is kinda hard right?”

Rollocks is confident that if rewarded with minutes, he should be a dangerous attacking option at this level.

“My personal goals are that I want to be the top goal scorer of the league,” Rollocks stated. “First, I’m going to go with the team, then I’m going go with the league. And I want to get the Rookie of the Year. So I’m hoping I can get my minutes in, and I’m just hoping I do my work from there.”

The 21 year old attacker, who won L1O’s Player of the Year in 2017 will certainly be one to keep tabs on, regardless of if you are a York fan or not.

And when it comes to keeping tabs, many CPL players are going to be eager to see what happens with the Canadian national team set up in the next several years.

National team manager John Herdman cut a confident figure recently when speaking about Canada will qualifying for the 2022 World Cup in Qatar. He also stated his excitement to keep an eye on how the CPL players are performing.

Roger Thompson has previously represented Canada at the U20 level. He’s been playing his football over in Europe since 2012 in Finland, Germany, and Sweden, but now that the 27-year-old has returned home, was any part of that decision in the back of his head focused on turning out performances good enough to get back into the national team set up?

“Yeah, I mean, you always want to represent your country right?” Thompson said. “I represented Canada last at the U-20 level. I was playing with Jonathan Osorio, Ashton Morgan, Doneil Henry and Russell Teibert from the Whitecaps. All these guys I played with, so I know I’m good enough. It’s just a matter of coming back home, showcasing myself, doing well in the league, and I’m sure the opportunity will come.”