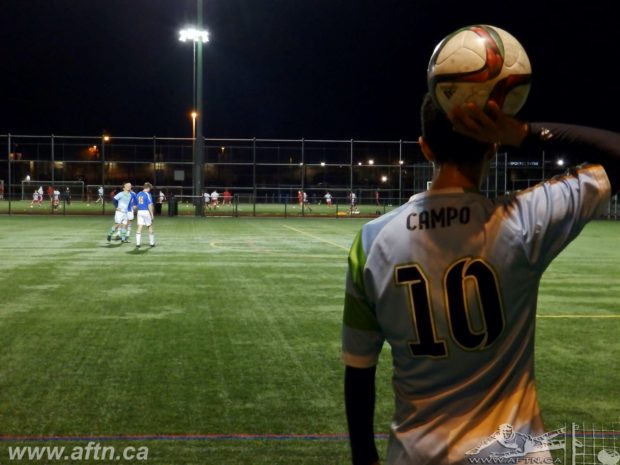 The 2016/17 VMSL season is almost done. More than two months later than usual, and there’s still one relegation and one promotion battle to be finalized, but most teams now know their fate after what’s been an entertaining season of action.

There’s one game left to be played in the VMSL Premier. That takes place tonight between Pegasus and Pacific United, but it means not a jot to anything.

Coquitlam Metro Ford Wolves had wrapped up back to back Premier titles weeks ago, although it felt that they had it won by about November. They lost two of their last three matches, so it’s hard to say if they were taking things a bit easier ahead of the Provincial Cup with some squad rotation, or if they’ve hit a bit of a lull, but with only three defeats on the whole season.

They finished with a 4-2 win over relegated North Delta SC on Tuesday night, to romp away with the title by 14 points. Former SFU Clan standout Carlo Basso grabbed a brace in the victory, securing the Golden Boot with 28 goals. Fantastic season from the big man.

With North Delta and ICSF Columbus’ relegation also confirmed weeks ago, placings were the name of the game heading into the last round of Premier matches, with two Provincial Cup spots up for grabs and three teams battling to secure them.

Westside FC and Richmond Hibernian had their fate in their own hands, needing to only win their last games on Friday night to get in. Westside could only draw 1-1 at Rovers Tigers United, while Richmond crashed to 4-1 defeat at home to Croatia SC. That allowed Club Inter to leapfrog above both teams with a fantastic 1-0 win at the champions in Coquitlam.

A great win for Inter who knew what they needed to do and got it done. That set up a playoff game between Westside and Richmond for the final Provincial Cup place, with both teams tied on 33 points in the standings. 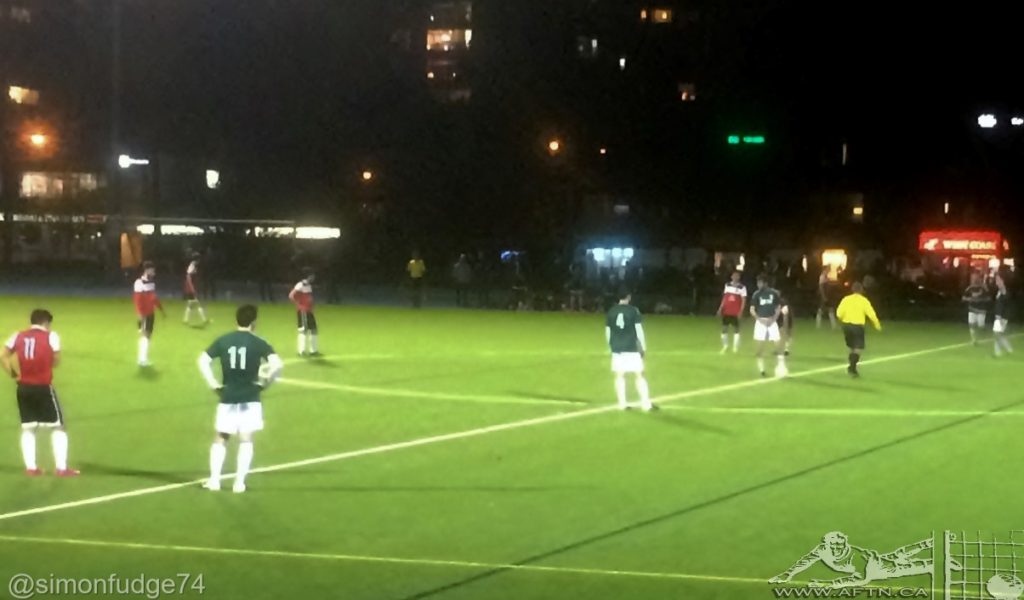 That game took place at Point Grey on Wednesday night, and with so much on it the line, it was a cracker (even if the photo above may not fully convey that, but it was taken from our good friend Simon Fudge’s phone, and is better than nothing at all!).

It was an entertaining game that could have gone either way. Westside took the lead before being pegged back and the teams headed in level at half time. Westside looked to be home and dry when they went 3-1 up but Richmond pulled one back just past the hour mark. The Hibs pushed hard for the equaliser, and had their chances, but Westside saw it out for the 3-2 win and claim that last spot in the BC Provincial A Cup.

The draw for all the BC Provincial Cups will take place tonight at 7pm. You can follow along live on BC Soccer’s Facebook page.

In VMSL Division 1, Rino’s Tigers secured both promotion and the title a few weeks back and finished the season with a six point lead at the top, after stuttering over the line at times these past few games.

The second promotion spot and the relegation place were still up for grabs over the last few matches and what an end of season of twists it turned out to be.

Rino’s Fury were occupying second place on 33 points following their 3-2 win over GN Sporting Club on Sunday evening. The Fury were highly unlikely to be able to take a place in the Premier next season due to a no two teams from the same club affiliation rule, so that still left Campo Atletico and NVFC Norvan Lions in with a shot at promotion if they won their last match.

Both teams were sitting on 31 points heading into Tuesday’s games. If both sides won, there would be a promotion playoff, but automatic promotion would be secured if one team won and one dropped any points.

Campo Atletico kicked off their game against FC Romania at Burnaby Lake at 8.30pm on Tuesday night, half an hour before Norvan Lions took on South Delta Royals. 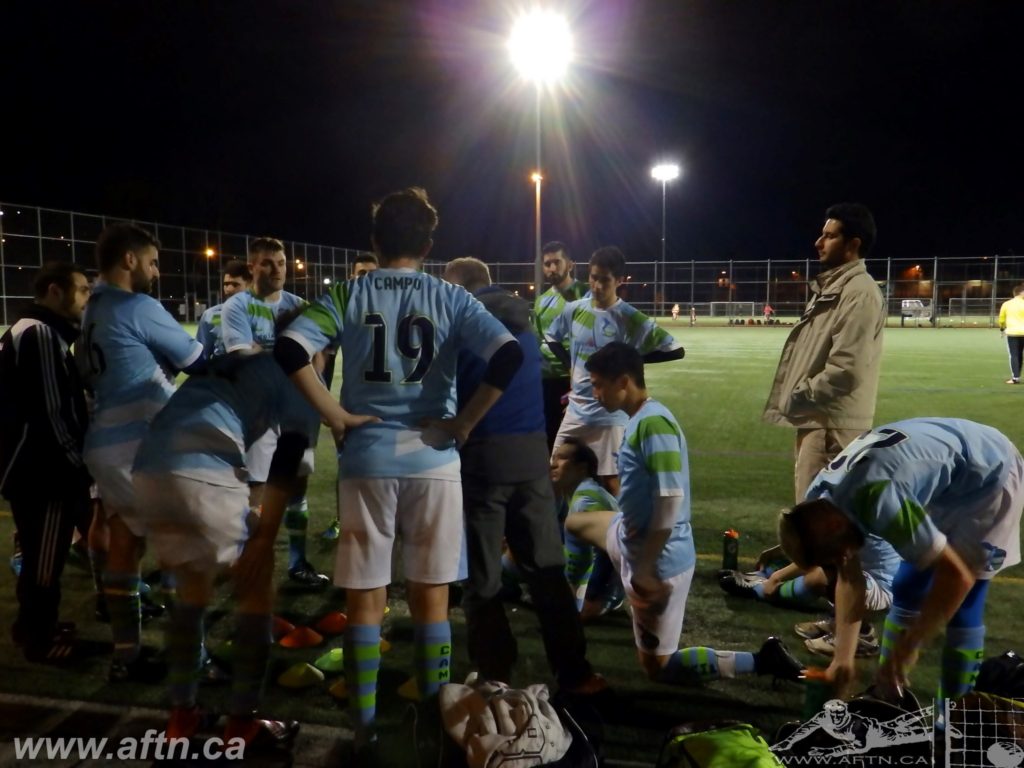 Santiago Sanchez set Campo on their way in the 13th minute, after being put clear on the right and coolly slotting past the Romania keeper. Campo dominated the early going but after the goal they seemed to sit back a little, allowing Romania to control the game and have a couple of chances of their own.

Campo held firm at the back and almost grabbed a second before half time when the keeper turned a shot around the post.

The second goal came around the hour mark when Edson Castro showed nice footwork out left to cut inside and set up Ivan Colin inside the box, who made room and curled a low one past the keeper for 2-0.

Castro made it three himself with ten minutes to go, heading home a free kick in from the left to complete the scoring and give Campo a 3-0 victory.

You can see all three of Campo’s goals, and some other highlights from the match, in our video below.

The win moved Campo into sole second place in the table, guaranteeing them at least a playoff promotion game depending on the Norvan Lions result.

That match kicked off in Tsawwassen half an hour after the Campo game and had implications at both end of the table, with South Delta Royals needing a win to avoid relegation.

The home side shot out to a 2-0 lead, but when Norvan pulled one back in the final ten minutes that set up a barnstorming finish.

The Lions couldn’t find the two further goals they required, and South Delta pulled off the 2-1 victory that ended Norvan’s promotion hopes and secured their own Division 1 safety, sending down Metropolitan, along with the now defunct Akal FC.

Huge congratulations to the Campo guys, who are also on the look out for a new coach after parting ways with the colourful Eduardo Azmitia towards the end of the season. Campo only earned their spot in Division 1 after a vacant spot arose, so to go on and secure promotion at the first attempt was a massive achievement for the reigning Provincial B Cup champs.

We’ve enjoyed watching their games these past two seasons and look forward to seeing what they can do in the Premier now.

A nine game unbeaten run to end the season, which included a six game winning streak, saw Burnaby Metro Athletic achieve back to back promotions as those around them faded under the weight of games caused by the snow backlog.

The Burnaby side ended up winning Division 2A by seven points over 13th Legion, with former Whitecap and UBC Thunderbird Navid Mashinchi leading the scoring in their division on 15 goals.

And it was another Burnaby side who ended up winning Division 2B.

Burnaby Selects White Eagles headed into their final match against VUFC Rangers knowing a win would see them crowned champs over NVFC Norvan Storm, who had three games in hand on them. 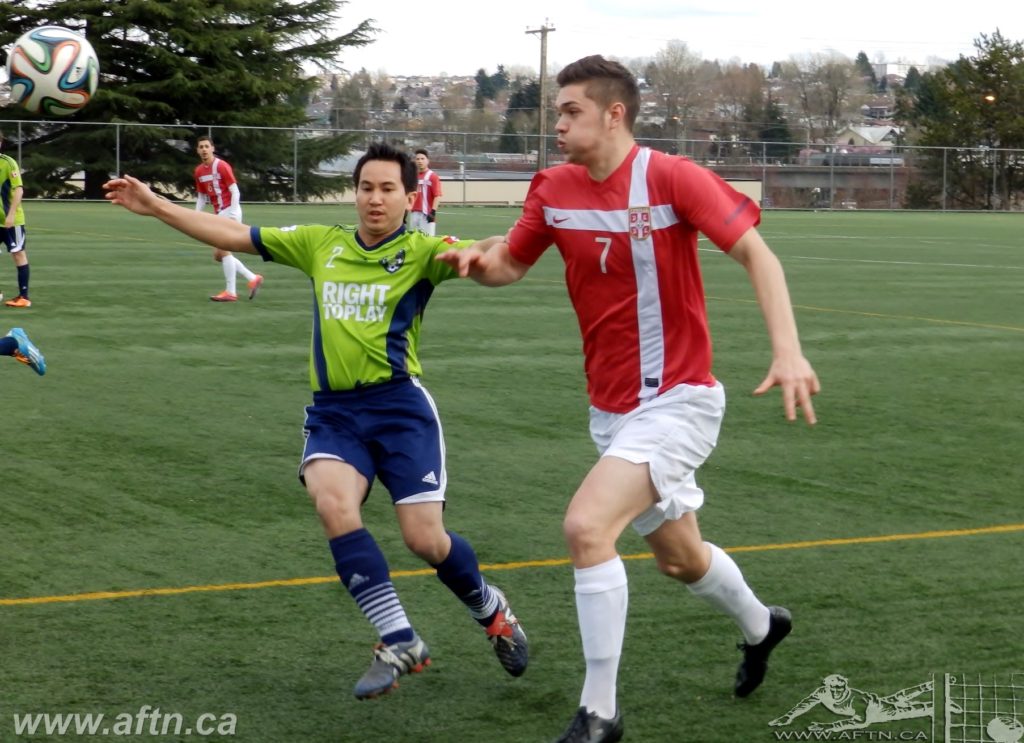 It was a hard hitting encounter from the kick off, with Vancouver United losing a player to injury in the opening minutes after a crunching tackle.

The White Eagles looked the more dangerous side on the Van Tech turf, but the sides headed in scoreless at the half. But when the Burnaby side took the lead on the hour mark, with a nice swerving long range strike that the keeper should have done better on, you felt that was pretty much going to be that.

A header from a corner and a neat back post finish shot the White Eagles out to a 3-0 lead, and although Vancouver United pulled one back with a nice chipped effort from the edge of the box, there was no way back for them.

You can see (most of) all the goals from the match in our video below. We’ll work on the auto focus on our camera for next season. Or lack of it!

The win secured the Division 2B title for the White Eagles. NVFC Norvan Storm can close the gap to just a single point if they win their three remaining games. Scant consolation I know.

At the other end of the table, Vancouver United are still in a relegation playoff dogfight with Unicorns FC. Both teams have two matches remaining, so that one’s going right down to the wire and who knows when their seasons will eventually finish.

We also still have to wait to crown the Division 3B champions. Royal City SC have already won Division 3A, and Coquitlam Metro Ford Lupi ended the league season unbeaten to clinch Division 3C, but it’s still a two horse race for the last pool title.

That battle is between Bosna SC and Cliff Senior Cobra, and Bosna hold the massive advantage, having finished their season and currently sitting on top of the table on 43 points, six points ahead of Cliff, who have two games left to play.

The two teams met in a fiery encounter at Burnaby Lake on Saturday night that saw four goals, three sending offs, two players carried off, and nothing firmly decided. 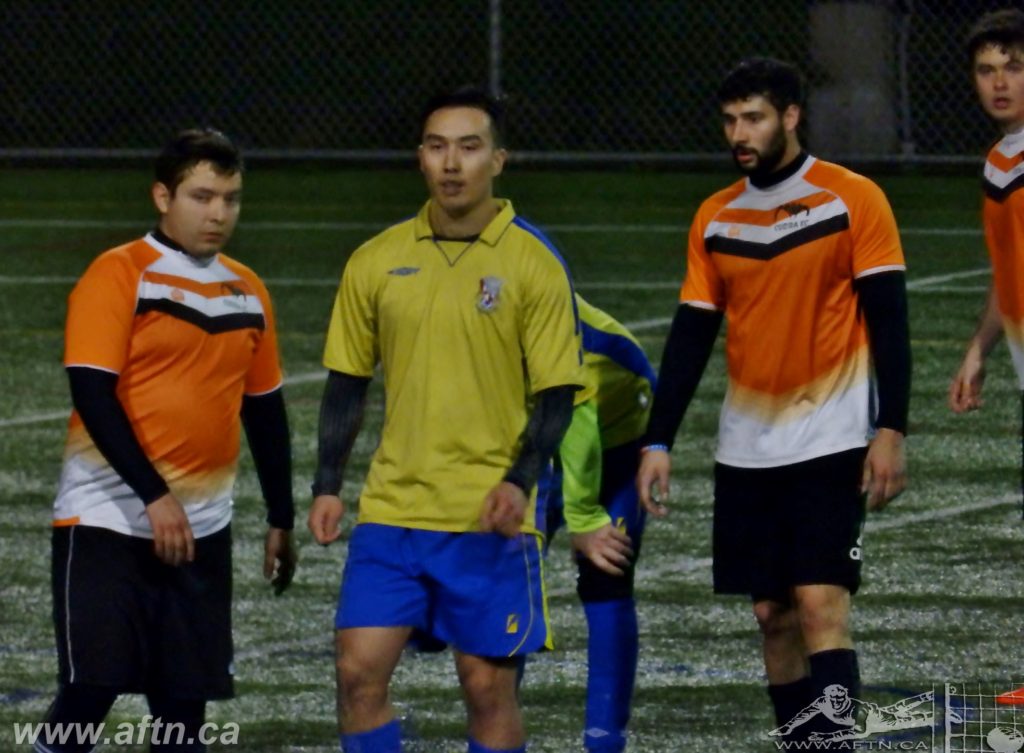 In a first half that saw both sides reduced to ten men, Bosna raced out to a 3-0 lead by the break. Pretty much game over, but Cliff fought back, reducing the deficit to two, before going down to nine men following another straight red tackle.

They tried valiantly to still get something going but it wasn’t to be, but they can still tie Bosna at the top if they win their last two remaining games against Marpole Vancouver Tropics on Saturday (2pm at Burnaby Lake) and Cosmos FC the following weekend.

After the feistiness of last weekend’s match, I’m kind of hoping they do force that playoff game as it should be tasty!

We’ll let you know the outcomes of those issues still to be settled when we bring you our Provincial Cup coverage over the next six weeks.

This has been our first season providing coverage of the VMSL on AFTN and we’ve thoroughly enjoyed it and getting out to these matches. We hope you have to. We’ve been surprised by how many of you are reading our round-ups and watching our videos every week, so many thanks for that. We feel it’s important to bring the grassroots game to a wider audience and hopefully get others to enjoy our passion. We have plans to expand the coverage even more for next season, so stay tuned!

In the meantime, we can’t wait for the Provincial Cup to start. It’s one of our favourite times of the footballing year.