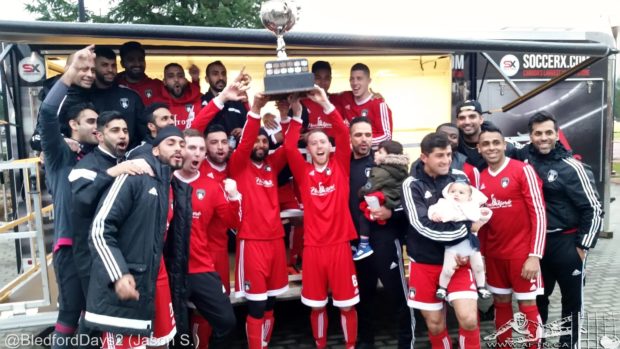 The heavily weather disrupted VMSL 2016/17 season is finally coming to an end. A lot of the promotion and relegation battles have been settled, but there’s still a lot left to play for in some of the divisions and with the BC Provincial Cups kicking off later this month.

What is usually the season-ending All Cups Day took place this past weekend at Coquitlam’s Percy Perry Stadium, crowning champions in the Imperial Cup, Division 2 Cup, U21 Cup, and the Masters A and B competitions.

Coquitlam Metro Ford Wolves headed into the Imperial Cup final looking for back to back League and Cup winning seasons, having wrapped up the VMSL Premier Division at a canter. Their match up with Pegasus FC was a repeat of last year’s final and last season’s BC Provincial Cup final, the latter of which the Horsemen won to prevent Coquitlam winning the treble.

And it may just be that Pegasus have CMF’s number now in cup competitions, with a Chetan Jhooty goal giving them a 1-0 win to deny the Wolves another double.

Pegasus have slipped to 7th in the Premier standings two games left to play, but their Cup win secures them a spot in the Provincial A Cup in the coming weeks, alongside league champs Coquitlam.

VMSL clubs make up seven of the 16 spots in the provincials. West Van FC, Rovers Tigers United, and Croatia SC have already booked their spots, leaving two up for grabs and three teams battling for them as we head into the last round of matches this weekend. 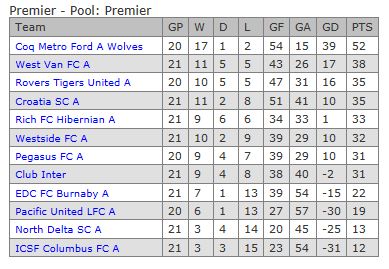 Richmond Hibernian and Westside FC are the favourites to grab them. Richmond currently sit fifth in the table on 33 points and will be at home to Croatia SC on Friday night. A win secures their Provincial Cup place, while a draw guarantees at least a playoff game for it. Westside, sixth on the table on 32 points, travel to Surrey the same night to face Rovers Tigers United, again needing a win to secure their spot.

Club Inter are on the outside looking in right now. Currently in eighth place in the table on 31 points, they face the tough task of trying to hand champions Coquitlam only their third defeat of the season on Friday. Even with that they still need either Richmond or Westside to slip up.

North Delta SC and ICSF Columbus both had their relegation fates sealed a couple of weeks ago.

In Division 1, champions Rino’s Tigers’ season is done, but the race to join them in the Premier next season is going all the way down to the wire.

Third placed NVFC Norvan Lions still have their promotion hopes in their own hands with two games left to play. If they win them both, they’re up. It’s as simple as that. But the North Vancouver side have made hard work of it in recent weeks, with just one win in their last five matches, taking only 5 points from an available 15.

Saturday afternoon could be crucial for the promotion race. Norvan travel to Newton to take on fourth placed CCB Guildford FC. If they win, they just need to beat bottom club South Delta Royals in their final game of the season in Tsawwassen on Friday to gain promotion.

If they lose on Saturday, the best Norvan can get is a playoff game, but then the advantage in the playoff race moves to second placed Campo Atletico. A Guildford win in their last game against Norvan would leave Campo with their fate in their own hands, needing to beat FC Romania at Burnaby Lake on Tuesday evening to claim back to back promotions and their first spot in the Premier.

At the other end of the table, Metropolitan’s battling 5-3 win over FC Romania on Tuesday night put the cat amongst the pigeons in the relegation battle. The win drew them level on points with Romania, who still have two games left to play. South Delta Royals now fill the one relegation spot (only one team goes down after Akal folded at the start of the season), but they also have two games left to play.

A fantastic end to the season. 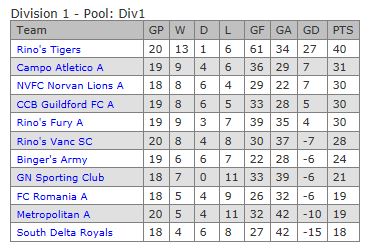 It could turn out to be a fantastic season for North Vancouver clubs. NVFC Norvan Storm won the Division 2 Cup on Saturday afternoon with a 1-0 win over Shaheen FC, the winning goal coming from a penalty seven minutes from time.

Norvan stormed through their cup run without conceding a goal, but between those matches and the weather, it now leaves them with five games still to play in Division 2B and promotion lies in their own hands.

Burnaby Selects White Eagles lead the way at the top on 44 points with one game left to play against a VUFC Rangers side battling to avoid a relegation playoff. Shaheen could still catch them if the Eagles lose their final game and they win their last two matches. Norvan Storm currently sit in fifth place in the division, ten points behind the leaders. Win their four games in hand and they lead by two points. Win all five remaining and they’re champions.

The crunch game could come on April 23rd when they travel to play Shaheen. Would be a fantastic match if everything’s on the line for that one, but with their cup exploits, and the Provincial B Cup coming up, prove too much to cope with all at once? Tough for them if it costs them promotion. It may have already cost Shaheen.

In Division 2A Burnaby Metro Athletic’s 5-1 win at Vancouver Strikers on Saturday saw them all but crowned champions. They need just one point from their last match on Monday at home to Sarajevo FC, or for 13th Legion to drop any points on Saturday at home to Astro FC, to achieve back to back promotions with a very talented squad. We saw a lot of their matches this season and we look forward to seeing some more now at the higher level. Congratulations to Royal City SC for winning Division 3A and Coquitlam Metro Ford Lupi for their comprehensive unbeaten march to the Division 3C championship. The 3B battle is still up for grabs though and it’s between Bosna SC and Cliff Senior Cobra.

Bosna sit top on 40 points with one game left to play. Cliff are three points behind in third but with two games in hand. The pair meet this Saturday at Burnaby Lake at 8pm. It’s worth getting out for.

And if you want to take in any of the games this weekend, you can find the full fixture list HERE.