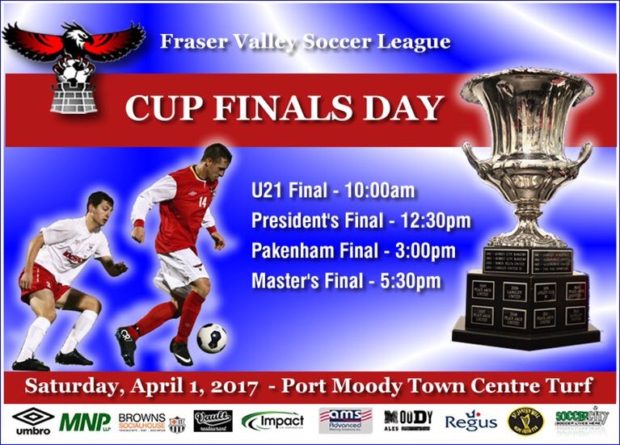 It was the Fraser Valley Soccer League’s Cup Final Day this past Saturday in Port Moody. A good crowd turned out for the matches, with five matches being contested over the afternoon.

As you’ll know, we’ve been bringing you VMSL coverage on AFTN this season, and we’re pleased to now bring you some FVSL coverage as well, thanks to President Dave Hleucka. Here’s his report of the day.

The first match of the day, The Neil Fuge U21 Cup, had newcomers FC Barca from Surrey taking on long time giants of the Division, Port Moody Gunners, lifting the Cup with a 4-2 victory.

FC Barca played like they’ve won before. Playing with a lead for nearly the entire match likely also helped, as did the sending off of Port Moody’s goalkeeper. The young Gunners never really got into this one and thus found themselves chasing the game far to long to really trouble their opponent. Barca sealed the match in the 50th minute, going up 3-1, putting a final nail in the Port Moody coffin in the 75th, going up 4-1. The Gunners happened to pull one back late, but at this point in the match it was to late to make the comeback real.

The goals came from an Imraj Brar brace, Prabhjot Mand, and Karandeep Sanghera for Barca, with Kaveer Brar and Jacob Mitchell replying for Port Moody. Imraj Brar was the Final MVP.

One of the best matches of the day with the club mates holding nothing back. If I were to best describe it, I would say it was a bit of old school football. Plenty of tasty tackles flying in with some so big that they were felt up in the beer gardens… no moaning, no complaints they just got up and got on with it, a real testament to the compete level of both sides.

The Blue Devils took the lead in the first half through Corey Reid and held it at 1-0 until the final 20 minutes before the Red Devils tied it up with a Matthew McKenzie goal. The game moved on to extra time and started with the same intensity as regulation.

Minutes into the first period of extra time, a Blue Devils player was shown his second yellow, resulting in him being sent off. The game then became frantic until its near conclusion, with the Reds pushing and the Blues holding. With seven minutes remaining the Red Devils decided to make a goalkeeper substitution, likely setting up for the impending penalties.

But with no more than one minute to go a ball fell perfectly to Reid on the left side, top of the 18 and he smashed one home off the inside of far post and in, setting off one of the largest air horn goal celebrations I’ve ever heard from the Blue Devils faithful. Fans also poured from their beer garden seats to the front fencing next to the goal to celebrate with the players. A terrific game and equally terrific support from both sides.

The feature Match of the Day, the Pakenham Cup, which was first played for in 1909, pitted Port Moody Gunners vs Port Moody Rangers. They share the same fields and club name, but make no bones about it, there was a fierce rivalry going on in a closely contested game that saw the Rangers run out 1-0 winners.

This was a game played at a very fast pace and featured plenty of strong tackles, but all within the spirit of the match. The game was even throughout, but the Gunners best chances and possession was maintained throughout the first half. A pair of near misses and a few half chances kept the Rangers on the back foot for the first 45. The second half started 0-0 but with the Rangers grabbing the game by the reigns, creating a number of their own chances leaving the Gunners lucky not to be trailing.

The game turned on it’s head in approximately the 75th minute as Reid Lamb, the benefactor of some great possession and play, picked up the ball at the top of the D and one timed a ball coming across his body, dipping and bending it into the corner. A strike and goal truly worthy of the Pakenham Cup final.

From there, all bets were off. The Gunners threw everything at the Rangers even thrashing one off the crossbar in the dying minutes, but the defence of Ash, Van de Vendal, Cadman, and Szostak did not break. Miguel Hof preserved the clean sheet for the Rangers for their first Pakenham Cup. It should be noted Chris Attadia and Graison Corney were all outstanding on the day for the Gunners, but it was the match winning Lamb who won the final MVP award.

The final scheduled match of the day was the Rob Brown Masters Cup, with Surrey Temple facing off against Coastal FC Peace Arch.

League contenders Temple defeated last seasons cup winners Coastal FC Peace Arch United in a, dare I say… a bit of a lacklustre affair. Neither side played particularly well in terms of possession and play but Temple worked tremendously hard on and off the ball. Coastal almost seemed disinterested at times, giving up possession often and sometimes cheaply. To Temple’s credit, their pressure was coming fast and caused many errant passes and turnovers.

All that said; Temple had a terrific final ten minutes to the first half creating several great chances. Peace Arch’s Ayi-Bonte turned away a couple of point blank efforts keeping it a game and frustrating Temple, that is, until finally a wicked corner kick was brilliantly headed into the net by Dave Morris from about eight yards out.

Literally moments later, from the kick off, Peace Arch get a free kick in Temple’s end. The kick is cleared and the counter attack was on. A quick ball spread wide, then into the middle, a quick turn followed by a majestic ball switched to the far left wing… a great individual run beating one Coastal defender and a low hard cut back cross right to the waiting foot of Morris four yards out. Just like that, in a matter of a minutes, Temple we’re strolling into half time with a two goal lead when the game looked destined to be mucked out.

The second half was much of the same. Peace Arch did have a good push late trying desperately to get one back. Their best chance was a looping through ball that bounced to Jas Atwal who cleverly chipped the ball over the onrushing goal keeper, only to see it agonizingly nick off the outside of the post and into touch. A flurry of corner kicks and shots from range all for nothing, as Temple held on to win. A spirited affair, played with class and sportsmanship from both. Dave Morris was named the final’s MVP.

A very entertaining and well played match which was tied 2-2 at full time, with the goals coming from Rory Gorton, Brian Noga, Reggie Reddy, and an own goal from Andy Appeldoorn.

After a few days to compose myself, reflect and analyse the tremendous number of positives from another successful FVSL Cup Finals Day, we find ourselves already making more plans to increase the success and improve the ever-growing attendance for 2018.

We would like to thank the Port Moody Soccer Club for their fourth successive hosting of our Cup Finals Day and with three teams from the club all vying cups they really pulled through for us… even a nod from the weather gods giving us some much needed sunshine for four of the day’s five matches.