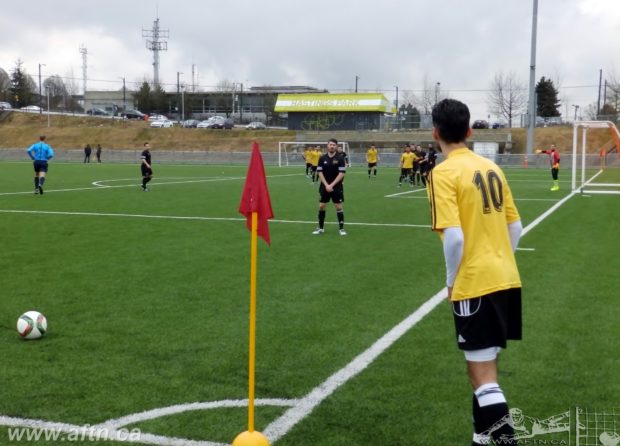 It’s been a while, we’ve missed it, but we’re back in the VMSL groove, taking in a couple of last weekend’s matches in both the league and the cup.

This is our first VMSL update since the start of December, as the snowpocalypse and our trip to the UK for the ‘Caps preseason took its toll. The snow’s really hit the VMSL schedule hard.

The league season should be over by now, with a focus on the Imperial and Division 2 cups ahead of April’s Provincial Cup draw. But now the league are facing a massive fixture backlog to try and get the season done and dusted, and with more snow still in the forecast, this won’t be an easy task to sort out, with clubs likely having to play two, and maybe even three, matches a week.

But it was all systems go last weekend, with a full slate of games in both the league and the cups.

Looking at the league action first, the big story came in the VMSL Premier Division where defending champs Coquitlam Metro Ford Wolves lost their unbeaten record at the hands of last season’s runners-up, and the team that beat them in the Provincial Cup final, Pegasus FC. The horsemen ran out 1-0 winners in Surrey on Friday night, continuing a fine run of form that has seen them close the gap at the top to just five points on the previous runaway leaders.

It should be noted that Coquitlam do have a game in hand, and it’s a very tall order for Pegasus to rein them in, but it’s certainly got a lot more interesting than it was a few weeks ago and the Surrey side certainly seem to have the leaders number.

Pegasus have really started to hit their groove in recent games and are now unbeaten in five matches, having given up just one goal, and the top two are set to meet again in Coquitlam on March 14th. Should be a cracker!

ICSF Columbus and North Delta SC remain well adrift at the bottom of the division and look to be heading down. 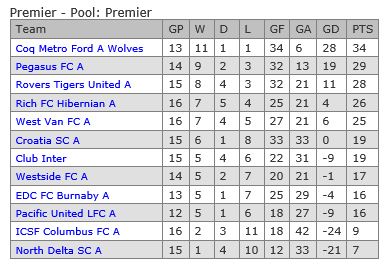 In Division 1, Rino’s Tigers look unstoppable now in their march back to the Premier, beating Campo Atletico 6-2 and Binger’s Army 5-0 in the space of three days last week. That’s 17 goals in their last three matches and it’s given them an eight point lead at the top of the table, with a goal difference of plus 21.

There could still be a battle for top spot, with second placed NVFC Norvan Lions having two games in hand, but it’s hard to see past the Tigers at this point. Two teams go up, so it’s still all to play for with the chasing pack. Just a point to note that if Tigers win promotion, neither Rino’s Fury or Rino’s Vancouver can take the second promotion place as part of the same organisation. 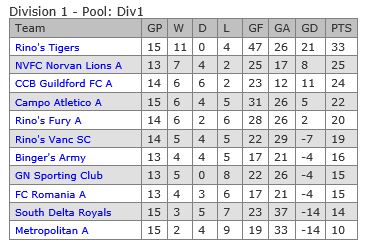 We took in the top of the table battle at Empire Fields on Saturday afternoon between Division 2A front runners 13th Legion and previous leaders Burnaby Metro Athletic. We’re just hoping these two meet in the Provincial B Cup final as we’ve enjoyed both their battles so far this season. 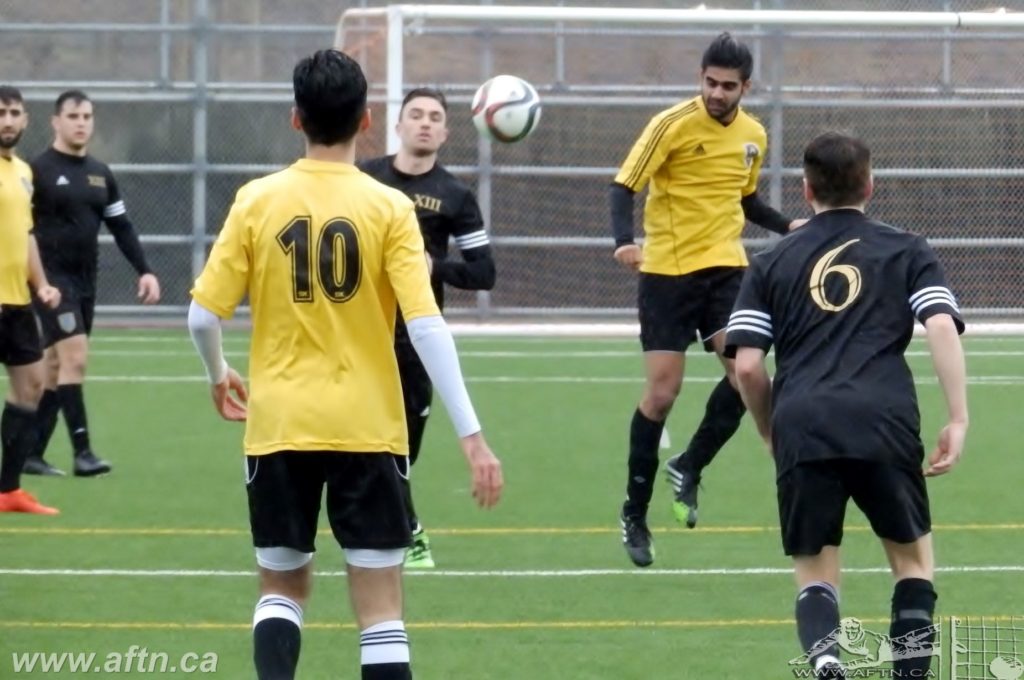 The Burnaby side had regaining top spot firmly in their sights, and led twice before the Legion stormed back to claim a share of the spoils in a 2-2 draw, with their first goal a long range screamer.

Burnaby Metro were disappointed to take just a point from the game and it’s still very much a four horse race in the division with Sarajevo FC and Snipers FC. How the games in hand play out looks to be key here. 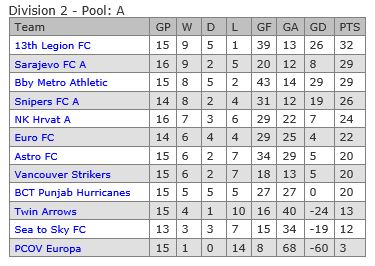 There’s also a four, arguably five, horse race in Division 2B. It was cup time for most of the teams this past weekend, but leaders Shaheen played out a 1-1 draw at home to Vancouver Greencaps on Sunday afternoon to take a narrow one point lead at the top from Burnaby Selects White Eagles. 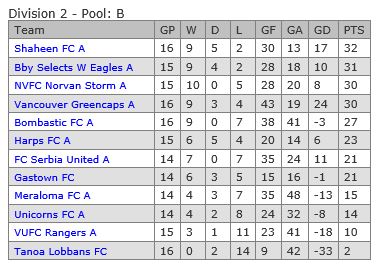 In Division 3, Royal City SC lead the way in pool A by three points from Westside FC Juniors and America FC. Cliff Senior Cobra top pool B by two points from Bosna SC, with a game in hand, while Coquitlam Metro Ford Lupi remain unbeaten in pool C, with a massive ten point lead over Strathcona United, having only conceded seven goals all season.

The Imperial Cup and Division 2 Cup draws have been disrupted this month but are slowly getting back on track after taking precedence over the league action with VMSL All Cups Day coming up thick and fast on April 1st.

There were six First Round (Preliminary Round my arse) ties played this past weekend, with the action getting underway on Friday night as ten-man Campo Atletico needed penalty kicks to get past FC Romania at Trillium after the game finished 2-2 after 120 minutes.

That win sets up the tie of the Second Round. The game everyone wanted to see. Well every one of us on the Take The Piss forum anyway. The plucky underdogs of Coquitlam Metro Ford Wolves will be trying to keep their hands on the trophy against the best team in BC, and reigning Provincial B Cup champs, Campo.

Only one will prevail and you can take in all the action on Friday night at Coquitlam Town Centre, kick off 8pm. BC Place must have been booked that night.

We took in Sunday’s First Round tie between Rino’s Fury and Pacific United on the Point Grey turf. A battle between Division 1 and Premier. We fancied a shock was on the card, but the VMSL Premier side ran out comfortable 3-0 winners. 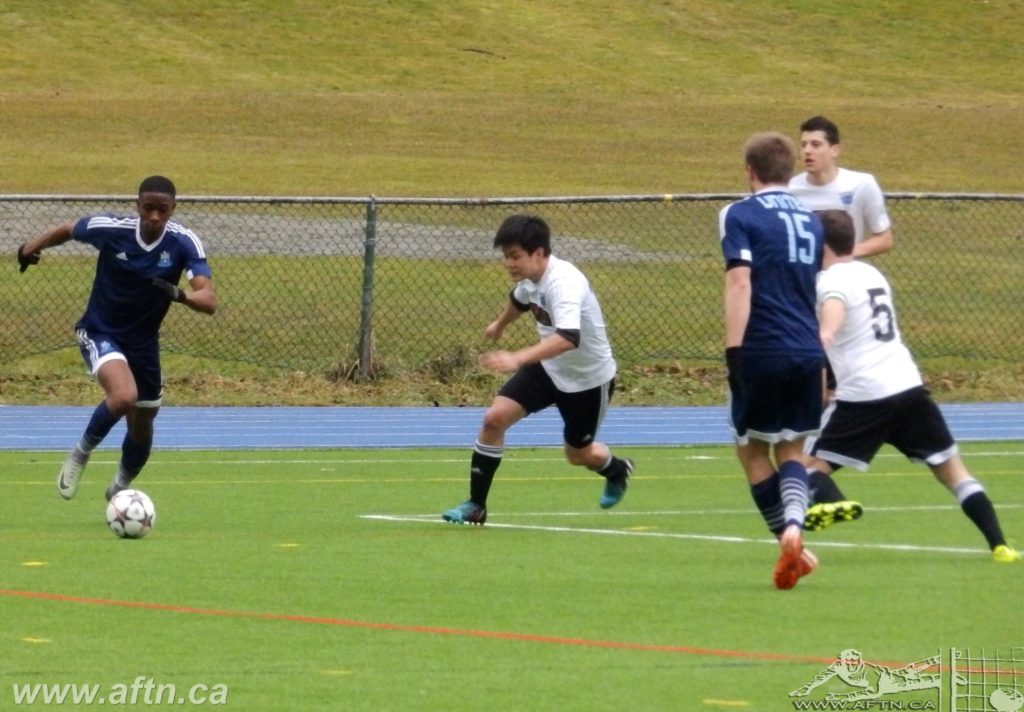 United dominated the early going but only had a 37th minute goal to show for it. They added a second after the break, but the Fury had their own chances, which they squandered, and you had a feeling that if Rino’s could have pulled a goal back they could have had a shot at the upset, with the visitors not having any subs to call upon if the tempo was upped.

As it was, Pacific added a third and were worthy winners, having also rattled the woodwork a couple of times. Their reward is the short trip to face Pegasus in Surrey on Friday night.

In the other First Round ties, Club Inter romped to a 4-1 win over EDC Burnaby and Westside beat North Delta 3-2 in two all-Premier clashes, whilst Rino’s Vancouver won 2-0 at GN Sporting Club and NVFC Norvan Lions advanced when CCB Guildford forfeited their game in two all-Division 1 matches.

You can find the draw for this week’s Second Round matches, with venues and kick off times, HERE. Aside from the CMF-Campo clash, Rovers Tigers United hosting Rino’s Tigers at Surrey on Friday night is the other tie of the round. Should be a cracker and a possible upset. Tigers for the win.

There were some weird happenings in the Division 2 Cup, but it’s been something of a weird season all round.

The Cup kicked off on February 1st when Strathcona United hammered B United 9-0. It was 16 days before another First Round tie was played!

Strathcona then received a bye into the Third Round. They were awaiting the winner of West Coast Saints and America FC in the Round of 32, but that game was abandoned after 77 minutes on Saturday. The match was tied at 2-2 before a mass brawl involving more than a dozen players saw the referee call an end to proceedings and both teams subsequently kicked out of the competition!

It’s been a running joke at Provincial Cup time that we jinx our friends at Rino’s Fury, with a spate of first round exits to show for it. That curse was clearly broken last season when the Fury made a run to the final, but with no Provincial Cup action for the team this season after promotion, we thought we’d jinx them in another Cup instead.

So not content with ruining their match against Pacific United in the Imperial Cup on Sunday, we saw their B team crash out of the Division 2 Cup on Saturday, after a 5-1 trouncing by Vancouver United at Empire. 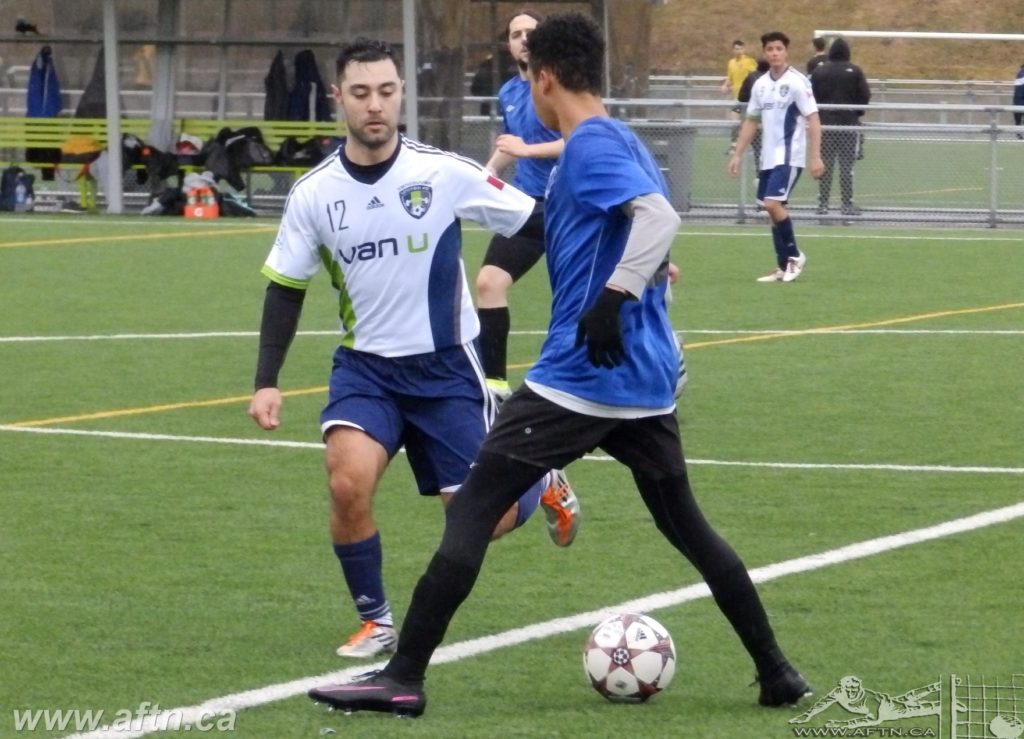 To be fair, we were there to actually watch the 13th Legion/Burnaby Metro game, but still….

Not really sure that there was much jinxing involved as the Fury B’s were never at the (Hasting) races in this one, looking disinterested and a step behind United, who were 5-0 up before Rino’s pulled one back late.

It should have been six too but for a horrendous miss of an open goal late on, which led the guy who played in the cross to yell “are you fucking kidding me?” at the unfortunate striker!

Division 2 Vancouver United now host Division 3 France FC at Empire on Saturday afternoon, with a 2pm kick off. The other game at Empire at that time on Saturday should be a cracker. It’s a battle between Division 2A leaders 13th Legion and second placed 2B side Burnaby Select White Eagles, after the Eagles won 4-2 at Sea to Sky FC last night.

The big shock of the First Round came at Point Grey on Saturday afternoon. Joga Bonito, winless all season and bottom of Division 3A, stunned Division 2 side Harps with a 4-3 win.

You can find all of the results and the fixtures for this weekend’s second round matches HERE.

If the weather holds up, well worth getting out to some of these games. We hope to be at a couple and will bring you all the details next week.