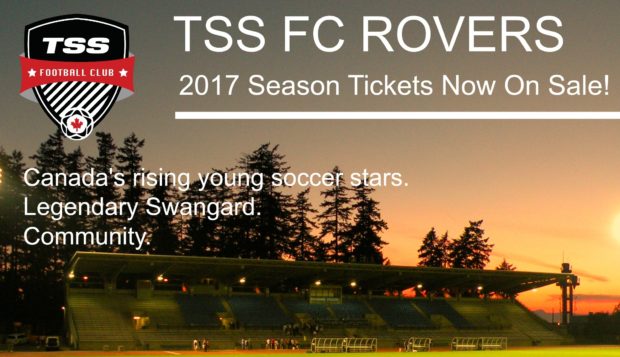 TSS FC Rovers announced their ticket prices for their inaugural USL PDL season on Thursday, and the affordability of their pricing structure has certainly got the club off to a winning start in a crowded marketplace.

A Rovers season ticket package will cost just $70 for adults and $49 for youth under 12. That’s for all seven PDL home matches at Swangard this season and a special marquee friendly that will be announced at a later date, and works out at $8.75 per game.

Individual match tickets will cost $10 per game for adults and $7 for youth.

Tickets can purchased via the club’s new website at tssrovers.com.

Eight games of football, on grass at Swangard, and hopefully on sunny spring and summer days and nights, is a pretty good deal at $70 and it needed to be for TSS to get a foothold in the Vancouver sporting scene in a busy summer period.

With competition on the soccer side from the Whitecaps and WFC2, the Lions in CFL action, and the ever-popular Canadians up at Nat Bailey, there’s only so much money, and time, to go around.

The ‘Caps have struggled to get people out to USL matches, but a big part of that is the venue at UBC, a trip loathed by most fans for location, travel time, and cost of parking. This year games will be split, with 10 at UBC and six in Langley. A season ticket for the UBC games costs $84, with a Langley one $50. That works out at $8.33 to $8.40 a game, but still not in ideal locations.

Swangard Stadium is TSS’ biggest selling point. It’s at a central location for many, with good transit links. It’s got a great grass pitch, in a beautiful setting, and it of course evokes many footballing memories from years past.

There’s a lot of similarities with what the Canadians have going at Nat Bailey Stadium and TSS will be hoping to make the Rovers an affordable ticket of choice for supporters of all ages in the lower mainland.

Less than 10 bucks a ticket with the season pass? Umm yes please! Such a bargain to go see some fantastic footy at Swangard! https://t.co/7Ibw4ULHP1

All right! Me and @jimmy_tako are season ticket holders for the inaugural season for @TSSRovers #supportlocalsoccer

Only $70 for TSS season tix. Great value for some fun nights at Swangard this summer. https://t.co/qXRZ9G6iFx

Really looking forward to games back at Swangard!

And Portland folks, y’all should travel for the June 2 or 16 games! https://t.co/AfRYiyxVmS