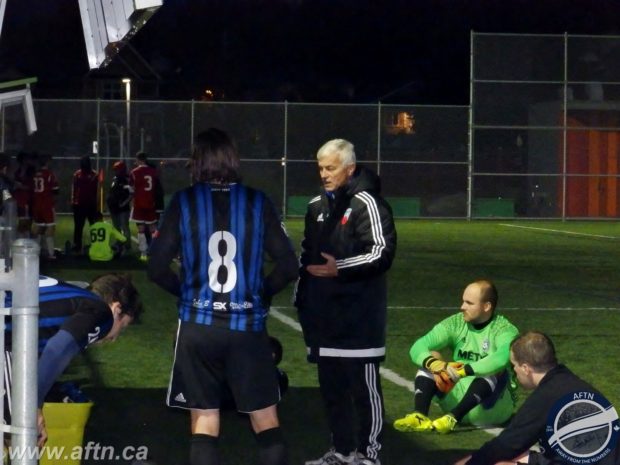 Just when it looked like the VMSL Premier Division title was maybe a one horse race, Pegasus FC reignited it big time with a massive 2-1 win over league leaders, and the previously undefeated, BCT Rovers Tigers United at Newton on Friday night.

Heading into their home match with their closest rivals, Rovers Tigers were sitting with a perfect record of nine wins from nine matches, sitting five points ahead of Pegasus. That lead is now two, and there will be a couple of teams fancying their chances of catching the league leaders in the coming weeks.

We’d hoped to make it out but got waylaid, and apparently missed a cracker! Azad Palani and Rajan Dhadwal got the Horsemen’s goals, with Nick Soolsma finding the back of the net for Rovers Tigers.

Croatia SC sit in third place, seven points behind the leaders, following their 1-0 win at West Van on Friday night. Johnny Sulentic grabbed his second of the season to secure the three points for the visitors.

Club Inter move up to fourth in the table after Milad Rahmati grabbed his second of the season in Saturday’s 1-0 win at Campo Atletico in Burnaby. Inter are nine points behind Rovers Tigers right now but have two games in hand after their appearance at this year’s nationals. Win those and they’re right in the mix, especially as they are a team who usually come on to their game in the second half of the season.

Having been preoccupied with the ‘Caps and college games the last couple of weeks, the rain thankfully went off long enough on Saturday afternoon to get me out and about to take in the final VMSL Premier match of the weekend, and do a weekly round-up again, with Rino’s Tigers hosting Coquitlam Metro Ford at Trillium (there’s that 15 minute travel radius for us again!!). 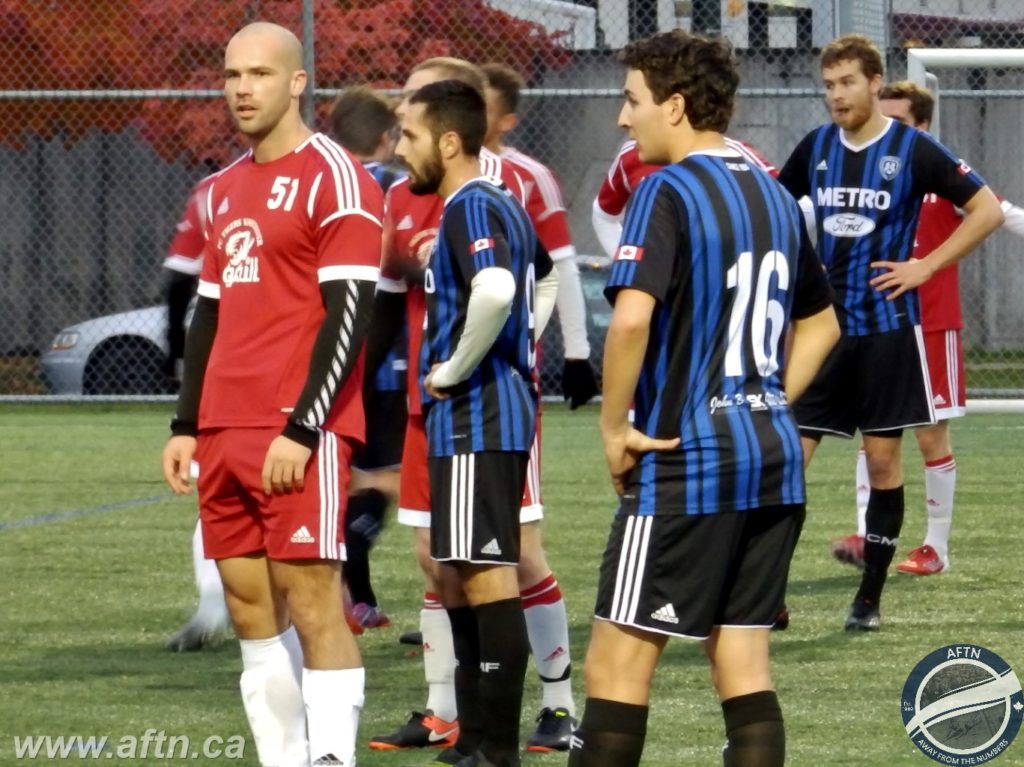 It was my second time seeing the struggling back to back champions this season, but the first full match I’ve taken in of theirs. Their downfall from winning the last two VMSL Premier titles to being in a relegation dogfight has been incredible to see play out from afar and we wondered just what has happened in Coquitlam.

On the basis of how they played in the first half against Rino’s, where they looked a side a little devoid of ideas, you can see why, but on the basis of the second half performance, it’s hard to see how they’ve let this season get away from them.

It was Rino’s who came out all guns blazing, taking the game to Metro Ford and deservedly going ahead in the 9th minute thanks to a neat finish from Whitecaps Residency alumni Declan Rodriguez.

Metro Ford tied things up six minutes later, with Ryan Ashlee staying up after a free kick wasn’t cleared and slotting home a low cross after some poor Tigers defending. Hat tip to former Whitecaps legend Stevie Kindel though for a fantastic cross field ball in the set up.

The rest of the half was fairly even, with Rino’s shading the action for me. The second half was a Coquitlam onslaught, with Rino’s struggling to pose any offensive threat.

It was no surprise when Vito Iacobellis finally put Metro Ford ahead in the 74th minute, sweeping home a cross from about eight yards out. Carlo Basso put the icing on Coquitlam’s cake in the closing minutes, running in on goal and firing home from the edge of the box, getting his reward for a hard working performance all afternoon.

We grabbed some video highlights from the match for you (albeit very dark for some reason). All three Coquitlam goals and some other chances. Sadly missed Rino’s as was zipping my jacket up!

It’s not just the top of the table that is shaping up nicely for an exciting few months ahead, so is the relegation battle.

CCB LFC United’s early season struggles may be behind them as they get some players back. Goals from former Whitecaps PDL player Bobby Jhutty and Rizal Ganief gave CCB a 2-0 win at home to Richmond Hibernian, lifting them off the foot of the table and level on points with the Hibs.

EDC Burnaby now fill that last place position following their 3-2 loss at home to Westside. A brace from Zach Karmel and a goal from Arrio Thomas did the damage for Westside, after Denis Ananga and Amara Jr Toure had put the home side 2-0 up and seemingly in control in the first half.

So all those results over the weekend leave the VMSL Premier Division standings as follows: 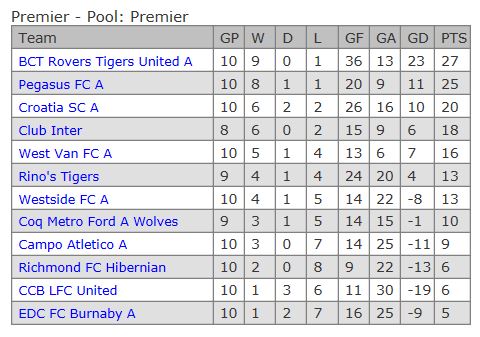 It’s shaping up to be one hell of a promotion battle in Division 1 as we approach the halfway point of the season after this weekend’s matches.

NVFC Norvan Lions are sitting comfortably at the top of the table on 30 points, with a hundred percent record from their ten matches. Their latest victory was a 4-0 triumph over the struggling Richmond FC Royals on Saturday afternoon, maintaining their six point lead over the now second placed Metro Athletic FC Burnaby.

Metro Athletic made hard work of it before coming away with a narrow 1-0 win over bottom side GN North Delta, who remain pointless and will need an amazing turnaround over their remaining 12 matches to avoid relegation.

Two points separate the teams in second to fourth, with Guildford FC dropping to third after their surprise 4-0 thumping at ICSF Columbus on Saturday afternoon. It was the Surrey side’s first loss of the season and moves Columbus to within one point of them.

Although those three sides look to be the ones fighting for the second promotion spot in the second half of the season, don’t write off FC Romania, who have lost only one of their last eight matches, banging in a lot of goals in the process, and have moved up to fifth on 19 points, just five behind the second promotion place. 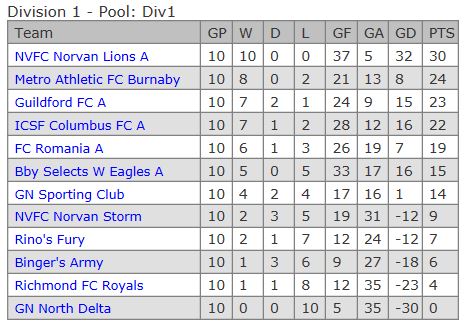 In Division 2A, 13th Legion and Coquitlam Metro Ford Lupi top the table on 22 points after nine matches, a five point gap over third placed Vancouver Strikers, with a game in hand.

13th Legion came away with a hard fought 1-0 win over the Strikers in their big match at Trillium on Saturday afternoon, while Metro Ford won 6-3 at Bombastic FC. 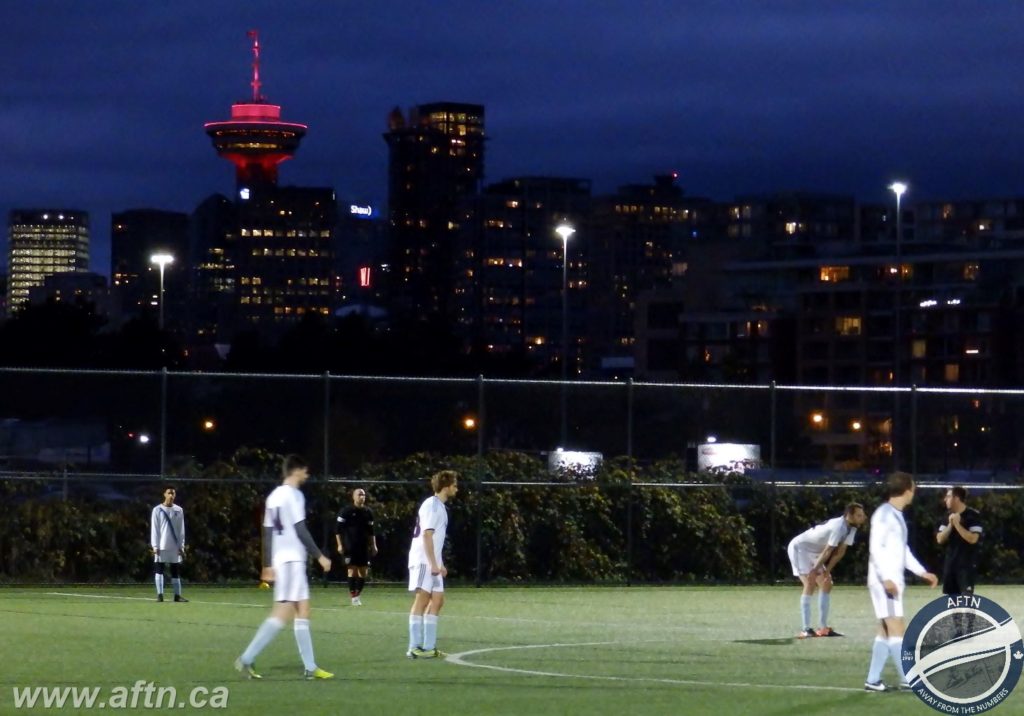 Those two should have quite the battle in the run-in for the one promotion place. 13th Legion started strongly last season before the snow and fixture congestion did them in. The Lupi are looking for back to back promotions after romping away with one of the Division 3 titles last term.

In Division 2B, Vancouver Greencaps have kept their dominant start to the season going. The BC Provincial B Cup champ are unbeaten after their first ten matches, with eight wins and two draws, and lead the way at the top of the table by seven points over Shaheen FC.

Their latest win was a 2-1 victory over Westside FC Juniors on Thursday night and it’s hard to see them slipping up barring an incredible loss of form. But the winter months can have some strange effects on teams once the Cups and snow kick in.

After some runaway champions over the past couple of seasons, all three of the Division 3 promotion battles look like they’ll be tasty to watch play out.

In Pool A, three points separate the top five teams, with Strathcona United and Westside FC Black Aces leading the way on 20 points.

The unbeaten West Coast Saints have the sole lead in Pool B, two points ahead of GFC United Lions and Siaron. NFVC Norvan Vikings sit on point further back in fourth.

And capping off a good season for Vancouver Greencaps, their ‘B’ team lead the way in Pool C on 24 points, having conceded just five goals in their first nine matches. West Coast Celts sit two points behind, with Richmond FC Olympics a further point back in third.

We’re looking forward to getting out to see some of these possibly decisive games over the next few weeks.

Before we go, we have to give a big shoutout to the unbeaten U21 leaders, Faly Academy. 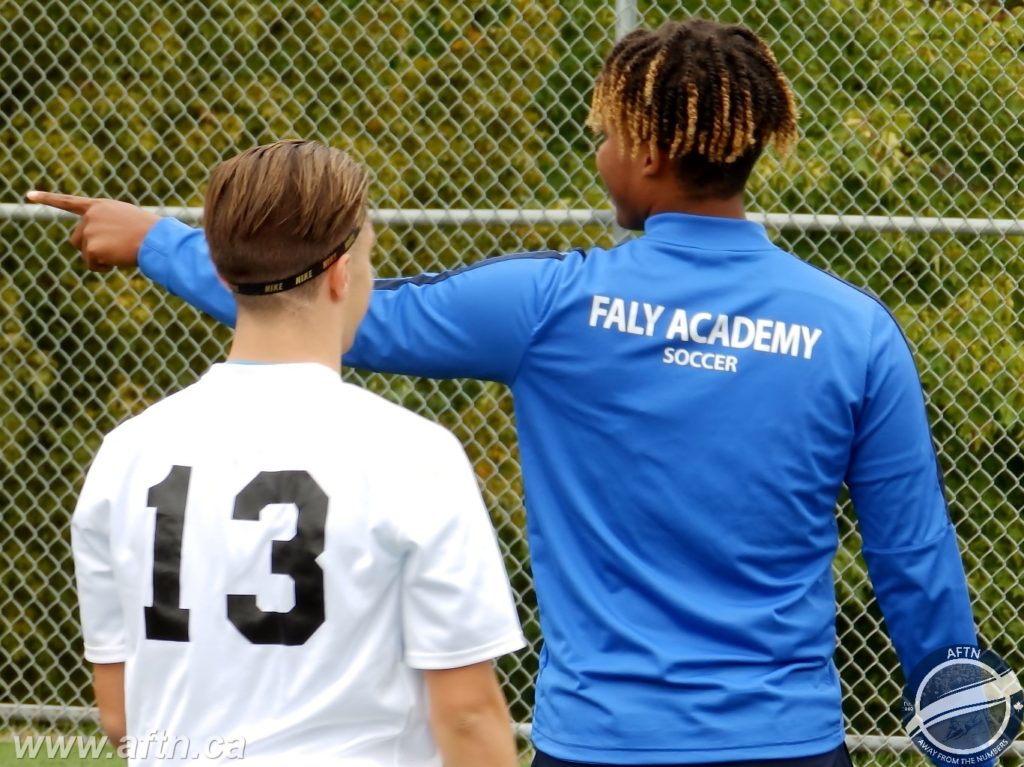 They’ve been a dominant force in the U21 division this season, conceding just six goals all year. Their latest victory was a whopping 14-1 win at last placed Poco FC Cascadians on Saturday night. That took their goal difference to plus 36 on the season. Poco’s goal was only their fourth of the season, and they sit with a goal difference of minus 56.

For all your VMSL news, results, and this weekend’s fixtures, check out VMSLsoccer.com.