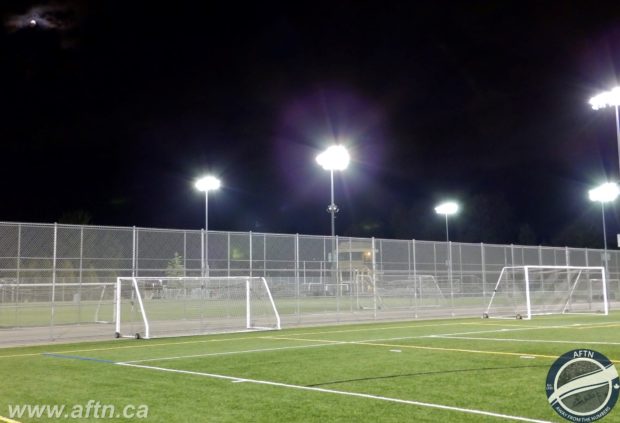 A gap is starting to open up at the top of the VMSL Premier Division after the first five matches of the new season.

As most teams continue to take points off each other, BCT Rovers Tigers United and Pegasus FC remain unbeaten, extending their lead at the top of the table.

Rovers Tigers United were made to work hard on Friday night to keep their 100% start to the season intact. Goals from Joey Brar, Harpreet Khakh, and Nick Soolsma gave the league leaders a 3-2 win at EDC Burnaby.

That kept their lead at the top to two points over the also unbeaten Pegasus FC. The Horsemen won 2-0 at Richmond Hibernian last Friday thanks to a brace from Whitecaps Residency alumni Yassin Essa.

There’s now a five point gap between them and third placed Croatia SC, who drew 2-2 at Westside FC on Saturday afternoon thanks to David Malamura’s fifth of the season and a first of the year from Johnny Sulentic.

In a match that could already have big relegation implications come the end of the season, a pair of goals from Matias Guedes gave new boys Campo Atletico a huge 2-1 win at the still winless CCB LFC United. Former Whitecap Caleb Clarke made it two in two matches for the home side, but it wasn’t enough.

With Coquitlam Metro Ford Wolves having a bye week with Club Inter being at the nationals in Surrey, Rino’s Tigers and West Van played out a 0-0 draw in the week’s other match.

All that leaves the VMSL Premier table looking as follows after week five: 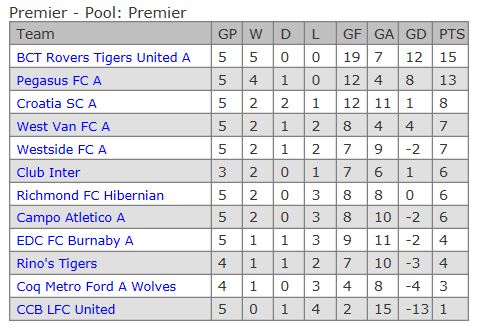 The split between the top and the bottom half of Division 1 started to open up after just a few games and remains looking that way.

There’s now just two unbeaten teams in the division with Burnaby Metro Athletic bouncing back from losing their own undefeated record the previous week to hand ICSF Columbus their first defeat of the new season, coming way with a 2-1 win at Empire on Saturday afternoon.

That leaves NVFC Norvan Lions and Guildford FC as the last two teams with 100% records. The Lions came away with a 3-0 win over GN Sporting Club last Saturday, with Guildford given a tougher task in their 2-1 victory at home to Burnaby Selects White Eagles the night before.

Rino’s Fury and GN North Delta remain rooted to the foot of the table with no points from their first five matches, as last weekend’s results left the Division 1 table looking as follows: 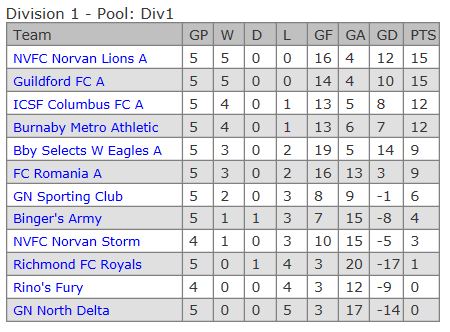 Coquitlam Metro Ford Lupi lead the way in Division 2A with four wins out of four, with the also unbeaten Bombastic FC just a point behind after their first five matches. Vancouver Greencaps are the only unbeaten side in Division 2B, leading the way with 13 points from their first five games, as they look to build on their BC Provincial B Cup success in May.

There’s a full slate of matches this Friday, Saturday, and Sunday. Check out all the fixtures, results, and standings on VMSLsoccer.com.