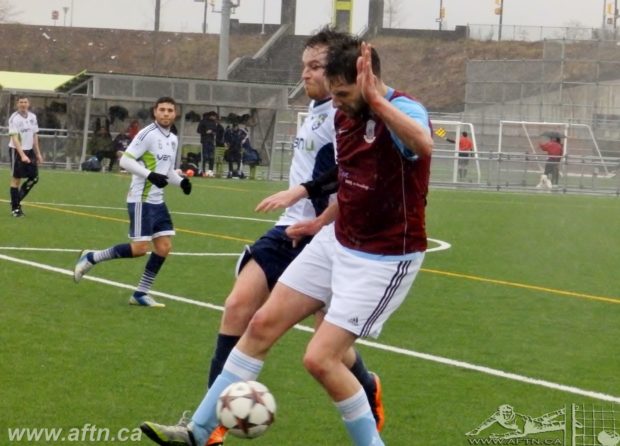 With snowmageddon over (we hope!), the games are coming thick and fast now in both VMSL leagues and cups, and some champions, and promotion and relegation issues are now either decided or becoming pretty clear cut. It’s also semi-final weekend in all of the cups, so there’s a lot of meaningful matches for you to take in over the next week.

In the VMSL Premier, runaway leaders Coquitlam Metro Ford Wolves are all but crowned back to back champions. A six point week saw them beat Pacific United 3-1 on Friday night and then follow that up four days later with an important 2-0 win over the chasing Pegasus FC.

That gives them a nine point lead, with four games in hand on second place Croatia SC, who are on a fine four game unbeaten run and took six points themselves this past week. Coquitlam have three in hand with third placed Rovers Tigers United, and technically still need three points from their last seven matches to officially clinch the title, but it’s basically theirs.

The big battle is behind them for final positioning and Provincial Cup qualification, but that’s close to being set as well.

At the other end of the table, ICSF Columbus are officially relegated back down to Division 1. North Delta SC are mathematically still hanging on, but they need to can grab three wins in their last three matches and then hope for a miraculous set of bad results from both EDC Burnaby and Pacific United. It looks highly unlikely but EDC have three tough looking games left, so they at least still have some hope. 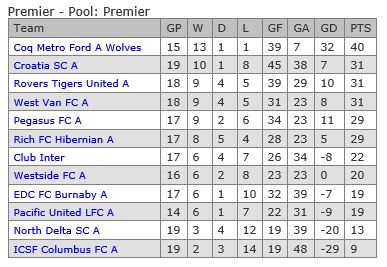 In Division 1, leaders Rino’s Tigers have basically clinched promotion back to the Premier Division barring a massive goal swing and three losses from their final three matches. They still have work to do to clinch the title, however, in what is looking like a promotion battle that’s going to go down to the wire.

Second placed Campo Atletico put the cat amongst the pigeons, as they so like to do, with a stunning 2-1 win at NVFC Norvan Lions on Sunday, with only ten players available.

Norvan still control their own fate with two games in hand, but the loss drops them to fourth, after CCB Guildford got their own promotion hopes back on track after three straight losses, with a 6-3 win at GN Sporting Club.

All that leaves Rino’s Tigers needing four points to clinch the Division 1 title, but it’s anyone’s guess which team will go up with them at this late stage of the season.

Norvan are in the driver’s seat as we mentioned, but Campo’s final three matches are against three of the bottom four teams, so they’ll be confident of taking nine points and putting the pressure on. It would be a remarkable story for the Division 2 Provincial Cup winners after they were only promote due a vacancy arising.

With only one team being relegated this season, following Akal going tits up by week four, the writing looks on the wall for Metropolitan following a 1-0 loss to Binger’s Army on Sunday. They need to win both of their remaining two matches and then hope for one of the three teams above them to have a nightmare end to the season. Definitely possible, but with their next match being at home to Rino’s Tigers on Sunday, a very tall order. 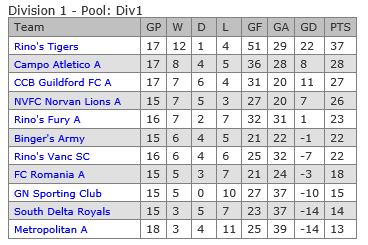 In Division 2A, Burnaby Metro Athletic are back on top after Sea to Sky FC forfeited their match on Saturday. That gives them a three point lead over Sarajevo FC in second and 13th Legion in third, but the Legion have two games in hand and, somewhat crazily, seven matches still left to play in what is going to be a frenetic end to the season for them with Provincial Cup play as well.

It now also looks like a three horse race in Division 2B as well. Burnaby Selects White Eagles hold a three point lead second placed Shaheen FC and a four point advantage over third placed NVFC Norvan Storm, but both those teams have a game in hand.

The White Eagles and Shaheen meet this Monday in North Van in what could have big ramifications on the final placings, with Shaheen and Norvan Storm meeting in the last game of the season on April 11th. Two massive matches to take in there.

Only the division winners will be promoted.

There’s still so many matches left in Division 3 that very little is settled.

The unbeaten Coquitlam Metro Ford Lupi may be focused on their Division 2 Cup run right now, but they’ve now officially clinched the Division 3C title and promotion to Division 2. It may look in the table that they still need two points to fend off second placed Strathcona United, but their March 26th match at home to Richmond FC Olympics has already been forfeited by the visitors, so they have the points they need. Congratulations to the Lupi on a wonderful season. Can they now go on and do the double?

In Division 3A, Royal City SC still hold a narrow three point lead over Westside FC Juniors with both teams having two matches remaining, but it’s all in the New Westminster side’s hands now.

In Division 3B, Bosna SC have a four point lead at the top with two games remaining, but second placed Cliff Senior Cobra have three games in hand and five matches remaining, so are the favourites to go up. Interestingly the two have still to meet on April 8th, so that could be a match with a lot on the line.

Cobra were in Division 2 Cup action on Tuesday night, going down 6-2 to Division 2 side Shaheen FC in their finally played quarter-final.

Two of the other quarter-finals were played over the weekend and Shaheen will now face Coquitlam Metro Ford Lupi in the ‘Match of the Round’ in the first semi-final at Memorial South turf at 2pm on Saturday.

Lupi edged through 3-2 at home to Strathcona United on Sunday to clinch their place in the last four.

We took in the first quarter-final of the weekend at Empire Field on Saturday afternoon when a goal in each half from Vancouver Strikers saw off the challenge of fellow Division 2 side VUFC Rangers in the heavy rain. 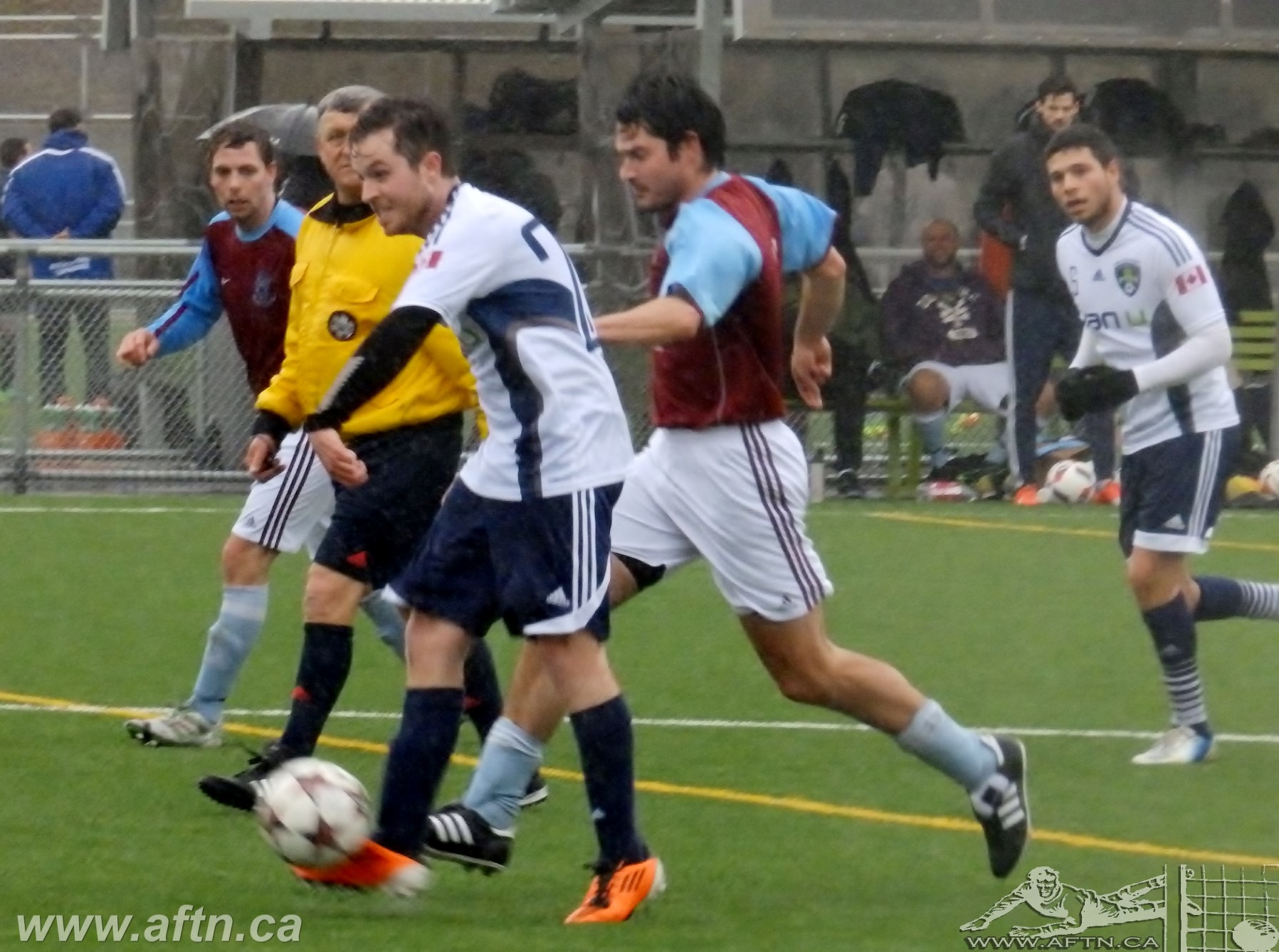 Vancouver United finished the match with ten men after a rash challenge on the Strikers’ keeper from following in on a free kick. After that, it was game over for the Division 2 strugglers.

Strikers will have to wait for their semi-final opponents however.

The Division 2 Cup has been particularly hard hit with the weather disruption, and to add a further pain in the ass for the VMSL organisers, Wednesday’s last quarter-final match between 13th Legion and NVFC Norvan Storm was abandoned due to floodlight failure on what was a wild night of torrential rain.

Those two teams will try again this Saturday afternoon, with the winner facing the Strikers next Friday at Trillium at 8pm. Lights permitting!

Both Imperial Cup semi-finals will go ahead this weekend though, with Empire Field being the neutral venue for both in a double header.

Holders Coquitlam Metro Ford Wolves take on Rovers Tigers United in the first semi at 2pm, with Pegasus taking on West Van in the second one at 4.30pm. Should be a couple of crackers.

If you fancy getting out to some local soccer action this weekend, and we always encourage you to do so, you can find all of this week’s fixtures HERE.