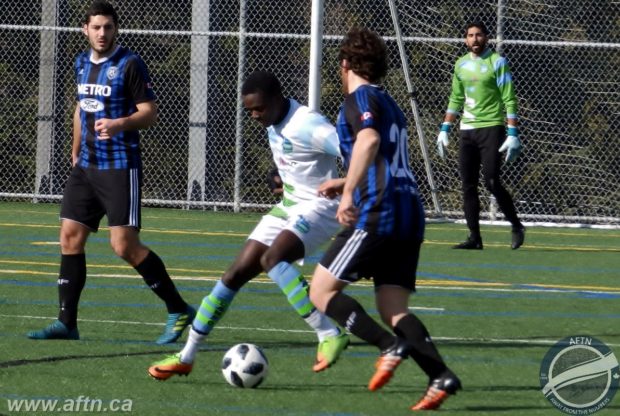 The 2017/18 Vancouver Metro Soccer League is coming to a close and with most teams having just one league game remaining, the battle for Provincial Cup places and to avoid the drop are still to be settled.

As things currently stand, only the top two teams, BCT Rovers Tigers United and Pegasus FC, have earned their place in the Provincial Cup draw. West Van and Club Inter are looking good to join them, with Croatia SC, Rino’s Tigers, and Coquitlam Metro Ford Wolves looking for some help or a deep Cup run to join them.

At the other end of the table, four teams are still battling to avoid the two relegation places, with all still to play for.

There were four league matches played over the weekend, and with many of the top teams in Imperial Cup action, the focus was firmly on the battle to avoid the drop.

CCB LFC United and Richmond FC Hibernian were the biggest beneficiaries from the weekend, both scoring crucial wins over their relegation rivals.

Richmond secured their Premier status for another season with a 3-2 win over EDC Burnaby on Friday night at Burnaby Lake thanks to two goals from SFU Clan’s Riley Pang and a fifth of the season from Cameron Stokes.

The loss leaves EDC sitting precariously one point above the drop zone, with one game left to play. But their fate at least remains in their own hands if they come away with a win against Coquitlam Metro Ford Wolves at Burnaby Lake on March 23rd.

CCB LFC United on the other hand are now waiting and watching, having wrapped up their season with a win and a loss following two matches in four days.

CCB have staged something of a great escape these past few weeks after languishing at the bottom of the standings for much of the season. With the players they’ve brought in to their squad, it always felt that they were capable of dragging themselves out of the danger zone, and they did just that on Friday night with a massive 2-1 win against bottom team Westside thanks to goals from Andy Phillips and Mamadi Camara.

That left CCB knowing that a win on Monday night in the rearranged game against Pegasus FC would see them safe as a Premier side for next season, while a draw would see them facing a relegation playoff at the very worst.

The Horsemen had other ideas though and a Javid Khan goal gave Pegasus the narrow 1-0 win to leave CCB sitting fourth bottom and hoping that EDC and Campo Atletico don’t both win their last match of the season. If they both do, then CCB will be relegated.

Friday’s result leaves Westside all but down. They’re three points off forcing a relegation playoff, but would need to both win their last match of the season away to Rino’s Tigers on March 24th and hope that EDC and Campo don’t pick up a point or three before then to do that.

Talking of Campo Atletico, the writing has looked on the wall for them for a few weeks now, having no matches against the teams around them. A run of six straight defeats, where they’ve conceded 29 goals, has seen them drop into the bottom two after a good first two thirds to their first ever Premier campaign. 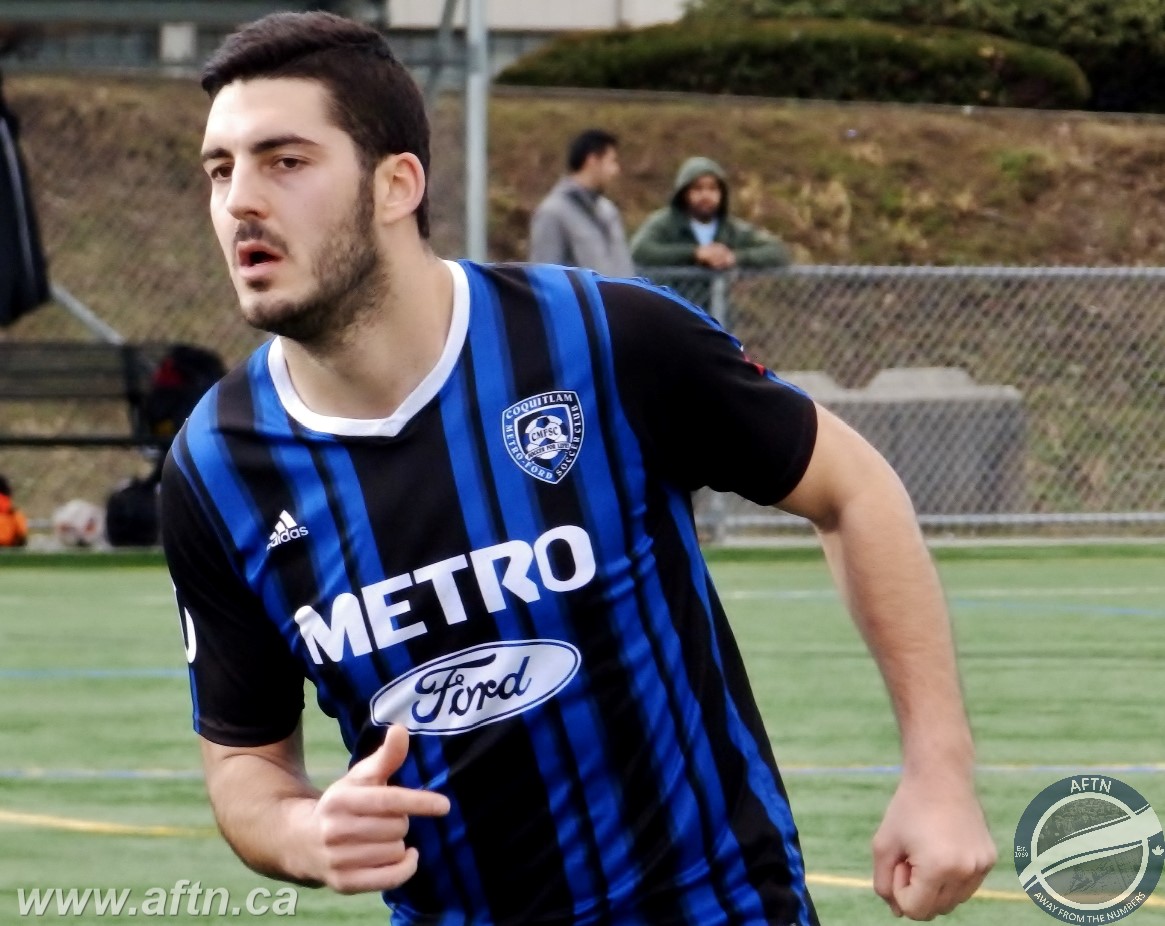 Their latest hammering came at the hands of Coquitlam Metro Ford Wolves, who ran rampant against Campo at Burnaby Lake on Saturday afternoon, with a hat trick from leading scorer Carlo Basso leading the way in a 7-1 rout.

Metro Ford were dominant from the start and headed into the break with a 2-1 lead and it would have been more but for a third goal being called back just before the break. That maybe gave Campo some hope of a possible comeback, but Metro Ford took them apart in the second half, scoring five goals, three of them from Basso.

We only caught the tail end of the first half due to Whitecaps training, but here’s our video of the second half highlights, including all five goals.

The defeat leaves Campo needing a win against Rino’s Tigers in their final match to guarantee their Premier survival. A point may get them into a relegation playoff but they’d be left needing Metro Ford to beat EDC to force that.

There could yet be some twists and turns left at both the bottom and the middle of the table, and the weekend’s results have left the standings looking as follows: 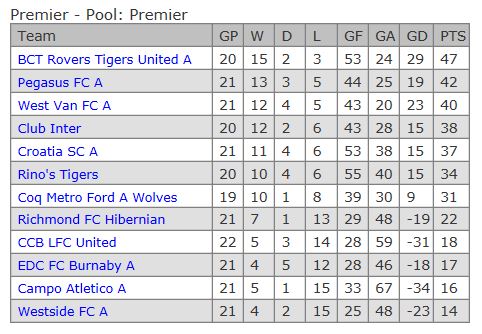 There were three Imperial Cup games this past weekend.

In a snow delayed second round match, Rino’s Fury won a tight all Division 1 affair against GN North Delta 3-0 thanks to three goals in the final 15 minutes. Placide Mountali-Oboua finally broke the deadlock in the 76th minute before Pablo Zubiria hit a brace in the last ten minutes to set up an all-Rino’s quarter final against Tigers at Point Grey on Saturday afternoon.

Pegasus FC take on West Van in what should be a cracking quarter-final at Newton tonight. Kick off is 8.30pm.

Two teams have already made it to the semi-finals.

Both Imperial Cup semi-final will take place at Empire Fields on Saturday March 17th. With the ‘Caps away in Atlanta, we encourage you to get out and see a couple of great matches. Kick offs will be 1.30 and 2.30pm and we’ll bring you more news next week.

You can get all the latest VMSL news, scores, standings, and fixtures at vmslsoccer.com.