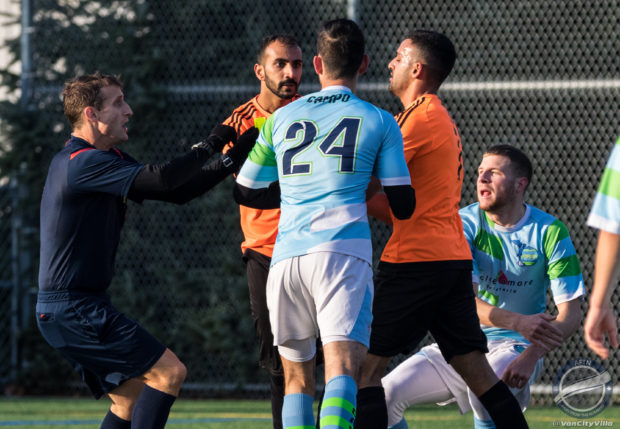 VMSL Premier Division leaders BCT Rovers Tigers United got themselves back on track last weekend, as fog and failure took care of their nearest challengers, and they head into the last round of matches before the Christmas break in a comfortable position, with a six point lead at the top.

It was a strange Friday night around the VMSL.

Bottom club CCB LFC United had already forfeited their match at West Van, affording the Ambleside lads a 3-0 victory, while second placed Pegasus FC saw their match at home to Coquitlam Metro Ford Wolves at Newton Athletic Park in Surrey called off due to fog.

Two matches did go ahead though on Friday and the in-form Rino’s Tigers, playing their second match in three days, dealt Croatia SC a massive blow to their championship hopes at Burnaby Lake. Goals from Alberto Cirac-Perez and from the TSS Rovers duo of Connor MacMillan and Kristian Yli-Hietenan gave Rino’s the 3-1 victory, with Jason James getting the home side’s only goal of the game.

That victory saw Rino’s move up to fourth in the standings, and took their unbeaten run to five matches, four of them wins.

Friday’s other game saw Richmond Hibernian beat Westside 4-2 at Minoru thanks to braces from Matteo Serka and SFU Clan’s Riley Pang. And it was braces all round, with Byunghan Im getting both the goals for Westside, who find themselves in a right battle to avoid the second relegation spot.

That set the scene nicely for BCT Rovers Tigers United to increase their lead at the top the following day, but they were made to work hard for their three points in what ended up as a narrow 3-2 win over Campo Atletico at Burnaby Lake on Saturday afternoon. 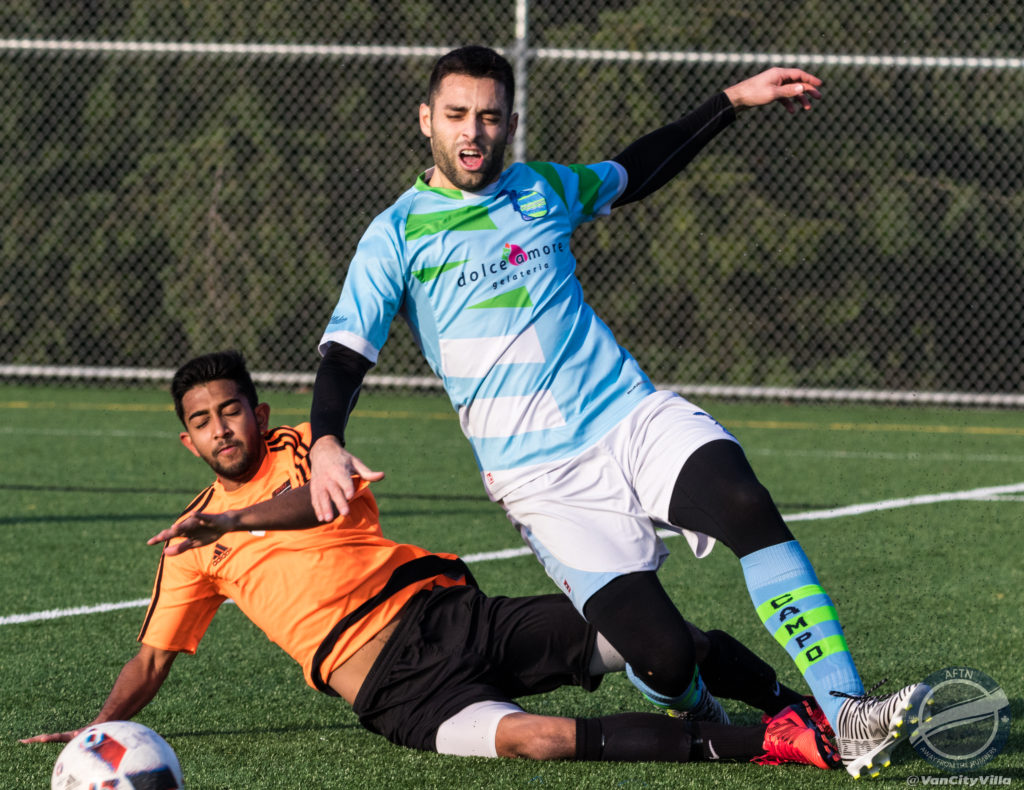 With Campo missing three of their best attacking options, including leading scorer Edson Castro who was playing in an indoor league match in Bellingham, the writing looked to be on the wall for the home side. Even more so when Pavi Dhillon fired Pegasus into an early lead.

When Ryan Dhillon added a second in the 22nd minute, and Pavi Dhillon a third three minutes later, it looked like a rout could be on, with Campo failing to muster any real attacks.

Even when Cristian Villatoro pulled one back for Campo with a deflected free kick with 12 minutes of the half remaining, you didn’t see any real danger for the league leaders.

But Rovers Tigers seemed to lose their way, creating some chances but lacking any real intent to add to their three goal tally, even when Campo lost their goalkeeper at the start of the second half following a heavy challenge. His replacement, an outfield player, had one save to make for the remainder of the match, which will be concerning to the Surrey side.

They still looked the better side by far, but were given a real fright when Villatoro added a nice solo second goal in the 76th minute.

Could Campo stage a shock comeback for the second week running? No, as it turned out, and Rovers Tigers were reasonably untroubled in the closing minutes. Three big points for the league leaders and what could be three crucial ones when it all shakes out.

Duncan Nicol (@VanCityVilla on Twitter) was at Burnaby Lake shooting the game for us and you can see his photos on our Flickr account and in the slideshow below.

You can also see all of the goals, and some of the other incidents from the match, in our highlights video.

Provincial Cup champions Club Inter were looking to keep pressure on Rovers Tigers at the top in the final Premier match of the weekend, but a Mladen Ljumovic goal gave EDC FC Burnaby a shock 1-0 win at Memorial Park on Saturday afternoon, and boosted their hopes of avoiding the drop.

That loss dropped Inter down to fifth in the standings, nine points of top spot, but with a game in hand.

Those results leave the VMSL Premier standings looking as follows. 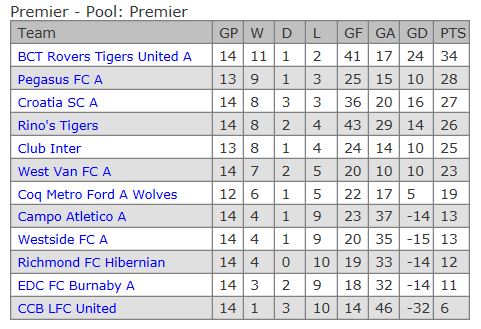 You can get all this weekend’s fixtures, plus results and standings across all the divisions, on VMSLsoccer.com.