What a weekend of action it was in the Vancouver Metro Soccer League (VMSL). We saw champions crowned, some key points won in the fight for Provincial Cup spots, and the relegation battle saw a couple of teams do themselves huge favours and a couple fall deeper in the mire.

We’ll start at the top of the table and the clash between the two Surrey powerhouses that have led the way all season. BCT Rovers Tigers United needed just a point against second placed Pegasus FC at Newton on Friday night to win the championship and they got it in perhaps the least exciting way possible – a nil-nil draw! But they won’t care a jot about that.

VMSL photographer Vladimir Esty was there capturing the match and you can find all his photos HERE and his photo of a very happy set of new champions in our main photo above.

Huge congratulations to Rovers Tigers. They’ve been the standout side all season long, with only a few wobbles and three losses along the way. A well deserved title secured. Can they make it the double or even the treble? Well there’s going to be a lot of teams out to stop them doing that, but you wouldn’t bet against them right now. The temptation will be to play their fringe guys in their last two league matches, but as we saw with Coquitlam Metro Ford’s failings last season, you want to hit the Provincials in some form and with a stable line-up.

Joy at the top, and delight at the bottom too for Richmond Hibernian, who came away with a massive win in their fight to avoid the drop in a veritable six pointer, while two others in the relegation battle shared the points in their clash that could yet prove crucial.

With just three points separating the bottom five teams heading in to the weekend, and four of the sides facing each other, you felt something was surely bound to give. It did, but just a little.

Heading into Friday night’s match at Minoru, Richmond Hibernian were one point ahead of second bottom CCB LFC United, but with vastly differing form. Richmond were winless in their last five league matches, while CCB had staged a late revival in their bid to avoid relegation, winning their last three.

The formbook went out the window though and two goals from Craig McMillan and one from Cameron Stokes, gave the Hibees a 3-1 win and a four point edge over their relegation rivals with two matches remaining. Amar Takhar got CCB’s only goal on the night, but they still have a great shot at picking up points when they host last placed Westside in two week’s time.

Talking of Westside, they’ve been on a disastrous run of form since beating EDC Burnaby in early November, as nine straight defeats has left them sitting more and more adrift at the bottom. They had a chance to shake out of it when EDC made the trip to Point Grey on Saturday afternoon.

Westside needed a win against a team just three points ahead of them more than ever in this one. It would have been the perfect bookend to those set of defeats and one that would have lifted them out of last place. It wasn’t to be, however, but both teams did at least come away from the match with a point apiece following a 0-0 draw.

The draw keeps Westside at the bottom, but within two points now of a potential relegation playoff decider, while EDC Burnaby move up a spot to fourth bottom. It may not have been a glamorous draw, but the point gained could be invaluable to one or both teams come the end of the season. 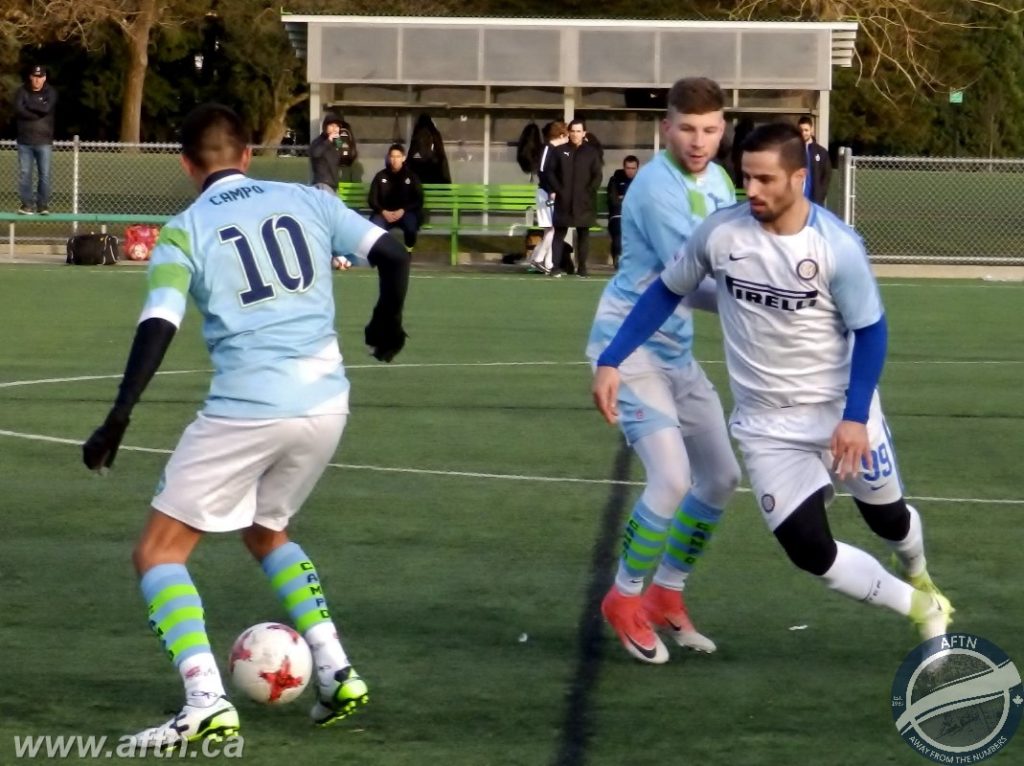 While that relegation battle was being played out, the fifth team in the mix, Campo Atletico, headed to Memorial Park to face Club Inter in some poor form of their own. Last year’s promoted side looked to have surprised everyone with some good results and nice football giving them what looked like mid table safety. But three straight losses, and five defeats in their last six, has seen them sink right back into a relegation dogfight, with no matches against the teams around them in the run-in.

And it didn’t get any better for them against last year’s Provincial Cup champions, who romped away to a 5-1 victory thanks to a Milad Mehrabi hat-trick.

The first half was one way traffic from Inter, who opened the scoring in the 13th minute when Dzenan Bezdrob first timed a perfectly flighted Mehrabi cross to the back of the box to fire home. It was two 15 minutes later when Mehrabi rose to head home a free kick, with the help of a fumble from the Campo keeper.

Campo hadn’t really threatened the Inter goal in the first 45 minutes and when Mehrabi capitalised on a poor defensive giveaway to make it 3-0 five minutes into the second half, it looked game over for the visitors.

But full credit to Campo who immediately went up the pitch and reduced the deficit to two again mere seconds later when Mostafa Jafari fired home, and they could, and should, have added a second in the 63rd minute when a goalmouth scramble saw the ball first cleared off the line and then Matias Guedes crash his close range shot off the bar.

It was to prove a costly miss as Inter went straight up the pitch this time and added their fourth when Mehrabi raced clear and hit a deft finish into the bottom corner for his hat-trick.

Bezdrob rounded off the scoring three minutes later in the 67th minute when Mehrabi squared the ball to him and he finished at the second attempt after his first shot crashed off the left hand post.

Both teams had chances they should have buried to add to the scoring, but a 5-1 final was the end result, lifting Inter up to fourth and dropping Campo to third bottom, just one point above the relegation places and with two difficult games to come.

You can see our video highlights of the match below, including all six goals:

The battle for the Provincial Cup spots continues to be fierce. Just when you think a team has made or lost ground, a result comes along to shake things up and this weekend was no different.

The VMSL have six spots allocated to them for this year’s Provincial A Cup, which gets underway in April. That’s one less than previous years, with that place awarded to an island team instead. With the two Imperial Cup finalists given a berth, that means teams have to finish in the top four of the league to guarantee their spot. A fifth or sixth placed finish may not be good enough this year. It likely will be, but you can’t take anything for granted, and the remaining two matches from this past weekend may have huge implications for those places.

West Van FC made great strides in securing a top four finish with a surprise 6-2 thumping of Croatia SC at Empire Field on Friday night. The teams headed into the match level on 37 points and sharing third place. Croatia have looked strong all season long, and although West Van have found a bit of form since the end of last year, and were unbeaten in nine, I don’t think anyone would have expected this one-sided scoreline.

A Keith Jackson hat-trick led the way for West Van, who also had goals from Markus Tobias Nickol, Shane Howard, and Alan McIndoe. Admir Salihovic and Mario Banovic got on the scoresheet for Croatia.

West Van now move up to second in the standings, while Croatia drop to 5th after Inter’s win.

While West Van have hit the heights this year, the opposite has been the case for Rino’s Tigers, who excited many when their college guys arrived and with them came a blistering run of form and goals, and a climb up the table. Two points from their last four matches had seen them slip to sixth in the standings, three points ahead of last season’s champions Coquitlam Metro Ford Wolves, who had two games in hand on the Tigers.

That made Friday night’s clash between the two teams at Coquitlam Town Centre a must win clash for Rino’s and the Tigers rose to the occasion to come away with what could be a huge 3-1 win.

Whitecaps Residency alumni Declan Rodriguez set Rino’s on their way in the 14th minute before former SFU Clan man Alexander Kleefeldt added a second three minutes before half time. Tomi Fagbongbe had got on the scoresheet for Metro Ford, and with the home side pressing for the equaliser, UBC striker Kristian Yli-Hietanen secured all three points for the Tigers with a third in the 89th minute.

What a weekend! And all of that leaves the VMSL Premier standings as follows: 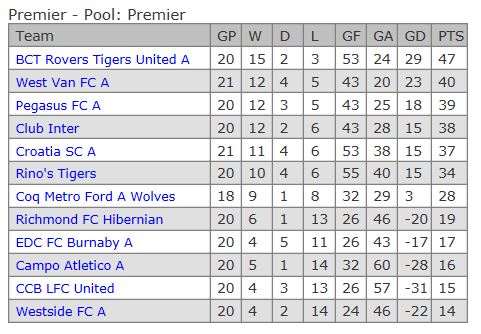 With NVFC Norvan Lions wrapping up the Division 1 title, and promotion to the Premier Division, a few weeks back, the battle for who will me moving up with them got a whole lot more interesting this past weekend.

The fight for that second promotion spot is a two horse race between Guildford FC and ICSF Columbus, who are looking to bounce back at the first attempt. The two teams met at Newton on Friday night and it was the third placed visitors Columbus who came away with all three points following a 2-1 victory.

That win saw Columbus leapfrog Guildford in the table and into second place with two games remaining, but the Surrey lads have a game in hand, so this one is sure to go down to the wire.

It’s Cup action again this coming weekend, with some cracking games to get out and see. You can find all of this week’s fixtures, along with the latest results and standings across all of the divisions at vmslsoccer.com.