I love the Couch Ultras. They are perhaps the Whitecaps’ least known supporter group as most of their activity happens in a basement in Langley where the two of them make small replica posters of the BC Place railing banners and they even have an adorable tifo rig that lifts pieces up the windows towards the ceiling. This year they have come out to WFC2 matches in Langley offering a good local voice, and we’ve had them in BC Place as well.

Last Friday they were at Thunderbird stadium to say goodbye to WFC2, and afterwards they posted a plaintive video of a one man pitch invasion. A single Couch Ultra running to the centre of an abandoned pitch and fiercely waving a Canadian flag with no one else around.

In North America soccer is poised between two cultures. It is organized around mainstream business model of franchises and centralized management and a salary cap and a draft. It has even innovated on that model by having players sign contracts with the league rather than teams.

But it THRIVES on being a counter cultural sport. It sells itself on images of supporter tifo: singing, dancing, deploying banners and smoke and even flares. You could argue that the most iconic teams in the league are the ones with the most active supporter culture: Seattle, Portland, Kansas City, and even Orlando. I sometimes wonder if these images are more powerful marketing tools than some of the players. While a Giovinco, Schweinsteiger, or Kaka is certainly a draw, equally impressive are the Reynas, Almirons, Roldans, and Nikolics and yet their names are rarely known outside their own teams.

There is news this week of the possibility that Columbus Crew, a team that was one bad officiating call away from a MLS Cup two years ago, will soon move to Austin. The Crew were an original MLS team and have survived the turbulent early years of the league to become Cup Champions. If they move they will become the first championship franchise to take their history elsewhere. I’m gutted for their fans, some of whom are friends of mine. It’s hard to watch.

Here in Vancouver we have such a deep history around professional soccer. Through thick and thin, since 1974, there has been a pro-team here and credit is owed to the people who put up their money and time to sustain a team through five different leagues, in various guises, to put a crest on a shirt and carry the pride of Vancouver out to the world. The magic scenes of the 1979 Soccer Bowl Championship cemented the relationship between the city and the team. For those that were here in those years, they are unforgettable. They can’t stop singing along with “White is the Colour.”

The city has loved this team for decades. The owners put up the financial capital, the supporters put up the social capital, and the magic continues year after year. If one of those things gets withdrawn, the Whitecaps wither. The Whitecaps IDEA withers and that is critical, for the owners are temporary custodians of a community institution. They play a role, but it is not THEIR team in the bigger sense. It is ours. All of ours. And we have created it together.

Supporter groups have a role to play here. Curva Collective and the Southsiders meet regularly with the front office to share ideas, to help them grow the love of the game in this city. We want the team to do well, we want the players to be recognized, we want the match day experience to be exceptional, and we want people to come back, participate, watch, and grow to love the team. The owners are smart. They know the supporter’s groups are too. We both want the same thing.

It has been a year of tepid energy in the relationship, despite our on field results leaving us near a record breaking points season, with first place in the West ours to lose. The worst experiences we had this year were with security enforcing bag policies arbitrarily, getting inappropriate at times with the pat downs (MANY women have complained. BC Place – you need to take this seriously), not responding fast enough to legitimate security threats, like a punchy dude in 201 who landed a few haymakers before anyone managed to get rid of him. Even on Sunday, people were asked to remove costumes, children had balloons taken from them and popped. Any attempt to make it a little special in the Southside was treated with the usual robotic and arbitrary responses. The club has heard from us on these issues. Nothing has changed.

This season it was more than security and the issue that stood out the most for me was the way the club made it difficult for the Supporters Groups to implement a general admission solution for the Southside that would have been a game changer. Zach wrote the definitive article on this earlier this year. Suffice to say that, against all odds, the Southsiders are finally implementing a general admission section with the crumbs we’ve been left, Curve Collective will continue to implement theirs, and we all remain separated by a tunnel and empty seats owned by scalpers. It will be up to us to prove that this idea is viable and valuable, not just for the supporters’ groups but for the team as a whole, and we’ll do it. But it could have been so much better. So much better.

All that and that’s not even to mention the club’s embarrassing pre-game tweets celebrating our opponents: the scoring prowess of Atlanta, or the ability of the Timbers to injure our star player. Our social media game has been spotty, our marketing nearly invisible, media coverage relegated mostly to the blogs and podcasts, done with increasing quality but with nowhere near the reach of radio or print. All business decisions. 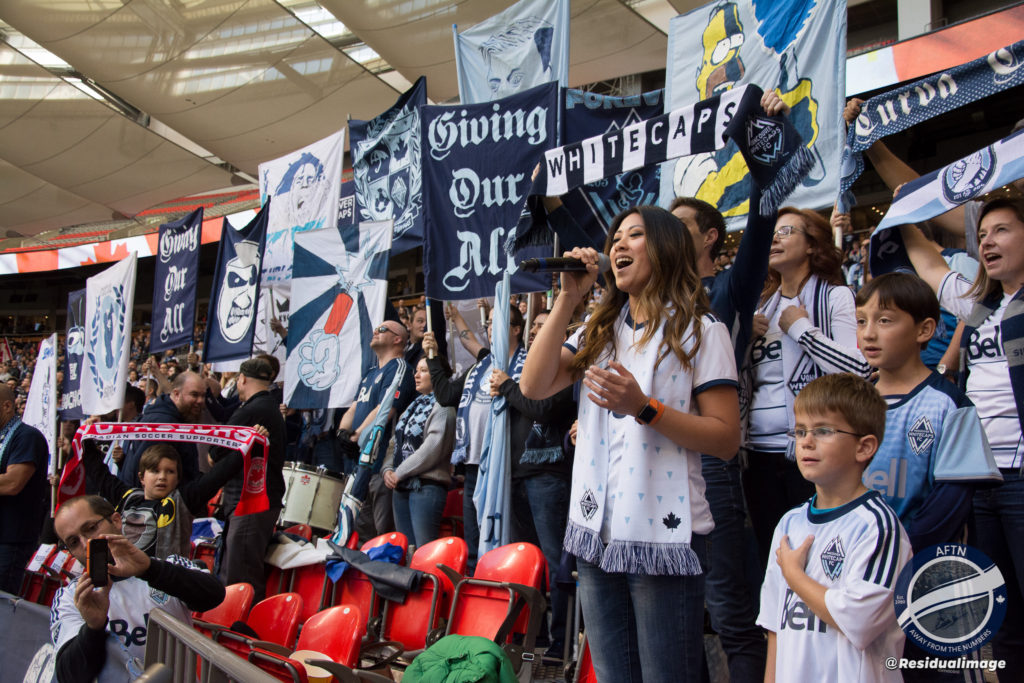 Last Sunday was “Fan Appreciation Night” and it was meant to be an occasion, I guess. The result matters of course, and if we had left with three points, perhaps what I am writing wouldn’t have been as obvious. But Sunday I reflected on the season that had been in the stands up in the Pigeon Loft. It was telling that on a night that was marketed as “Fan Appreciation Night” several folks I engaged with on Twitter said it didn’t feel any different than any other home game.

I was curious about what the club would do to show appreciation to the fans. A few T-shirts handed out, a loyalty points reward given, a couple of words exchanged with the players, Robbo grabbing a mic pre-game and offering some inaudible words about support.

I don’t know anyone who says they felt especially appreciated. We can do better.

But it’s not about a one-off night where, yet again, someone was let down by an advertising promise not delivered upon. It’s bigger than that. That’s the kind of empty gesture that is a weak signal of a disturbing pattern. I sometimes come away from Whitecaps matches having made songs, with my throat raw and my arms tired from drumming and holding Robbie’s two sticks, feeling taken for granted.

There are only three people from the Whitecaps who have ever said “thank you for your support” to my face, Twitter handle or email address: Carl Valentine, David Ousted, and Jordan Harvey. I would, just once, be delighted to be surprised by appreciation.

Look, the Whitecaps is a business, I get that. But it is a business that thrives in a sport and on a continent where it’s competitive advantage is that people DEEPLY LOVE the team and the players and demonstrate it in counter cultural ways. As an organization you can choose how to run your business and engage with the fans and the city.

Soccer will never be number one in North America but the most interesting teams on the continent are iconic because of what is happening in the stands: Atlanta, Portland, Cincinnati, Kansas City, Orlando, Seattle, Toronto… Supporter culture matters because it is the conduit for learning more about how to encourage a community to love a team. And a community that loves a team will never let it go, will support it, and make it profitable for the long term.

So be suspicious of teams that stop reaching out, like they have in Columbus. At some point if the decision comes to move a team to a different city they will first have to alienate the supporters, make them jaded, make them hate you or just not care. Stop marketing. Stop using the faces of players and pumping them up. Stop giving people something to fall in love with. Part them from their money and treat their game day experience and ideas with half hearted interest. Do that long enough and you have options. You can sell the club, move it, or just fold it up and walk away. There is a very simple request at the bottom of all this. Whitecaps FC, work with the supporters groups to help this city fall in love with the team again. Why the supporters groups first? Because, as we say in the Pigeon Loft, “we wave flags and sing anyway.” We already love this team. We are there to support our players, to let them know that we care what they do on the pitch for us, for Vancouver, for the social institution that is Whitecaps FC, a club that never used to shy away from trying to make the city proud.

We are there to represent the long game. The legacy of ’79, of the 86ers, of the Mobilios and the Valentines and the Nashs and, yes, the Hasslis. A club that developed local players and gave them a chance to play on the world stage and contribute to the first team and go on to represent our country. Boys and girls from Coquitlam and Surrey and Bowen Island, pulling on that shirt whether for the first team or the reserves, in the REX or the academy.

This city has a cynical sports culture, but soccer is counter cultural. The way forward does not lie in being the same as hockey or major league baseball. Look at the empty seats across the street. A hockey franchise fattened on TV revenues that never cared about its arena atmosphere. We don’t have to be that. The love and support that is visible in the Southside and buried in the hearts of the long term supporters around this city is there to be activated.

All we want to do is love you. Love you more and love you more deeply. And if you needed more proof, there is always that video of a single supporter standing on an abandoned pitch, waving a Canadian flag, refusing to give away his heart to a mere business decision.