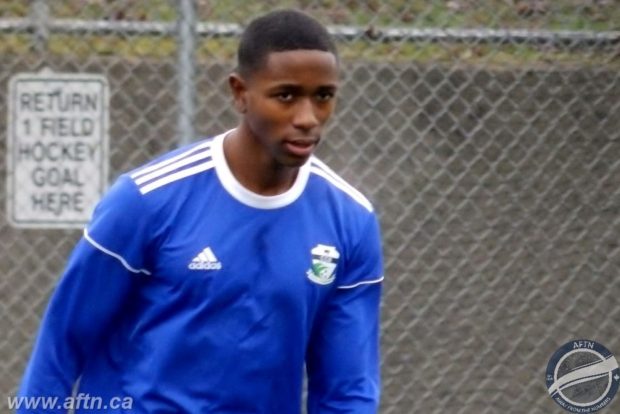 As the VMSL 2017/18 league season winds down, there’s a red hot relegation battle raging at the bottom of the Premier Division table, with just three points separating the five teams trying to avoid the drop.

With three matches remaining, it’s going to be a fantastic end to the season, although the 2018 Imperial Cup, which gets underway this weekend, is going to cause a little bit of disruption as some teams will have to wait longer than others to learn their fate.

It was another good week for CCB LFC United, who pulled off a massive 3-1 win at Coquitlam Metro Ford Wolves on Friday night. Goals from Andy Phillips, SFU Clan’s Mamadi Camara (main picture), and former WFC2 player Gloire Amanda, gave CCB three huge points, moving them off the foot of the table for the first time in weeks.

Tomi Fagbongbe got Metro Ford’s consolation, as they gave up what could be three crucial points in their battle for a Provincial Cup berth. Right now, Coquitlam sit outside the automatic VMSL spots for this year’s provincials, three points back but with two games in hand, although this year’s Imperial Cup finalists could affect that.

While CCB are in an upward trajectory, that couldn’t be further from the truth for Westside FC, who are now in real trouble in the relegation battle. Two goals from former TFC man Nick Soolsma gave league leaders Rovers Tigers United a 2-0 win over Westside at Point Grey on Saturday afternoon. 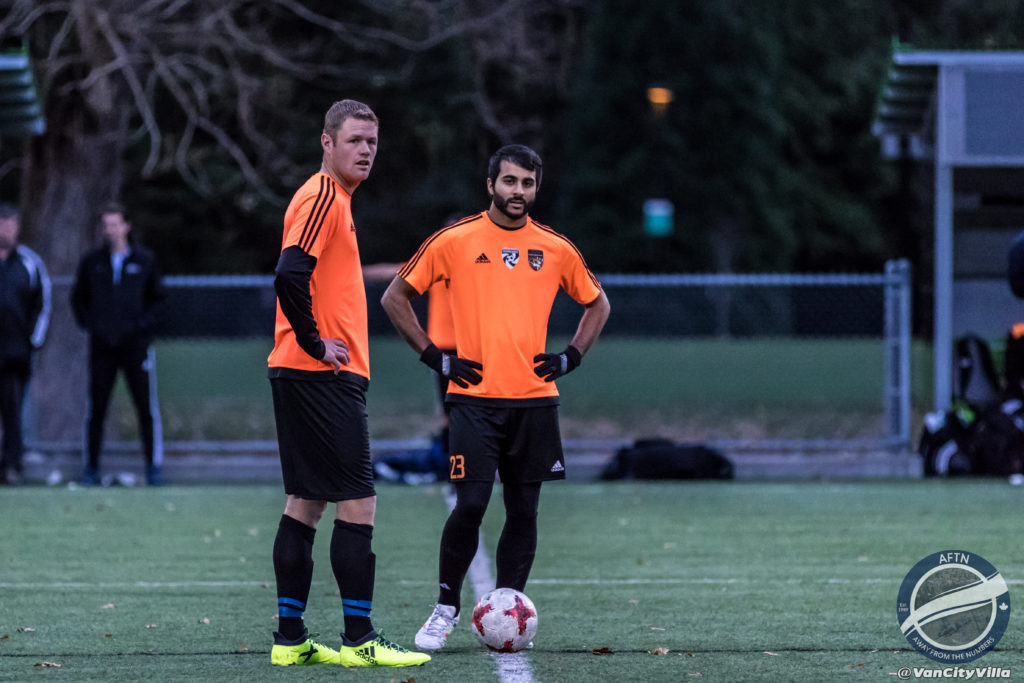 The win increased Rovers Tigers grip on the championship, moving them eight points clear of second placed Pegasus FC and needing five points to clinch the title. The likelihood is that they’ll clinch it before they reach that tally.

Westside’s loss, however, was their ninth straight defeat and the club appear to be in freefall as they sink to the bottom of the table, four points from safety.

Three teams currently sit one point above the two relegation places, with all to play for in the final few weeks of the season.

Campo Atletico feel like the team in the most trouble, with a difficult run-in and trying to snap themselves out of a three game losing streak.

Their latest loss came in a cracker at Burnaby Lake on Friday night, with Campo coming away on the wrong side of a seven goal 4-3 thriller against Croatia SC. A Stefan Kamner hat-trick and a goal from David Zaharija gave Croatia the three points, keeping them in third place in the standings.

Leading scorer Edson Castro scored another two goals for Campo, taking his tally to nine for the season, with Paraic Phelan adding their other. It’s going to be a tough ask for last year’s promoted side, but if they can grab one more win in the run-in, I think they may survive. 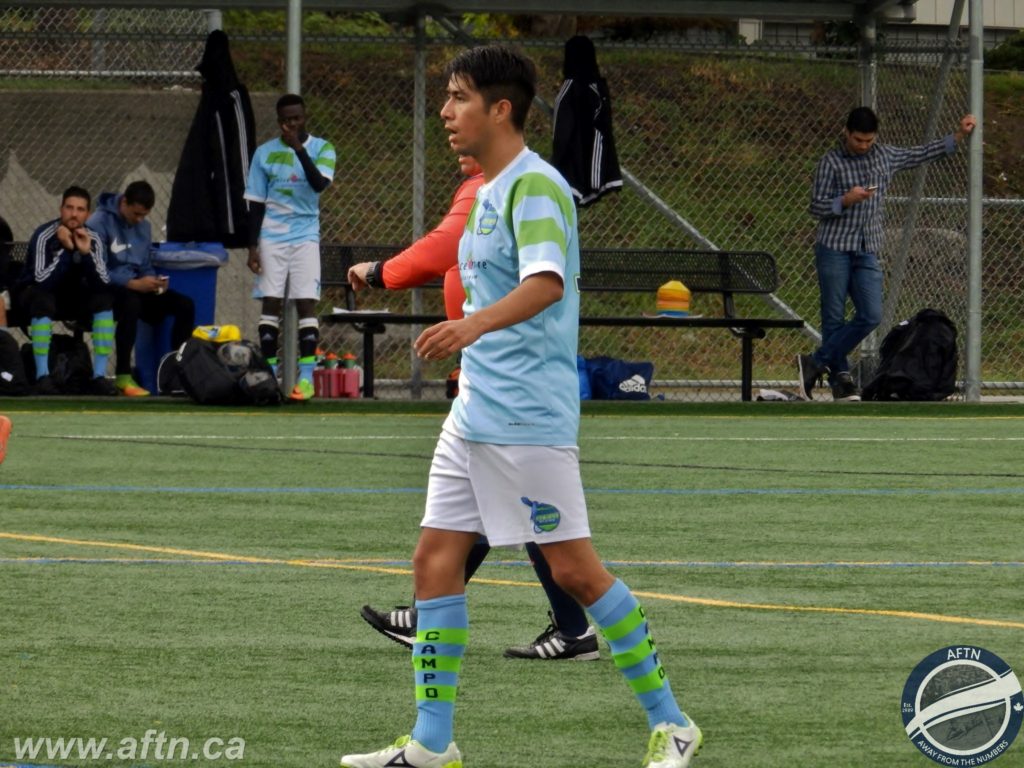 Campo are one of three clubs, along with EDC FC Burnaby and Richmond Hibernian, sitting one point above the drop zone on 16 points.

Goals from Cathal O’Connor and Shane Howard on Friday night gave West Van a 2-0 win over Richmond at Minoru Park, while EDC ground out a 1-1 draw at Rino’s Tigers on Saturday afternoon. Josh Hardy’s goal helped EDC get what could be a vital point, with Erik Edwardson getting on the scoresheet for the home side.

The other match of the weekend saw Club Inter boost their hopes of a Provincial Cup berth with a somewhat of a shock 2-1 win at Pegasus on Friday night. Milad Mehrabi’s ninth of the season, and a fifth goal of the campaign for Milad Rahmati, gave Inter the three points. UBC Thunderbird’s Kerman Pannu got Pegasus’ sole goal.

The loss all but ends the Surrey side’s title hopes, leaving them eight points back of leaders Rovers Tigers, albeit with a game in hand and a meeting coming up next Friday between the two teams. But it’s all out of their own hands now though and they need one hell of a finish to make this happen now.

So all those results leave the VMSL Premier league table looking as follows: 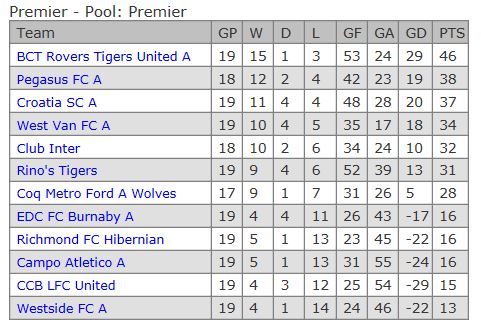 Some great battles coming up this month for both the Provincial Cup spots and the relegation places. It should be noted that goal difference does not come in to play. If teams are level on points, a playoff match (or a round robin playoff group if more than one team is involved) will take place.

With the Imperial Cup getting underway this weekend, the only league matches are West Van v Pegasus and Club Inter v Croatia, so the relegation threatened sides have a week’s respite from that battle.

You can find all this weekend’s fixtures, and a lot more, on vmslsoccer.com.