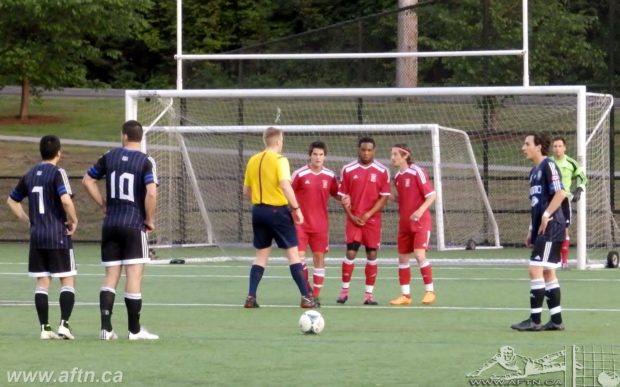 There’s little doubt that the Vancouver Metro Soccer League (VMSL) is by far and away the strongest local league out there right now and has been for a long time. The quality shines through every year in the BC Provincial Cups, with the last five winners of the A Cup all being VMSL sides.

You can make that number six now after this weekend’s quarter-final ties set up an all-VMSL semi-final line-up.

Coquitlam Metro-Ford Wolves, Pacific United, Croatia SC and Pegasus FC all advanced to next weekend’s semis, with a place in the finals in Victoria on the line.

It needed extra time to decide two of the ties, and the action kicked off at Charles Best Secondary in Coquitlam on Friday night, with VMSL champions Metro-Ford needing an extra 30 minutes before seeing off old foes Surrey United Firefighters 2-1.

Coquitlam should have been home and dry in normal time, but found Surrey goalkeeper Mark Village in tremendous form, with save after save keeping the Wolves from the door, and in particular denying Metro-Ford striker Carlo Basso on countless occasions.

Metro-Ford looked the stronger side from the start with Vito Iacobellis having their first chance just four minutes in, but firing wide. Surrey were having possession but struggling to get any impact on the Coquitlam defence, with their best effort coming in the 21st minute when Sean Einarsson shot straight at the keeper.

Village came up big to keep Basso out eight minutes later, getting down low and collecting the ball at the second attempt.

Former Whitecap Jovan Blagojevic broke up the left in the 33rd minute, but his former WFC2 teammate saved his effort, before Sang Hwang fired over for Metro-Ford a few minutes later.

With the game heading into first half stoppage time, the referee gave the home side a free kick in front of goal, 25 yards out. Hwang stepped up and hit a stunning dipping effort, which Village did well to get his hand to, but couldn’t keep out, and Coquitlam headed in to the break one goal up with the last kick of the half.

Surrey needed to come up with something to get back into the match, but as much as they tried to press, it was Coquitlam who were still having the best chances.

Village denied Basso in the 66th minute, knocking the ball out for a corner, which the big striker got his head on but directed it over. Basso got another chance ten minutes later when he was played in by a deflection, but Village was out quick to block his shot and knocked away his rebound.

As the game entered the last ten minutes, Surrey took it up a notch and Reed saw his shot saved by the legs of the Metro-Ford keeper. The rebound came to former Whitecap Steve Kindel, but his goalbound header was cleared for a corner.

The visitors kept pushing and got back on level terms in the 83rd minute, when the referee pointed to the spot for a handball in the box. Einarsson stepped up, sending the keeper the wrong way and the match into extra time.

It only took Coquitlam three minutes of the extra period to get their noses back in front, with what proved to be the winning goal after Ryan Ashlee (I think!) knocked the ball home from a corner.

Metro-Ford nearly added a third a minute before half time in extra time, but saw two shots cleared off the goalline in quick succession by Surrey.

Both teams had a couple of chances in the last 15 but, Coquitlam Metro-Ford Wolves held on fairly comfortably for the win in the end.

We were able to catch the first two of the goals from the game on video, along with a blurry mess of the winner and a couple of other chances, and you can see them below (and Hwang’s beauty of a free kick on it’s own above):

The win keeps Coquitlam Metro-Ford’s treble dreams alive, as they look to add their first Provincial Cup title since 1999 to this year’s VMSL Premier Championship and the Imperial Cup.

You can see some more photos from the match HERE and in our Flickr gallery below.

Friday night’s other match was a more closely contested affair than the final score may indicate, with this year’s dark horses, Pacific United, scored three late goals to see off Fraser Valley side Aldergrove United.

And they’ll be underdogs as they head on the road again (but not very far) next weekend to take on VMSL Premier runners-up Pegasus FC, after they thrashed islanders Nanaimo United 5-0 on Saturday afternoon to set up an all-Surrey semi-final.

It was a tight game throughout, but Cowichan must have fancied their chances of advancing. Even more so when Keevan Webb headed home a Tyler Hughes corner to give them a 1-0 lead with 11 minutes of the match remaining.

Croatia tied it up with five minutes remaining and thought they’d snatched the winner when they had the ball in the back of the net in the final minute, but the referee called it back.

Cowichan started the second half the stronger, but were caught out 12 minutes into extra time, with what proved to be the winning goal for the visitors.

Croatia will now host Coquitlam Metro-Ford next weekend. Can they pull off the upset or will the 2016 Provincial A Cup final be contested between the top two sides in this season’s VMSL?