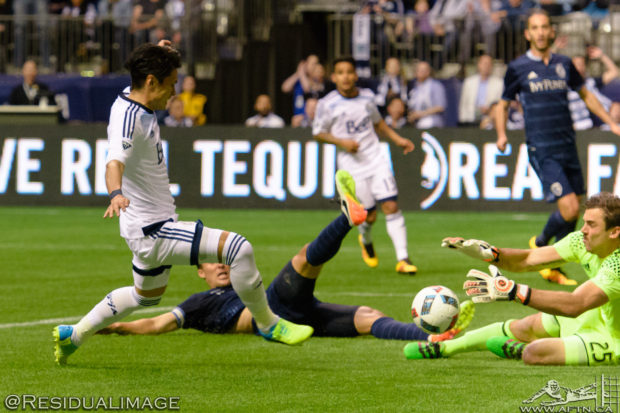 Well here we are getting ready for Champions League action again. After pulling off a win against Trinidadian team Central FC, our second opponent in Group C is fellow MLS Western Conference side Sporting Kansas City.

You might recognise them from such games as the one we just played on Saturday! And the two other times we couldn’t beat them this season.

In MLS they’re several spots above the playoff line after we shot blanks in a frustrating encounter at the weekend. But in the here and now, that’s immaterial as we chase CONCACAF glory.

After our initial win over Central FC, in an away game in Couva, Trinidad, a second victory against KC would put us on the verge of advancing out of the group stage. Six points from two games, and a five point cushion on both other teams, would set us up nicely for the remaining two matches and we could clinch a quarter-final spot in the home game against Central next month.

A loss or even a draw brings Sporting KC right back in the mix, topping the group and likely favourites to advance.

Group permutations aside, the ‘Caps desperately need a win here to chase some kind of success this season.

Things were changed up a little in Saturday’s league encounter against KC. Tim Parker, Matias Laba and Masato Kudo were all rotated out of the starting line-up. Robbo looked to be fielding a tactical rather than pacy team, but it didn’t pay off.

In the previous Champions League game against Central FC, we fielded a relatively young team, with WFC2 call-ups Spencer Richey and Brett Levis getting the start, and two other USL players earning a place on the bench. Throwing in both of those players paid off, with Richey saving a blistering shot from Central, while Levis set up Techera for our only goal of the game.

That kind of young make-up of the team, with a splattering of experience, is likely to continue for this game, falling as it does in-between two “must-win” (although unlikely to win) MLS games, and key players will need to be rested for this one. Since this is not MLS, and we are relatively comfortable at the top of Group C (for now), it’s possible Robbo will experiment some more this game, perhaps even playing with the 3-5-2 that netted us a goal in the dying stages of our loss to San Jose. Or maybe that’s just wishful thinking.

Either way, expect to see Kudo and Nicolas Mezquida making waves on the attack, while in the midfield, Cristian Techera will return to the starting line-up on the right, with young Alphonso Davies most likely to be thrown in on the left. Matias Laba is all but confirmed to start, after being dropped at the weekend, with Russell Teibert the most likely man to come in alongside of him if Robbo goes with that traditional two man defensive shield.

In the backline, Robbo went with a near all-Canadian line-up at the weekend, fielding Aird, De Jong, and Edgar. He may be tempted to go with them again, in an attempt to get the new signings integrated in a less risky environment, but most likely we will see Jordan Smith come back in at right back, with Brett Levis continuing his CCL campaign at left back, making his first appearance after signing a MLS contract. If Robbo did decide to go for the 3-5-2, then Levis can also easily slot in to the left wing role, where he played much of his career prior to his defensive transition this season.

Who the two (or three) centre backs will be is the biggest defensive question, alongside who takes his place between the posts.

Parker looks assured a start after not playing at the weekend, and it could be an all-ginger pairing alongside Cole Seiler, who didn’t play or feature in either the MLS or USL games at the weekend. Pa Modou Kah and David Edgar’s experienced heads helped in the first match with a young backline, and you would have to hope that one or both of them may get the start for another important match.

In goal, Spencer Richey deserves another start after his performance in T&T, but will he get that reward? He played the full USL game on Sunday, so that may mean Paolo Tornaghi comes back in for another start and a bit more experience against MLS opposition.

SKC were all over an anaemic ‘Caps defence last game, peppering David Ousted with shots. If we can’t plug those holes and tighten up the backline our chances for advancing out of the group stage begin looking very bleak. That said, don’t expect this game to look too similar. Both managers will change up rosters and tactics drastically for CONCACAF, which is likely our last chance for success this season.

Jacob Peterson – He was a devastating to us last game (scored their first goal and was fouled for the PK that yielded their second). Whether he will even be involved is a key question, you have to feel not, but if he is, he’s going to look to make a repeat performance.

Dan: 1-0 KC, we bring back some strength to the Whitecaps defence but not enough.