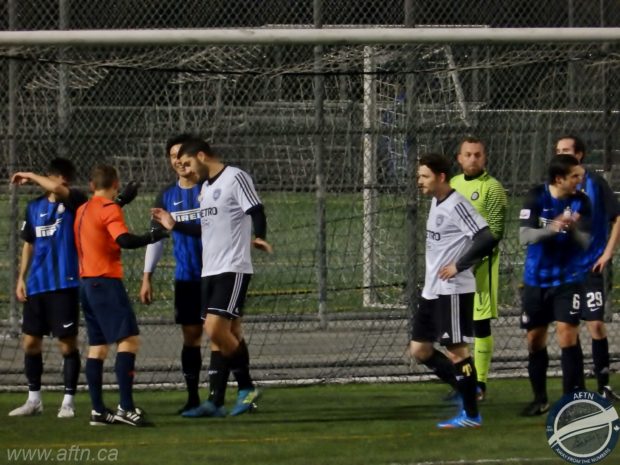 It’s a shame the Christmas break is coming up as the Vancouver Metro Soccer League Premier Division continues to serve up some great action and some twists and turns week upon week.

With just four points separating the top five, and defending champs BCT Rovers Tigers United six points back in sixth but with two games in hand, where this year’s Premier championship is heading is still very much up for the taking.

Week 13 continued to serve up some drama, but it didn’t get off to the most auspicious start with Guildford FC bailing out of their Surrey derby on Friday night, forfeiting their match with CCB LFC United after turning up at Newton with just six players.

The forfeit gave CCB an automatic 3-0 victory, temporarily moving them into first place in the Premier standings.

There was a match played up at Newton on Friday, however, as Rovers Tigers dismantled high flying Croatia SC 4-1. Nick Soolsma hit another brace for the defending champs, taking his tally to the season to 24, with Pavi Dhillon and Cam Hundal getting on the scoresheet as well for the home side.

Emile Saimovici got Croatia’s lone counter, as the loss sent them tumbling down the table from second to fifth.

Friday night’s other match as an entertaining affair at Burnaby Lake, as Coquitlam Metro Ford Wolves continued their fine form of late, extending their winning streak to six matches with a fairly comfortable 3-1 win over Club Inter EDC Burnaby. 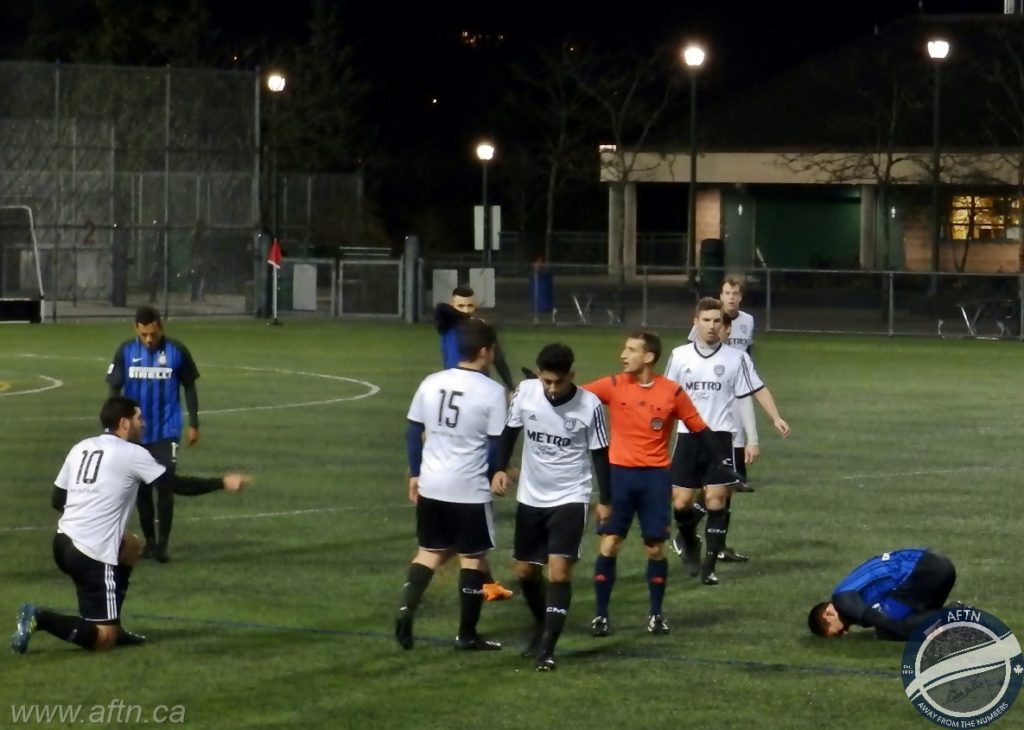 Both sides had attacking forays in the first half, but it was the visitors who were showing the bigger goal threat and the more clinical finish, and Vito Iacobellis rose unchallenged to head home a 14th minute corner to give Metro Ford the lead, and grab his first goal of the season.

When Carlo Basso doubled Coquitlam’s lead two minutes before half time,
it looked a long way back for Inter, with the Wolves looking firmly in control, but the Burnaby boys came roaring back after the restart and pulled one back four minutes into the second half through Rizel Ganief’s looping header.

Inter pushed for the equaliser and looked the more likely side to get the next goal, with Metro Ford all but disappearing as a goalscoring threat, but an individual bit of brilliance from Basso in the 79th minute saw the big striker collect the ball, run in on goal, and finish from a tight angle to give Coquitlam their decisive third and seal all three points for the 2015/16 and 2016/17 Premier champs.

You can see all the goals and some other highlights in our video below:

That win saw Metro Ford finish the weekend three points of the top spot, with a game in hand, and it’s their old foes from West Van FC who continued to hold onto first place with a 2-0 win at home to Campo Atletico on Saturday afternoon.

Goals from Alan McIndoe and Devan Woolley gave the Amblesiders the win over bottom club Campo, who have regrouped and restructured after their 17-1 hammering by Rovers Tigers a fortnight ago and a forfeit of their match last weekend. With a new manager in place, their old coach Eduardo Azmitia, who oversaw back to back promotions, pulling off the great escape at the bottom would still seem unlikely, but you can bet it’s going to at least be entertaining.

Rino’s Tigers got back to winning ways, as the former league leaders bounced back from taking just one point from their last four matches. But they were made to work hard for their 4-3 victory at Trillium against a determined Richmond FC Hibernian side, who are fighting to avoid the drop.

Richmond came out strong and Logan Hooper fired them ahead in the 12th minute, only for Tomi Fagbongbe to get Rino’s back on level terms 15 minutes later. But the visitors had more shocks in store and retook the lead on the half hour mark through Miguel Michelena, and when Hooper grabbed his second and Richmond’s third on the stroke of half time, the shock looked very much on.

But the Tigers roared back in the second half and Erik Edwardson pulled them to within one in the 65th minute, before two goals from Daniel Johnson in the last ten minutes completed Rino’s comeback and gave them three crucial points in their quest for the title.

The final match of the weekend took place in North Vancouver on Saturday afternoon with Pegasus SFC heading over the Ironworkers Bridge and coming back with all three points after a 3-1 win over NVFC Norvan. Chetan Jhooty, Manraj Bains, and Sahil Sandhu got the goals for the Horsemen, with Gianmarco Pensato grabbing Norvan’s consolation.

And all those results leave the VMSL Premier standings as follows: 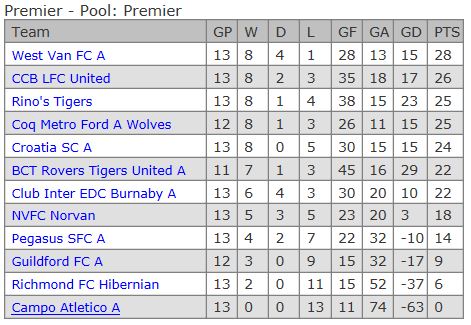 There’s two rounds of matches left before the Christmas break, with things tighter than a gnat’s chuff. You can find all of this weekend’s fixtures, and all the results and standings across all seven VMSL divisions over on VMSLsoccer.com and catch all the local soccer banter on the Take The Piss forums.

Get out if you can this weekend and enjoy some local soccer action.