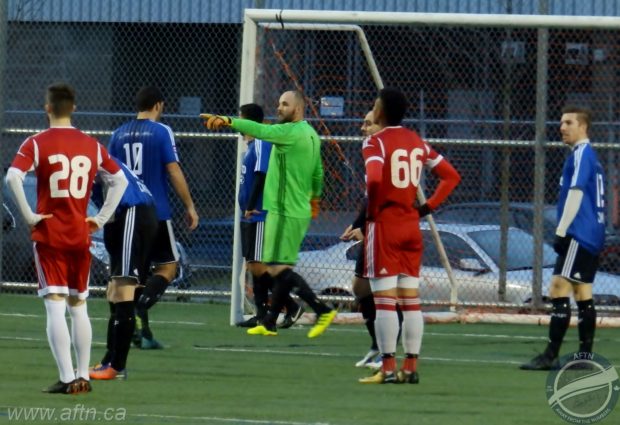 The VMSL Premier Division saw its last action of 2018 this past weekend, or at least most of the teams scheduled to play did.

And the year finished with Rino’s Tigers and West Van FC atop the VMSL Premier standings by a single point, with only three points separating the top five teams.

Most teams have seven matches remaining of their season once the league resumes after the Christmas break, but with others having games in hand, the run-in is going to be one of the most exciting for years, with seven of the sides still realistically harbouring some dreams of championship glory.

The last weekend of the year’s action didn’t get off to the most auspicious start, with one of the linesmen failing to turn up at Newton leading to the postponement of then leaders CCB LFC United’s match with Club Inter EDC Burnaby.

A match did take place at Newton on Friday night though and it saw defending champs BCT Rovers Tigers United make it three wins on the bounce with a 3-0 victory of Richmond FC Hibernian thanks to another Nick Soolsma hat-trick.

The former TFC man struck in the 9th, 24th, and 68th minutes to give the Tigers the points and see them move to within three points of first place but with two games in hand.

Friday’s other game saw Croatia SC get past Campo Atletico 2-0 at Burnaby Lake thanks to goals from Emile Saimovici and Noah Owen. That win saw Croatia temporarily move into top spot, but it was to be a short lived table topping, for now at least.

The reason for that were wins on Saturday by Rino’s Tigers and West Van FC, victories that saw both sides leapfrog Croatia for a share of first place by just a single point.

Rino’s Tigers were made to work hard for their three points and were forced to come from behind to see off the challenge of Coquitlam Metro Ford Wolves 3-1 at Trillium. 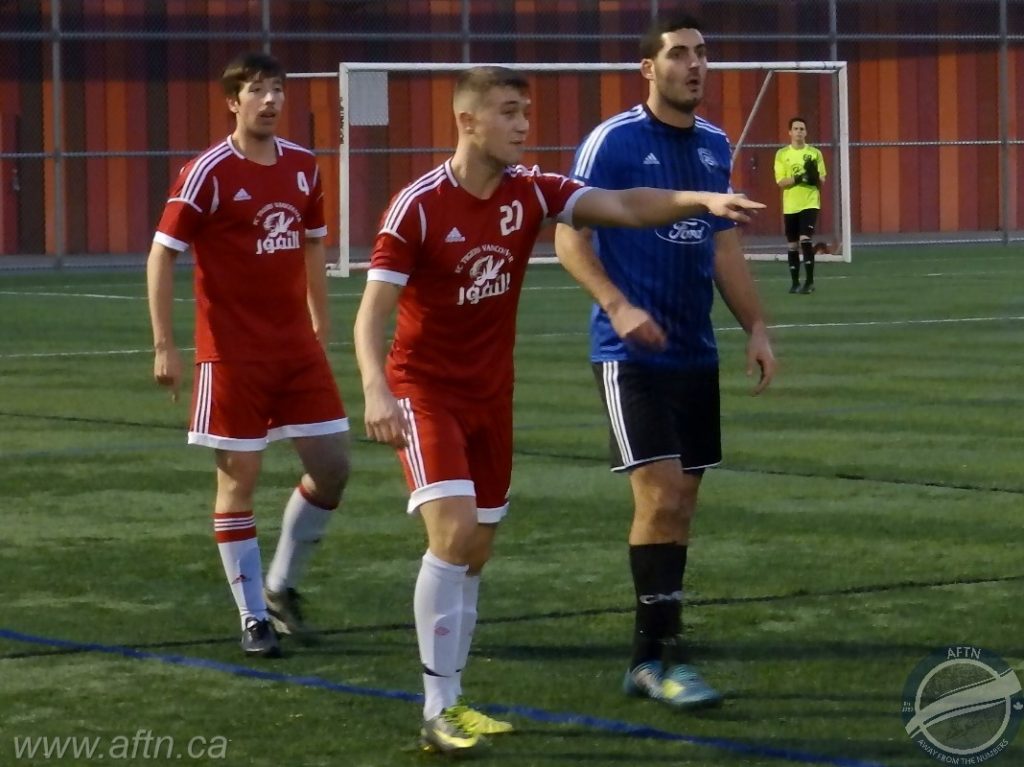 The former back to back champs got off to a dream start just 70 seconds in when Juan Sanchez picked the ball up with his back 20 yards from goal. The Wolves striker turned brilliantly to fire the ball into the bottom left hand corner of the net and give the visitors the early advantage.

Metro Ford were dominant for the opening quarter of an hour and could easily have been three or four up if it hadn’t have been for a couple of big saves from Rino’s keeper Jackson Gardner and the post.

But the Tigers weathered the storm and got themselves back on level terms in the 21st minute when Elyad Shojaei tucked away a low Daniel Johnson cross.

After that it was Rino’s who were in the ascendency for much of the rest of the match, as Coquitlam disappeared as much of an attacking threat. But after having a goal disallowed, hitting the post, and seeing the Metro Ford keeper pull off a couple of big saves, it was looking like it wasn’t going to be their day and a share of the spoils was on the cards.

But Erik Edwardson had other ideas, and the former Portland Pilot and TSS Rovers man tucked away a couple of goals in the 82nd and 90th minutes to see Rino’s grab three massive points, taking his own tally for the season to 14.

You can see all the goals, and some other highlights from the match, in our video below:

Rino’s regained the lead they’ve held for so long this season with the win, and they now share top spot with West Van, who had a fairly comfortable 3-0 victory over Pegasus SFC at Ambleside on Saturday afternoon, but they also left it late before securing the three points.

Kiya Darbandi put the home side in the lead in the 7th minute, but that was how it stayed until the final 15 minutes. Colin Phillips finally doubled West Van’s lead in the 75th minute and a minute later Dylan Bams sealed the deal and the victory.

The VMSL Premier’s last match of 2018 was at Fen Burdett Mahon Stadium in North Vancouver as NVFC Norvan hosted Guildford FC. Unfortunately it was a game that didn’t reach the full 90 minutes, with the referee calling the game off four minutes before half time, with the scores tied at 0-0. The remaining 49 minutes will be rescheduled for another date.

So after all that drama and twists and turns, the final VMSL Premier Division standings of the year looks as follows: 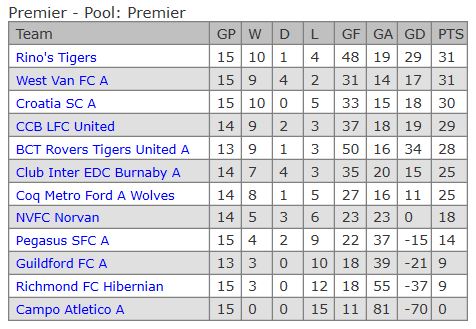 Burnaby Metro still have to play both of the top teams down the stretch, so a lot can still change in the remaining seven matches, and they face Columbus at Burnaby Lake when the teams get back in action on Friday January 4th. That should be a cracker.

Undefeated Provincial B Cup champions Vancouver Strikers look all but assured promotion and the Division 2A championship. They have a commanding ten point lead over second placed Metropolitan FC at the Christmas break, with seven matches remaining.

Division 2B is down to a two team battle between FC Serbia United and Westside FC Sierra. Serbia lead the way on 36 points, but Sierra sit five points behind in second, with two games in hand. The two teams are set to meet at Burnaby Lake on Sunday February 3rd, in what could be a tasty title decider.

Over in Division 3, Coquitlam Metro Ford Lobos, Marpole Tropics, and GFC United Lions finish the year as league leaders in the three pools.

You can get all the latest results, standings, and the remaining fixtures for the season at VMSLsoccer.com. And don’t forget to check out the forums at TakeThePiss.com for all your local football banter.